The 'National Workers Conference to Organize the Fightback' met in Chicago Oct. 6-8, to share experiences and to launch a new solidarity network

The 'National Workers Conference to Organize the Fightback' met in Chicago Oct. 6-8, to share experiences and to launch a new solidarity network 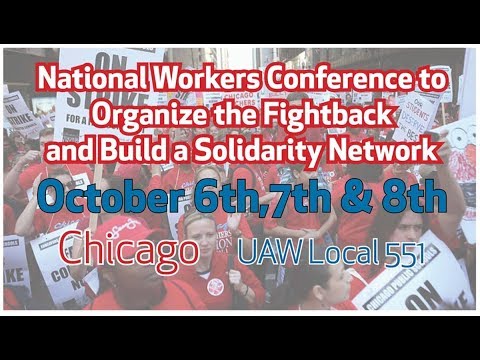 C. PENA: …historic labor conference, hosted by UAW Local 551. Yeah, give it up. Alright. I am Chris Pena, president of Local 551 and it is my honor to welcome you to the National Workers Conference here in Chicago.

ASHLEY ROSE: Now you got people that’s trying to go back to school like me, can’t afford it. You know what I’m saying? I don’t know if you all can hear me but I’m sick right now. I can’t go to the emergency room or to the doctor because I have no health insurance, because I can’t afford. The reason why I say we need a union at McDonald’s is because it’s a lot of things that happen in McDonald’s behind those counters that no one knows about.

CARMEN MATA: I’m here today with you, representing 80,000 agricultural workers. They become very, very, wealthy. Off our work, and also our deaths in the fields. And our people die. Enslaved in their own land, on their own soil. When we the Mixteco indigenous populations the land belonged to us, we lived off the land. And now it’s these corporations that have crossed the border that they now have taken control of our land.

C. JENNINGS: November of 2012, less than 200 fast food workers in the city of New York walked off the job, went on strike and demanded 15 and the right to have a union. That was really the spark of a movement where then what happened in New York, it then spread to the Midwest, Chicago. Following that November, in April, Chicago workers went on strike, as well as workers in Milwaukee, St. Louis, Detroit. And then it spread from coast to coast.

When we said 15 in 2012, did folks think that was realistic? Hell no. President Obama came out saying, “I’m for $9 an hour,” right? And they called him a socialist. What we can say today is that since this campaign has started, 22 million working folks have gotten a raise of a dollar or more. That’s over 40 billion dollars that are in working people’s pockets as a result of this campaign.

DANIEL VILLA: In New York City alone, it’s around $30 million a week, a week, that the employers do not pay workers. Of course, when you’re undocumented and you go to a construction company or restaurant and they take you in very warmly and they invite you to be part of the company, you think that they love you. They love undocumented workers. And they love undocumented workers because they can exploit the hell out of them. And then when they don’t get paid, 95% of them are really terrified to even cross,I went with some workers that we won a case, $330,000, last year for workers in a car wash.

They were afraid to cross the line going into the courtroom because it was a federal court, you know what that means.

HERBERT CLAROS: Your organizations, both in the workplace, national and international to fight against the effects of the capitalism. The arrival of Trump to the power leaves evidence the true face of imperialism. Political imperialists was in operation of several countries, with companies catered] around the road. As General Motors, Ford, McDonald’s, Apple, Shell, banks and many others. Trump represents further that side of capitalism carefree.

With the environment and the immigrants, the world saw the major events that occurred in your country. The big women’s demonstration and the struggle against racism and the policy violence here inspired other struggles around the world.

ANA GUAJARDO: But here in the southeast side of Chicago, we’ve actually conducted a survey in 2010, in particular the Tenth Ward to determine what’s happening in our community. We surveyed a lot of workers to see which businesses were exploiting, taking advantage of workers. In particular stealing their wages, not paying overtime, as well as many other conditions in the workplace.

The study was pretty interesting. Aside from getting the names of the business owners that are violators in our community and we’re talking about small mom-and-pop shops. Many of them are, unfortunately, immigrant owners, as well as others. We found that 38% of the workers that we surveyed experienced one form of wage theft. When we talk about industry, 65% of the workers worked in the service sector. 57% childcare and 44% retail. We also found out that women, in particular, were the ones to experience more issues in the workplace.

B. CARNEGIE: In my working life I’ve had 77 jobs. 77 different employers. I’ve been moved on. I’ve been arrested 29 times on picket lines. I’ve done 23 days in maximum security prison. I was chocked unsenseless by four police. I got charged, eight of those 29 convictions are for serious assault on police charges including one which in English law is called bodily harm because the police officer broke his arm smashing me in the head over a bonnet of a car.

But the strangulation lots of working class people within the trade union movement have felt, by their own bureaucracies, have in some way and that has definitely enabled the boss to strangle us a lot faster. Because they’ve been too busy worried about how much of a pay raise I can get, how good my life can be, and forgetting about the man and the woman on the shop floor, which is the key to everything.

I was offered to fly business class to get here. Not from the IDC but one of my people in my, they said, “You can’t fly 22 hours,” you know, and I’ve had five operations on me spine and all that sort of crap. And I said, “I’ll tell you what I’ll do. Is that I’ll fly the same class that my membership fly which is economy class. I’ll stay in the same hotels that my membership stay in which is normal. Because who am I to be any step ahead?”

So, all that sort of crap that goes on within the labor movement has to come to an end, okay. Really.

AL ROJAS: But so far the corporations in this country have put every working person, immigrant, people who live in this country, union, nonunion, under brutal attack. Decimate all the benefits that we, through the history of the labor movement in this country and other countries too, of the corporations which I consider to be the capitalist system. Which means, profit or people whether it’s life or death. That’s what we’re talking about.

Some of us, like myself and my family, and many other families, struggle to build a farm worker’s union. They killed us, they beat, they put us in prison.

FRANK HAMMER: And GM has a practice, not only in Columbia, but in Brazil, as well as in India and other countries, where if you have a surplus labor force, what you do is you use up workers and when you’re done using them up you get rid of them and you bring in some fresh meat. They come in, and they’ve got another workers and it’s this continuing round table of spitting out workers and bringing in new ones.

In 2011, hundreds of workers were fired by General Motors in Columbia. To GM’s surprise, some of the workers decided that this was a real injustice and they fought back. To say that it’s a difficult proposition for injured workers who have been cast out of their jobs with no worker’s compensation, cheated out of their life, unable to support their families, to see what kind of a fight back those workers have waged, which is ongoing to this day, is really something that we can all learn a few lessons from. And one of them has to do with the spirit of continuing to struggle until we win, however long it might take. However long it might take.

Activists Push Back Against Conservative Threat to Safe and Legal Abortion

Brazilians Remember Marielle Franco on Anniversary of her Assassination

$15 Minimum Wage: Job Killer or Path Out of Poverty?