A New Generation of Paramilitary Groups is Killing Social Activists in Colombia (pt. 2/2)

On July 30th, 2017 armed gunmen went looking for Bladimir Sanchez Espitia at a relative's house in Bogota, Colombia, and forced their way into the building, terrorizing the housekeeper and some neighbors. Sanchez was not there, because he is hiding, sleeping in a different house every night

On July 30th, 2017 armed gunmen went looking for Bladimir Sanchez Espitia at a relative's house in Bogota, Colombia, and forced their way into the building, terrorizing the housekeeper and some neighbors. Sanchez was not there, because he is hiding, sleeping in a different house every night 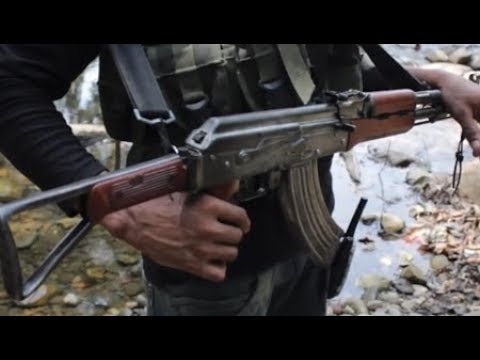 (Bladimir Sanchez) Colombia is not only [suffering] an armed conflict but also a socio-environmental one. Were transnational corporations grab the land [turning indigenous and farmers into refugees].

(Oscar León): Colombia is the most dangerous country in the world for activists. On June 8th, 2017 Telesur reported that just this year, there were already 57 social activists assassinated by the paramilitary in Colombia, the number keeps going up.

Journalist are also targeted by these groups, among them is Bladimir Sanchez Espitia, a collaborator of The Real News.

(Bladimir Sanchez) What kind of impact has the mining sector had in Colombia?

I mean we’ll have to talk about the whole [big] oil & mining “Locomotor”.

The [worst] impact happens in regions where originally there was no paramilitary, right before the oil industry arrives to a region paramilitarism arrives.

When the mining industry arrives to a region the local leaders mysteriously start to disappear.

Oscar León: According to a 2013 study by Colombia’s National Center for Historical Memory, in 25 years of conflict there has been as many as 220,000 people that have lost their lives.

By 2014, the UN High Commissioner for Refugees announced that more than 6 million civilians have been forced from their homes.

(Bladimir Sanchez) There are studies that shows that the mining industry has displaced more civilians, indigenous and farmers than the armed conflict itself.

Oscar León: Bladimir tries to record the memory of the victims of the conflict, his documentaries speak of broken towns mourning the disappearing and murder of it’s members and leaders.

They also speak of contaminated rivers and jungles, a Colombia which for decades has been ravaged for it’s raw resources, by local warlords and politicians acting in behalf of giant transnational corporations.

Like “Casanare, Oil and Terror”, were he describes how in the name of security, since the 80’s amid the armed conflict, paramilitary were hired to take care of mining and oil projects; often times they ended up displacing communities or murdering town members and leaders, who opposed to projects, like the project in the town of Casanare and it’s people..

Labeled “guerrilla members” or “communists” in threatening death letters, even if they were not, environmentalists and trade unionists had to leave town or face the consequences, BBC reported that since 1977 to 2013, around 3000 trade union organizers have been murdered.

(Bladimir Sanchez) All these people who end up being victims, murdered, disappeared or displaced, were all the key actors opposing energy projects.

Who were either standing up for human rights, or protecting the environment. Human rights activists and environmental defenders. And they end up being invisible because regional and local media are silent to these stories.

Because mining industries are some of Colombia’s major tv and media income sources.

In Colombia the number one TV advertiser is the government and number two on that list are the mining companies.

So it is hard to deal with the terror caused by the mining industry, that not only destroy and contaminates the environment but also damages the social fabric, ruins the economy and the productive chain of any farming community.

When they steal the land and destroy the land, they destroy the social fabric, creating conflicts within the communities.

(Oscar León): Many times leaders are not protected, despite documented and credible threats made to them, like Bernardo Cuero who was denied protection by the state, and who was then murdered; or Flor Alba Nuñes Vargas shot in the door of the radio where she worked, she was also unprotected despite multiple threats made to her.

Last Sunday July 30th such armed gunmen went looking for Bladimir Sanchez Espitia, at his uncle’s house just outside Bogota, at 2:30am, they forced their way into the building terrorizing the caretaker and some neighbors, by the time they enter the apartment the uncle had escaped.

A police investigation is on course and Bladimir was given the most basic degree of protection by the UNP (the Colombian Agency for protection), which he deems not enough, while surf-coaching at friend’s houses, hiding, knowing they are waiting for him at his home. It is not the first time he has been threatened and gone into hiding, however this time the body count goes up by the day.

Since the signing of the peace accord, and the eventual relocation of the FARC combatants to designated areas; Paramilitary bands have moved in and taken over their areas of influence, killing social organizers and left leaning politicians just the same.

This is a very real and brutal language of horror, warning the rest of the town not to oppose a given energy or mining project or not to denounce corruption by elected officials.

(Bladimir Sanchez) The mining industry has beefed up the “war’s economy, not only the paramilitary and the Army but also the guerrillas themselves. The mining conflict was a difficult issue on the Peace Negotiations, the FARC had to set aside to be able to reach peace.

If the FARC hadn’t concede their demands around the mining conflict, most likely, there would be no peace.

This subject of the mining companies in Colombia represents very powerful US & Canada financial interest, these are people who have much capital and power around the world, we are also talking about the colombian elite families who own the media and hold large contracts with oil, mining and hydroelectric corporations.

I document and produce documentaries, [researching] the environmental conflict all around Colombia, about indigenous and farmers affected by the oil & mining “industrial locomotive”. These are vulnerable populations, that end up being damaged by the alleged “progress” our government along with the transnational mining corporations often promise.

And while working as an investigative reporter I have been threatened with death, persecuted and stigmatized.

I have received a considerable number of threats in many ways, they’ve already tried to kill me, they stole information from me too.

All this for the only reason of telling the stories that the Colombian government wants to keep quiet.