A New Generation of Paramilitary Groups are Killing Social Activists in Colombia Colombia is one of the most dangerous countries in the world for social activists. We speak to Bladimir Sanchez Espitia, a TRNN collaborator who documents cases of human rights violations and has received a "death letter" himself

A New Generation of Paramilitary Groups are Killing Social Activists in Colombia Colombia is one of the most dangerous countries in the world for social activists. We speak to Bladimir Sanchez Espitia, a TRNN collaborator who documents cases of human rights violations and has received a "death letter" himself 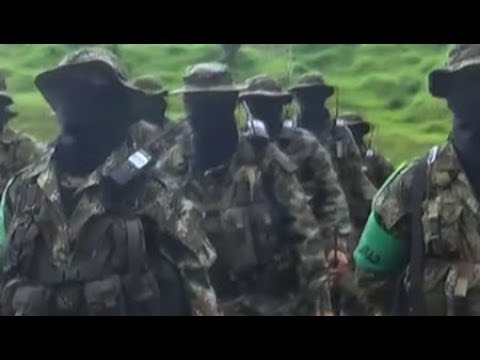 Oscar Leon: Colombia is the most dangerous country in the world for social activists. After 52 years of war, peace was declared, when guerrilla commander Timoleón Jiménez and President Juan Manuel Santos both ordered their respective parties to cease all hostilities starting Monday August 29, 2016, almost a year ago.

It was an ideological war, on which what began as a campesino army, the Colombian Revolutionary Armed Forces or FARC, fought against the army and paramilitary groups for control of the country.

In the crossfire of such conflict, social or even political organizing became a suicidal task, 30 years ago, almost all of the Union Patriotica members were hunted and executed, 104 candidates or elected officials including 8 congressmen and 2 presidential candidates, and up to 5000 party members, students, communists, peasant leaders and trade unionists, all of whom were exterminated by paramilitary.

Now it’s the members of Marcha Patriotica, a similar party, the ones being kidnapped, tortured and killed by a new generation of paramilitary bands.

Just like 30 years ago political victims are not the only casualties, social organizers and environmentalists are under constant threat, “death letters” are received by many who have had the courage to stand in the way of big business.

Journalist are also targeted by these groups, among them is Bladimir Sanchez Espitia, a collaborator of The Real News.

I go around Colombia covering and documenting cases related to Human Right abuses, especially those dealing with transnational corporations. It’s all related with the [big] oil & mining “Locomotor”.

Despite the Peace Process and the decreasing numbers of victims on the military and guerrilla sides; the killing of social leaders, trade union activist and human right defenders continues, so my focus is to tell these stories and make the world know.

Oscar Leon: According to a 2013 study by Colombia’s National Centre for Historical Memory, as many as 220,000 people have lost their lives to this conflict.

By 2014, the UN High Commissioner for Refugees announced that more than 6 million civilians have been forced from their homes.

This is one of the largest refugee populations in the world, second only to Syria.

Of course the threats I have received are related with my research and [often critical] journalistic work. Focused as I am on defending human rights.

And that …maybe, will end up making me a victim, of this conflict on which economic, land owning rights and political interests collide. Yet… we continue to do journalism trying to defend human rights.

So we suspect that because of that work I do, the death threat was originated. There are many leads, according to our findings the threats come from the paramilitary or could it be law enforcement too, as in police or the army.

After all there is a very credible report detailing that in the last years more than 1600 cops have been fired because of corruption, [for example] the case we have out in the press of district attorney who sold witnesses information, there are also judges who can be bought.

This is a very complicated country, because the armed conflict is part of a larger socio-environmental, economic and political conflict.

However corruption stands tall above all, as the origin of all conflicts.

Oscar Leon: During the second half of the 1980’s the country saw a clear example of such corruption: the infamous case of the “false positives”, a practice on which farmers and civilians were murdered and disguised as guerrilla members by state army officials seeking to advance their careers by producing more enemy kills.

As of June 2012, a total of 3,350 “false positives” have been investigated in all parts of the country and verdicts have been reached in 170 cases.

Paramilitarism is not something only happening in remote regions [when armed forces controls rural areas]. The paramilitary forces are intimately related to the Ministry of Defense. The paramilitary work with the Colombian Army. Ok?

Not long ago we produced a documentary, a meticulous investigation piece, produced with a couple of NGO’s, (Cospad and one from UK) and in conjunction with a fellow journalist from UK.

Oscar Leon: During the Peace Process which began in La Havana, Cuba in 2012 and lasted 4 years, one of the most controversial points, was that the FARC combatants doubted that the Colombian Government could protect them, from a potential wave of political assassinations by the Bacrim.

The President and the Minister of Defense, have many times said to the media that “paramilitarism does not exist [in Colombia]”, that it is “a paper lie” or regular “informal crime”.

Many investigative reporters, NGO’s, lawyers collective’s and international organizations, had carefully looked into the issue and concluded that the existence of paramilitarism is evident.

This is very concerning and dangerous for peace, so far 7 former FARC combatants and their families have being murdered.

Oscar Leon: On June 8th, 2017 Telesur reported that just this year, there were already 57 social activists assassinated of the paramilitary in Colombia.

BBC reported that since 1977 to 2013, around 3000 trade union organizers have been murdered, making Colombia the most dangerous place to organize.

Like Bernardo Cuero murdered in January 2017 after the state denied him protection despite severe threats made to him, or William Oime, an indigenous governor of a rainforest reserve who opposed a mining project in the jungle, or Sharon Dayana Marmol the 14 year old daughter of a community leader, murdered to teach his dad a lesson.

These are just a few examples of a broader pattern of terror used to control dissent and submit populations.

This is a very sensitive issue which has proven really hard to cover. To expose this to the public light comes at a cost. And us journalist are the ones who “foot the bill”, we are stigmatized, threatened and persecuted and in some cases journalist are murdered, they end up murdered, displaced from their original regions or exiled, having to leave the country.

Oscar Leon: According to a 2014 report by United Nations High Commissioner for Human Rights, the BACRIM are the main groups responsible for the great majority of Human Right violations in modern colombia, in many cases lead and operated by former AUC paramilitary leaders who gravitate around the drug business.

Todd Howland from the UNHCR, confirmed what seems to be a play straight out of the book by the “Autodefensas Unidas”: that “the BACRIM almost regularly use terror to inflict social control that continues to affect the full range of human rights of the population, In particular those of the defenders of human rights, community leaders, public officials, police and land claimants.” CLAY-MENTS

Colombia is not only [suffering] an armed conflict but also a socio-environmental one. Were transnational corporations grab the land [turning indigenous and farmers into refugees].

Oscar Leon: The daily Newspaper “El Tiempo” reports that since 2012, there is a total 332,000 victims, counting extortion, rape, kidnapping, torture and land theft; 8,194 assassinations and 560 disappeared, who are likely to have been murdered as well.

The General Attorney has an open file on my case, I filed a complaint, many NGO are aware of it. There are many other journalist and human rights defenders at risk, my case is not the only one.

There are many other journalist and human rights observers who are under threat, whose life is in danger.

Well… [I do] speak about these subjects, of human right defense, [I also do] journalism and uncover paramilitarism and it’s supporters.

Many of us know that paramilitarism belongs to many army high commands. That narco traffickers work hand by hand with ranking officers of the Ministry of Defense, Army, Navy and Police.

So… to say all these things is to “place a rope around your neck”.

Watch Part 2 of this interview at TheRealNews.com