The Mexican Federal Government negotiated a deal with the "Autodefensas", or community militias, as they fight to loosen the drug cartel's monopoly on power and violence in the Mexican state of Michoacan

The Mexican Federal Government negotiated a deal with the "Autodefensas", or community militias, as they fight to loosen the drug cartel's monopoly on power and violence in the Mexican state of Michoacan 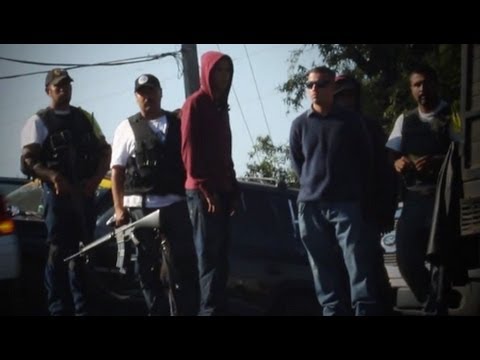 OSCAR LEÓN, TRNN PRODUCER: In Michoacán, Mexico, the federal government reported on Monday, January 27, that it had reached an agreement to incorporate the local community militias called “Autodefensas” or “self defenses” into quasi-military units called defense corps.

The militias have fought for over a year to seize control of the state from the hands of a violent criminal gang called “La Caballeros Templarios” or “Templar Knights” that has held power for the last 4 years. The gang has been reported to make as much as $74.6 million a year through drug trafficking and extortion rings.

MILITIA FIGHTER (SUBTITLED TRANSL.): How much did they pay you?

MILITIA FIGHTER: How many did you torture?

MILITIA FIGHTER: How many are “several”? Around how many?

LEÓN: The Mexican southwestern state of Michoacán is a very productive agricultural hub for lemons and avocado exports.

Fishing and mining are also a major part of the local economy. Its strategic location on the Pacific coast and next to the State of Mexico makes it a real prize for narco trafficking bands, which over the years have fought among each other to control it.

According to Mexico’s Proceso magazine, since 1990, when the Valencia Cartel cultivated marijuana, eventually using the area to smuggle and send cocaine up north, the zone was a profitable area for producing and trafficking drugs. At the turn of the century, the Valencia cartel, allied with “El Chapo” Guzmán to defend its territory against a new enemy, Los Zetas, former military commandos turned into hitmen and drug lords.

The Los Zetas Cartel took over the area in 2001, producing meth and other syntethic drugs for U.S. market. However, the infamous Los Zetas cruelty, severing heads and hanging people from trees in public sight, was not enough against another vicious cartel, La Familia Michoacana, which since 2006 disputed and eventually took over Michoacán.

The war for control and the eventual reign of Los Caballeros Templarios, after the fragmentation of La Familia, left the population terrified.

The Templar Knights started out by moving crystal meth into U.S. and inside Mexico. They eventually grew large and wealth enough, taking over Michoacán and the local economy through meticulous schemes of extorting the population.

ESTANISLAO BELTRAN, “SELF-DEFENSE” MILITIA SPOKESPERSON (SUBTITLED TRANSL.): They took a cut of everything, of every business. If you sell a cow to be sacrificed, you have to give them a cut, about 10 pesos for every kilogram of meat.

LEÓN: This is the voice of Estanislao Beltran, spokesperson for the militia that formed a year ago and continued to grow while successfully fighting the criminal gangs.

It has been reported that they have taken control of over 20 municipalities out of 113 in Michoacán, “cleaning” the towns of criminal elements, and then setting up checkpoints to tightly control over who goes in and who goes out.

BELTRAN: Yesterday we called the media to testify how we were returning some houses that the criminals had taken over to their original and rightful owners, from 32 families. So yesterday we returned some avocado farms. You won’t believe how happy the owners became. We are going to return all the stolen goods we take from the criminals to the people.

LEÓN: The autodefensas have been returning houses and farms to the original owners or their families, because in many cases they were murdered after signing a deed at gunpoint, leaving the farms to the criminal bands’ leaders, who assaulted the properties bringing a public lawyer, who many times also by gunpoint validated such operations.

The local militias have also seized the houses of many narco bosses, who lived in impressive luxury.

BELTRAN: The people got tired of all that and decided to rise their fists and initiate an armed fight to defeat organized crime, especially the Templar Knights, which dominates and designates authorities here in Michoacán State. They determine who will be municipal president and who will work in the state government. They control it all, all of the local politicians, and even the state economy.

LEÓN: The agreement comes to break a growing tension between the government and the autodefensas supported by the population. On January 13, a week ago, on January 13, after liberating the town of Nueva Italia, or New Italy, the militias finally surrounded Apatzingán, the main city in Michoacán’s central zone and a stronghold of the Templar Knights. The autodefensas regrouped outside the city to prepare the offensive that will finally liberate the area.

However events took a turn when the governor of Michoacán himself brought the Mexican and launched a security plan by disarming some militias at night between January 13 and 14, thereby effectively preventing the taking of the city.

A group of local citizens gathered to demand the army return the weapons to the militias and let them liberate Apatzingán. Then, suddenly, a soldier opened fire and killed one militia fighter and three citizens, including a 11-year-old girl.

This is an alleged video of the moment when the soldiers open fire. It was published on the autodefensas’s social media support groups.

FATHER JAVIER CORTÉZ OCHOA, SPOKESPERSON, ARCHDIOCESE OF APATZINGAN (SUBTITLED TRANSL.): It was outside the city. Some citizens and a militia fighter died because of shots fired by the Mexican Army.

LEÓN: This is the voice of father Javier Cortéz Ochoa, spokesperson for the archdiocese of Apatzingán, speaking with us over the phone.

LEÓN: On Wednesday, January 15, one day after the army took control of the city, with thousands of troops patrolling the streets, a pharmacy was burned down by the Caballeros Templarios just two blocks away from the municipal palace.

This sparked criticism by many, like Father Gregorio Lopez, priest of Apatzingán, who for some days gave mass and worked wearing a bulletproof vest and who in an interview with a local newscast claimed that the criminal Templar Knights were fooling the soldiers, who didn’t knew who they where, or who, according to the priest, didn’t really try to go after them.

But we should look into our Governor Vallejo, who just happened to visit the city right around the time when the worst gangsters were having a meeting, probably even protected by governmental security from the 21st Military Zone, which, as we know, are in the Templarios’ payroll.

LEÓN: Father Cortéz described how the citizens felt after the army attacked the Militias, who have, in their eyes, been “liberating” the state from the terror of organized crime.

LEÓN: Despite the agreement, now there are doubts still lingering as to the capability and the willingness of the Mexican federal government to clean the state of organized crime, even more now in the lights of the recent attacks in Apatzingán while under federal protection, mainly because there is no trust in the honesty of the federal officials.

In the ground, it is evident, the distrust of the people on the federal government. This is a video of a group of Mexican citizens kicking the Mexican Army out of Buenavista, Michoacán.

Not only local critics, but also international journalists like Stephen Kurczy from The Christian Science Monitor have expressed doubts as to the motives why Michoacán Governor Fausto Vallejo descended with so many troops in Apatzingán just the day it was about to be seized by the autodefensas, a move long awaited by the citizenry, who now wonder why Vallejo civilians killed in the process of preventing the militias to take control over the city.

These are some militia commanders sending a message to President Peña Nieto on November 29th 2013.

“X”, ANONYMOUS MILITIA COMMANDER (SUBTITLED TRANSL.): It is very well known to you [Mr. President, Enrique Peña Nieto] the state of calamity and suffering we live in, because in due time we told you about it, when you came here during the presidential campaign. We know you know that in the past elections, Cervando Gomez, aka “La Tuta” [leader of the Templarios Cartel], made terrorist threats and ordered all of us to vote for the now governor [Fausto Vallejo], as well as the rest of you parties’ [PRI] local candidates. Because of that fact, we cannot trust in the municipal or state authorities.

We are hoping that what the Templar Knights recently said in a public statement is a lie. They said that there was a political agreement between the cartel and PRI’s [ruling party] national secretary, Humberto Moreira, to guarantee [Peña Nieto’s] victory and for the cartels to keep the privileges of impunity that they currently enjoy.

LEÓN: Now the Peña Nieto administration have to successfully crack down the local cartels before this conflict escalates. Any other action could be interpreted as an admission of complicity with the drug cartels.

In part two, we will review who are the autodefensas and how they originated.