The Real News joined activists and community leaders on a tour of the blast zone: areas of the city that would be most affected by a crude oil explosion

The Real News joined activists and community leaders on a tour of the blast zone: areas of the city that would be most affected by a crude oil explosion 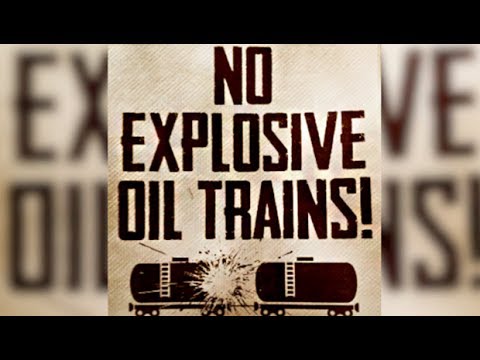 Jennifer Kunze: Today in Baltimore, we just completed a tour for elected officials and community leaders of part of the Baltimore blast zone, the areas of the city that could be impacted by a crude oil train explosion. Crude oil trains travel on freight lines across the city, and if a car hit one or if one was hit by a car, or if another type of incident caused a derailment to occur, a really catastrophic explosion could take place with the potential impact radius of a mile. In Baltimore, 165,000 people live within a mile of the freight train tracks. And so, this could really impact an incredible number of people in the city.

Charles Graham: I’m in a Baltimore-based human rights organization called United Workers. And more specifically, I’m a facilitator within the student-led committee based out of the local high school of Curtis Bay, Benjamin Franklin. For the past five years we fought the construction of what would’ve been the nation’s largest trash-burning incinerator less than a mile away from our high school and community.

One of the reasons that we fought against the incinerator was because Curtis Bay is already an area that is overburdened with a large number of toxic polluters and industries. While a lot of those industries being in the blast zone of the oil trains, this is just another example of Curtis Bay just, being dumped on in terms of a lot of Baltimore’s risk. So, we just see very immediate connections to not wanting this in our community.

Curtis Bay is fairly diverse. Wagner’s Point was primarily working-class European immigrants that worked at the factories around the time of the Second World War. And Fairfield was a primarily African-American working-class factory town. After the displacement during the late 90s, after Fairfield and Wagner’s Point were forced to leave that area because of all of the pollution that they were surrounded by, that bled out into the demographics of Curtis Bay.

More recently, there’s been a large influx of the Latino community in Curtis Bay, and as far as I know, it goes, maybe, somewhere in between the 30 percentile range of each respective racial demographic. One of the reasons why Fairfield was displaced, was because of a bunch of industry just coming into the community after already been cited for industry … If you go to the Fairfield Peninsula now, you wouldn’t be able to tell this, but before a lot of the industry came in, the community members would be able to tell stories of being able to go to their back yard and pick a pear off their tree if they got hungry, and, it actually feeling like a community, living on the countryside.

And a lot of the older community members are still feeling that history of just, having to be forced to leave their home because of profit being prioritized more than people’s lives. That was something that we struggled with immensely throughout the incinerator campaign, just working through that mindset of, “We’ve been a dumping ground for so many years,” and what does it mean to actually counteract that history.

Taylor Smith-Hams: We first started working on the crude oil train issue in Baltimore back in 2014 when there was a proposal by a Texas-based company called Targa to construct an additional oil train shipping terminal in Fairfield in South Baltimore. We did a lot of work to generate public comments and submit very detailed commentary regarding the air permits and pollution regarding that facility, and were ultimately able to influence the Maryland Department of the Environment’s decision, and they did not issue that permit for that facility. But during that process, we found out that crude oil trains were already traveling through the City to an existing terminal also in Fairfield.

So, since we found out about that, and after we had that win with stopping that additional terminal from being constructed, we worked in 2016 to introduce a bill in the City Council that would have required health impact assessments and risk assessments of the trains. And that was introduced in January 2016. It got stuck in committee for most of the year, and then ultimately, was killed and did not make it out of committee. So now, we are re-upping our efforts, and working closely with members of the City Council to introduce a new bill, hopefully, this year.

Ann Robinson: My concern is, Mount Winans is a very small community that is surrounded by the railroad tracks. And we do, on a daily basis, see these black oil trains traveling through our community. And if any one of them ever derailed, Mount Winans is actually, gone. Because the homes on South Packer Street, which is where I live, my front door is probably 30 yards, I guess, from the railroad tracks. And so, that really concerns me, that if anything would happen, that we wouldn’t have a chance.

I’ve been working with CCAN now, probably four years, maybe four years, and I’ve had them come out and speak to our community association, the residents of the community, on a few occasions. And I’ve attended some of their meetings. I’ve attended the City Hall meetings that they were at. And I did testify before the City Council.

Leah Kelly: In 2015, we submitted legal comments on an air pollution permit that would have allowed more crude oil to be shipped through Baltimore. The terminal could’ve shipped about 383 million gallons per year, which would be one 35-car train per day. That’s what it equals out to. In 2015, we submitted legal comments on that proposal. And we basically, just argued, in addition to the fact that there are already a lot of industrial sources in the Curtis Bay area and that the community deals with a lot of pollution from those sources, we also argued that the company did not properly calculate the air pollution from the terminal, and that it was improperly seeking what’s known as a Minor Source Pollution Permit rather than a Major Source Pollution Permit, which would require additional pollution controls and a number of different requirements.

Ultimately, the Maryland Department of the Environment agreed with us that there was not enough information in the permit application, and ultimately denied, has not, as of now, issued the permit.