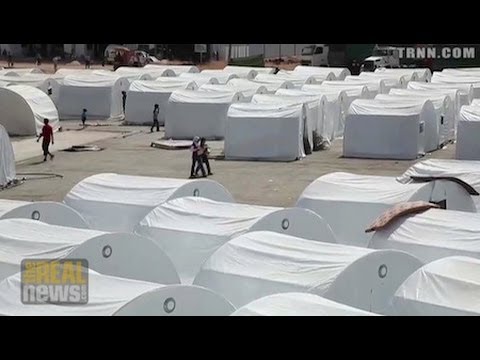 The humanitarian catastrophe in Syria is one of the greatest of recent decades, but we don’t hear very much about it on the news.

Now joining us to talk about the situation is Omar Dahi. He’s an assistant professor of economics at Hampshire College in Massachusetts. He’s an editor at The Middle East Report. And he’s of Syrian descent.

Thanks for joining us, Omar.

JAY: So we hear lots of, I should say, crying and talking about the need for democracy in Syria and the need for the downfall of Assad in Syria. The media’s, you know, had lots of this kind of information. But the real calamity is the humanitarian disaster in Syria, and we hear so little about it. First of all, give us a sense of the scale of things, and then why you think the media is more or less quiet about it.

DAHI: Well, the scale is really massive, and we won’t know an exact estimate of the disaster, the exact magnitude of the disaster until the fighting stops. But what is clear right now is that there is a setback of several decades in terms of human development, in terms of the destruction. In fact, a recent report by a group of Syrian economists shows that the human development index, which measures health, education, and income level, is at its 1993 level, meaning 20 years or perhaps more of a loss of economic development.

Of course, the most horrifying impact is the level of death and wounded and people who are permanently injured. The number of dead is estimated at more than 60,000, perhaps 70,000. We don’t know exactly.

There are over 3 million refugees and internally displaced people, people whose homes, whose sources of livelihood have been permanently destroyed. There are entire cities and towns and villages that are completely destroyed that need massive reconstruction.

Syrian society itself is fragmenting and splintering, and a level of polarization that really hasn’t been seen since Syria’s independence.

So really the level of destruction is quite staggering. And I think the reason we don’t hear as much about it is because, quite frankly, don’t care about the humanitarian catastrophe. They really have shown little care to the plight of the refugees. There’s very little funding compared to the needs of the refugees in Turkey, Lebanon, and Jordan, and particularly in Lebanon, which is a state that has very little resources of its own.

If you recall, the U.S. invasion of Iraq itself was a catastrophe, and one of the countries that paid for it was Syria, which received over 2 million Iraqi refugees, which is almost 10 percent of the Syrian population, over a period of a few years. Imagine the U.S. having a flood of 30 million people over a period of a couple of years. That would be the equivalent. So Syria in fact has paid the costs of U.S. and Western policy in the region, but now no one is really rallying to help the Syrians, who are suffering themselves.

JAY: Yeah. The only debate we hear about is how much military support to give. I mean, I’m not following everything, but I’m hearing next to no debate about how much humanitarian aid to give.

DAHI: Absolutely not. There’s very little of it. And I think it’s the responsibility of the states, in particular the U.S. and the European Union, that is constantly going back and forth about arming the opposition to step up to deal with the refugees to deal with the humanitarian catastrophe inside the refugee camps. I mean, as you probably know and your viewers know as well, the tragedy of many of these people who fled for their lives doesn’t end when they get there. In fact, these people may be victims several times over. They were victims initially over the past decade of the neoliberal policies that increased inequality and marginalization. They were victims of the violence unleashed by the regime. And now they’re being victims a third time by the neglect of their conditions after they fled.

DAHI: No, of course he doesn’t. But that’s been very clear from the very beginning that this is really a lunatic regime that is willing to do anything to stay in power, including destroy the country, which is what they have done. Even if their narrative that this is not an uprising, they’re simply armed gangs, even if that narrative is true, well, the response to this armed gang is to destroy the country, which is quite insane.

On the other hand, going back to the Western response, really in many ways it’s exacerbating the crisis, particularly due to the economic sanctions, the ones imposed by the U.S. which preceded the crisis, but mainly the ones proposed by the European Union, which was a blockade on oil exports of crude oil, which has really ground the economy to a halt and exacerbated the impact on particularly the lower classes, who are paying much higher prices of food staples, bread, heating oil, while really not doing anything at all to isolate and punish the regime. And here we see again the calls for economic sanctions, some of them well-meaning, others not, really backfiring and hurting the population that you allegedly want to help.

JAY: Well, is the strategy supposed to be actually deliberately that the conditions will get so terrible that everybody will rise up and overthrow Assad? I mean, is that what they think is the reason for having such sanctions?

DAHI: Well, that’s perhaps one reason that was mentioned, although it’s a quite depraved logic. But I think the declared goals was that they were only targeting the leadership, they were targeting the sources of funding for the military apparatus of the army, and so they will stop or basically impose a blockade on oil imports because that’s funding that directly accrues to the state.

Now, while that’s true, the people at the top, the army, has all sorts of ways in which they can continue to fund themselves. They’re regionally very well connected, and they’re able to continue like this for many years. But it’s the average people who really have no other source of income who are paying the costs.

Now, at the same time, we’ve seen Syria not suffering the worst aspects of the economic sanctions, because in many ways Syria had tried to be self-sufficient in terms of agriculture. The sanctions are not as tight as the sanctions that were applied in Iraq. I mean, there are still many sources of assistance, many of them informal assistance, lots of it coming from Syrians inside Syria and in the diaspora, reaching the rebel areas and other areas, as well as a variety of remittances that Syrians have always had.

But in many ways, you could say that the sanctions have clearly not achieved their goal of isolating and punishing the regime, and even though it’s hard to really disentangle the precise effects of the sanctions from the general disruption in the economy, it’s clear they’ve exacerbated the crisis, not helped it.

JAY: And how much support does Assad continue to get from Russia and then from Iran?

DAHI: It’s quite substantial, and I don’t think there are any precise figures. It’s really hard to say precisely what’s happening in Syria in general. The government figures are already quite vague, even before the crisis began, in many ways. But it’s substantial support, and it’s financial and military.

You see in declarations, really, in the past couple of months of Iranian regime claiming that it’s increasing its aid to the Syrian regime. One senior Iranian official said that Syria is province number 35 for Iran, so we’re treating this as an internal matter. So it’s very clear that Syria regime’s allies are really retrenched in their support of the Syrian regime, and that’s what’s allowing them to continue.

In addition to the fact that Syria had built up an impressive foreign exchange reserve before the uprising started, unlike many developing countries and many other countries around the world Syria’s debt-to-GDP ratio was almost nonexistent. In fact, they had a $20 billion surplus, which for a country with a GDP of $50 billion is quite impressive.

JAY: Alright. Thanks very much for joining us, Omar.

DAHI: Thanks for having me.