Geneva 2 May Lead to Federalism in Syria

Omar Dahi: Despite John Kerry's public statements, the U.S. is succeeding in its objectives in Syria, with the weakening of the Assad regime

Omar Dahi: Despite John Kerry's public statements, the U.S. is succeeding in its objectives in Syria, with the weakening of the Assad regime 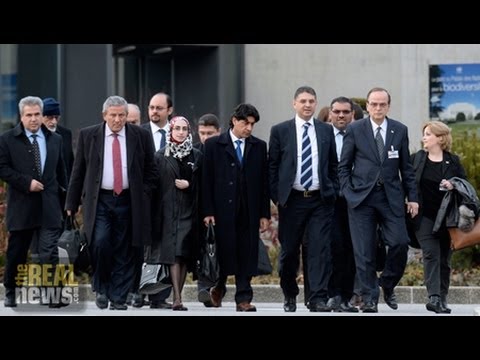 JAISAL NOOR, TRNN PRODUCER: This is The Real News, and I’m Jaisal Noor in Baltimore.

Violence and bloodshed continue to escalate in Syria. Over the weekend, the Assad government launched air raids and dropped bombs on residential neighborhoods of the city of Aleppo, killing over 150 people.

In other developments, the leadership of al-Qaeda has reportedly cut ties with an Islamic group called ISIL, the Islamic State of Iraq and the Levant. This comes after the conclusion of the Geneva II talks between the Syrian government and the opposition council, which wrapped up last week. Proposals remain open to reconvene on February 10.

Now joining us to discuss this is Omar Dahi. He’s an associate professor of economics at Hampshire College in Amherst, Massachusetts, visiting fellow at the Carnegie Middle East Center in Beirut.

NOOR: So, Omar, can we start off by getting just your reaction to the latest news? More than 150 people killed in violence this weekend in Aleppo alone.

DAHI: Sure. This thing was happening while the negotiations were ongoing in Geneva. It’s basically a continuation of the Syrian government’s strategy over the last six months to a year, which has evolved since the start of the full-blown civil war. And it increasingly means cutting supply routes, and laying siege to areas around Damascus and up through the coastal areas, and consolidating its control, and avoiding the direct battles that they used to have when there was more of a guerrilla warfare going on. And in those areas, it’s been succeeding in essentially starving the rebels and the civilians trapped in those areas into submission. And on the other hand, in the areas that are outside of its control: continuous air raids and bombings that devastate those regions and in many ways make them unlivable. So the latest rounds of violence are basically part of the strategy or an ongoing series of conflicts that are taking place preceding Geneva II.

And increasingly you see also, as you just mentioned, the fighting that is taking place between the rebel groups themselves, between Daish (or ISIL) and the other groups that include the Free Syrian Army, but also other al-Nusra and al-Qaeda type groups.

NOOR: And what do you make of the news that the leadership of al-Qaeda has cut ties with ISIL in Syria?

DAHI: Well, it basically reflects the fact that many of the rebel groups over the past several months have been realigning themselves. While there was more or less tacit alliance initially between al-Nusra, ISIL, and the other rebel groups, including at the very beginning the Free Syrian Army, you’ve seen, as ISIL has become more powerful, their desire to rid themselves of the competition and increasingly come to dominate both areas in northern Iraq or central Iraq and areas in northern Syria. And the latest news is basically an indication of the further realignments that are taking place.

And it’s kind of significant and compelling that al-Qaeda is itself considering ISIL too extreme, but it’s not necessarily indicative of any long-term political reorientation within the opposition or the rebel groups themselves. It’s more indicating a power struggle within some of these rebel groups whose outcome is yet to be determined.

NOOR: And what do you make of comments that Secretary of State John Kerry reportedly made in private remarks, saying that the U.S. approach to the Syrian Civil War is failing? Meanwhile, The New York Times quoted the UN mediator Lakhdar Brahimi as saying, “We haven’t made any progress to speak of.” “The gaps between the sides remain wide; there is no use pretending otherwise.” Those were his words.

On the other hand, the deal that followed the chemical weapons treaty was a strategic victory for U.S. and Israel in many ways. The fact that Syria gave up a strategic deterrence, a strategic asset–unilaterally, essentially–is an important victory, if you view it from a very realist U.S. perspective.

I think the U.S. in many ways has been very minimalist in its objectives, while at the same time providing humanitarian support–and, increasingly, evidence of, all along, military support, albeit on a limited basis. So in that sense, many of its objectives have been achieved.

Now, in terms of what’s happening right now, in terms of the negotiations, we see an agreement between Russia and the U.S. over the basic parameters of the solution. And it’s a complicated process to make these agreements bear fruit. But more or less you see increasingly the de facto territorial separation of Syria into areas of two–or three areas of control, actually, one that is by the regime, which stretches through Damascus and south of Damascus, through central Syria, up to the northwest and all of the coast. The opposition controls north of Aleppo and areas around the Euphrates. And then, in the northeast of Syria, there is a Kurdish-controlled which has declared autonomy. And I think the U.S. and Russia have basically agreed to engage in a process that allows these de facto splits to take hold.

Of course, there will be many attempts (as there are right now) by the regime to push for a total victory. I think the U.S. is trying to limit that. And perhaps the Geneva II process is the long road to establishing a sort of federalism in Syria, even though it may not be declared openly as federalism.

NOOR: Omar Dahi, thank you so much for joining us.

DAHI: Thank you for having me.

NOOR: So this wraps up part one of our discussion. In part two, which we’ll post at TheRealNews.com, we’ll talk about the ongoing refugee crisis in Syria, with millions and millions displaced, or external refugees, and what can be done about it.