Davey D: Occupy Oakland is built on the shoulders of decades of struggle

Davey D: Occupy Oakland is built on the shoulders of decades of struggle 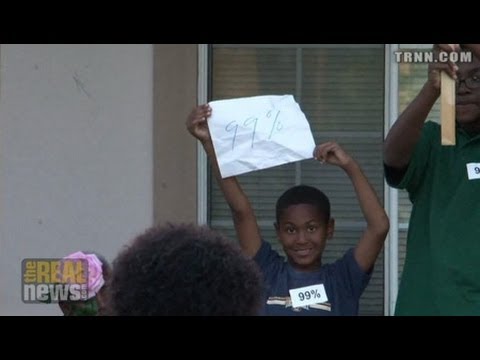 DAVID DOUGHERTY, TRNN: Oakland, California, was jolted by massive demonstrations on Wednesday, November 2, after the Occupy Oakland movement called for a general strike. The move that drew thousands and effectively shut down the Port of Oakland, one of the largest in the country, came just a week after Oakland police seriously wounded Iraq War veteran and demonstrator Scott Olsen, after he was shot in the head with a tear gas canister. Davey D is an Oakland journalist and host of Hard Knock Radio who has been involved in social justice advocacy for years. He spoke with The Real News regarding some of the origins of the occupy movement and the general strike in Oakland.

DAVEY D, JOURNALIST, HOST OF HARD KNOCK RADIO, OAKLAND: There’s two things going on: who’s actually camping out in front of city hall, and who are the 99 percent that support it. Many of the people down there that were organizers were people of color. That’s the first thing. The second thing that people are very clear about is that whatever Occupy is going on in Oakland stands on the shoulders of past efforts and movements. Oscar Grant movement, which crossed all types of racial lines, preceded the Occupy movement, where many of the same issues that are being addressed now were being addressed then–systemic unemployment, systemic police brutality, systemic economic disparity and tyranny. We saw communities of color facing record numbers of foreclosures, both in the black and brown communities in particular. These are things that were being addressed, and a lot of times they were ignored, even by people who, politically speaking and ideologically speaking, should have been in alignment with us. But the way that things work in this country, for better or for worse, we usually don’t get involved with movements or we don’t really start protesting until the problems are on our front steps. And so maybe a year ago, when people were talking about Oscar Grant and his execution by the BART police, and all the issues that were connected to that in the communities that came out protesting, you know, you didn’t have the groundswell that you may have with the Occupy movement, you didn’t necessarily see this covered on in some of the progressive journals. You didn’t see his trial being a front-and-center issue the way that Occupy is. And so, you know, for many communities of color, the Occupy movement, we looked at it like, well, you know, welcome to our world. We’ve been dealing with this. And, you know, maybe you need to fall in and pick up some expertise from the people who’ve already been fighting these fights and join in. And I think to a large degree Oakland was able to do that.

DOUGHERTY: The demonstration has drawn considerable national media attention for several incidents of property damage and violent confrontations with police, who arrested between 50 and 100 protestors. Banks and fast food chains became some of the targets of vandalism, and in the early morning hours of Thursday, police confronted demonstrators who had occupied a vacant building. Many demonstrators hold that the overwhelming majority of protestors were peaceful, and that some even worked to subdue the violent black bloc anarchists accused of promoting the escalation. But as the dust cleared on Thursday following a night of heated tensions between police and some of the demonstrators, both the city and the Occupy movement were left wondering how best to respond. For Davey D, much of the discussion of violence has overshadowed the magnitude and significance of the largely peaceful port closure and general strike, which he says developed out of several overlapping struggles.

DAVEY D: This happened in a week. It came in the aftermath of the unrest that took place last Tuesday, in which we saw this brutal police repression. And people came back and reoccupied the City Hall Plaza–Oscar Grant Plaza. And there was a general assembly with about 3,000 to 4,000 people, and folks said lets call for a general strike. I think part of the understanding was that there are some very tangible things that people could be and should be doing. There was a very tangible target: banks, forcing them to close; and two, the port of Oakland. If you shut them down, they lose $8 million a day, and it impacts not only cities and customers up and down the West Coast but all around the country. Each day that you shut it down, shipments get delayed a week. So that seemed to be a very natural and understandable type of goal. The other thing is that part of what you have going on is these relentless attacks on the unions from the 1 percent all around the country. And so when you talk about strike, you’re talking in the language of unions. There’s a very strong union presence in Oakland, and they were already dealing with issues at the port already. And so that was a natural alignment, so to speak. The third thing is that in Oakland, shutting down the port seven or eight years ago in April 2003, there was an antiwar march, and people went to shut down the port, and police shot people with rubber bullets, injuring several, and caused a big mayhem. And we really haven’t seen us shutting down the port since then. But out of that shooting came a number of lawsuits and edicts that the police had to agree to in terms of crowd control. We saw those tenets, so to speak, violated the week ago. And so people really wanted to push that envelope and go back to a place that they were shot upon by the police. So if you kind of line it up, it was the accumulation of all these incidents and more that really made this area fertile for the idea of a general strike, and its ultimate implementation was able to happen because of all these factors.

DOUGHERTY: Solidarity actions were held all over the country, as Occupy Oakland has galvanized the Occupy Wall Street movement following the police repression and subsequent popular mobilizations. While each city has its own unique experience and goals, all of the occupy movements are working towards creating a space to develop a project that challenges Wall Street and the standing economic order.

DAVEY D: I think every city has its challenges, every city has its history, and every city, when highlighted, symbolizes something special. If you’re down in Atlanta, that’s the cradle of the civil rights movement. How the Occupy Wall Street plays out there can only do so with that in the backdrop and that history intact. What it means in New York, where it first launched, there’s a history there. It’s in the belly of the beast. And so what happens in Oakland can be inspiring to what goes on in New York, can be inspiring to what goes on in Atlanta, and vice versa. And I think there are obvious similarities in terms of who we’re targeting, and there’s also similarities in terms of how those who we’re targeting are reacting and then trying to push back–you know, they use the police, they use a campaign of disinformation with corporate media.

DOUGHERTY: Occupy movements across the country face considerable challenges with both local governments and approaching winter weather. In Oakland, the city council expressed a desire to end the Occupation camp, and Mayor Jean Quan stated that the camp may need to move to a different location. This is David Dougherty with The Real News Network.