Removing the Social Security Tax Cap Would Benefit Most Workers 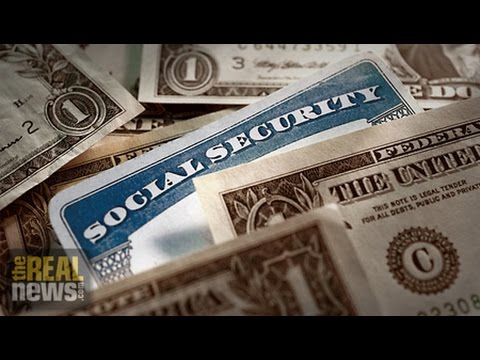 It’s a new year, and if you’re one of those early birds, you’ve started on your taxes. But did you know that if you earn more than $118,500 year, the government can’t tax those earnings under the Social Security tax, which is also known as the payroll tax cap? That means that someone who makes twice the cap this year pays the tax on only half of his or her wages. It’s a big issue, considering the future of Social Security is continuously being debated in Washington.

Our guest today is Nicole Woo. She is the director of domestic policy at the Center for Economic and Policy Research in Washington, D.C. Her new paper is titled Who Would Pay More If the Social Security Payroll Tax Cap Were Raised or Scrapped?

Thank you for joining us, Nicole.

WOO: Thank you for having me.

DESVARIEUX: So, Nicole, let’s start off with that question that you pose in your paper. Who would actually pay more if this tax cap were raised or scrapped?

WOO: Well, we looked at the numbers, and it comes out to the top 6 percent, six out of 100 Americans. So the people who are at the very top of the income scale are the only folks who would have to pay more if this payroll tax cap were raised or eliminated.

DESVARIEUX: And how high would that payroll tax cap have to be raised?

WOO: Well, there are different proposals out there. There are some proposals to eventually slowly phase the cap out entirely. And that would mean that the wealthiest people among us would pay the same rate as the rest of us, which seems kind of fair. If they were to do that, if Congress were to pass a bill like that, the Social Security shortfall that we’ve seen in the future would be reduced by about 70 to 80 percent.

There are some other bills in Congress that would raise the cap a little higher or a little higher, still shielding the highest incomes from the tax. So there are different proposals out there, but they all kind of look at the same thing, and that’s trying to get some more inequality in the rate that regular people pay versus the wealthy.

DESVARIEUX: But should we really be concerned about Social Security, since it’s solvent and currently has close to $3 trillion in its trust fund?

WOO: That’s right. Right now the Social Security trust fund does have a lot of money in it. And that’s because back in the ’80s Congress and the president back then decided that they saw the baby boomers coming. It wasn’t a surprise. And they decided to sort of pre-fund Social Security. So since 1983, workers, American workers, have been putting more into Social Security than has been coming out. It’s their money that’s in the trust fund.

What has happened since the ’80s is actually inequality has increased. So more and more of the wages in this country are above the payroll tax cap–they’re above what’s right now $118,500. That cap has been moving up with inflation every year. But as the income gaps have gotten wider, more and more of the wealthy’s income has been shielded, which is part of why the trust fund isn’t quite as big as we needed it to be.

DESVARIEUX: So, Nicole, are you saying that if we were to do away with this cap, then we wouldn’t run into that issue?

WOO: As I said earlier, one of the bills, some of the bills out there that were in the last Congress would slowly eliminate the cap entirely, and that would take care of 70 to 80 percent of the shortfall. There are some other bills that raise the cap, like, from 118,000 to 250,000 or to 400,000, and that would mean people would pay the payroll tax, but not on all of their income for the wealthiest, who would just capture some of the highest incomes. And, of course, those bills would take care of less of the shortfall. But certainly, as people talk about ways to shore up Social Security, this is one of the most effective ways to take care of it. And, again, it’s about fairness. It’s about making sure that all workers pay the same rate in their Social Security taxes.

DESVARIEUX: Nicole, can you just speak to specifically which lawmakers are supporting these types of proposals?

WOO: Well, we are in a new Congress now, but in the last Congress, Senator /pɑːrkɪn/, who has since retired, and Senator Begetch introduced some bills, as well as Senator Sanders. On the House side we had representative Gwen Moore, Linda Sánchez, Ted Deutch, Peter DeFazio, and some others I probably forgot, but all Democrats at this point. I don’t think there are any Republicans on those bills.

DESVARIEUX: Okay. So who do you see as being the largest opponents to these bills? And what’s really their interest?

WOO: Well, I’m not a mind reader, but from what they’re saying, there’s a split. A lot of Democrats are saying that Social Security needs to be expanded, that especially after the financial crisis we went through, where people’s home prices crashed, they lost their homes–a lot of people’s social security stayed, but their retirement accounts, their 401(k)s and IRAs crashed along with the stock market. That Social Security is even more important. And with the unemployment rates we’ve seen, more and more people don’t have savings as they’re going into retirement. So there are a number of Democrats who think we should reduce or eliminate the payroll cap, not only to shore up the fund, but also to perhaps expand it a bit and give people a little bit more security in retirement. And that’s pretty much the Democratic view.

DESVARIEUX: But, Nicole, what about Wall Street? Wasn’t there a push to reform Social Security by those on Wall Street?

WOO: You might–that’s a good question. Back in the Bush years, you might remember, there was a push to privatize Social Security, and that was taking money out of the trust fund, or future–or revenue that people would putting with their taxes would not go into the trust fund and instead would go to the stock market. And that was back in the mid 2000s. Could you imagine if that had happened and that Social Security money had been in the stock market right before the crash? We would have such a larger retirement crisis now than we already do. And certainly Wall Street would make a lot of fees if millions and millions of American workers’ retirement money that’s now in Social Security went into the stock market and other Wall Street vehicles. So certainly they are behind any sort of push to either privatize Social Security, move more money into the private industry, or to just sort of push out ideas and concepts about Social Security being in crisis, because if people believe there’s a crisis, then they’re going to say, oh, well, maybe we should go with the private market. But the fact is that Social Security is one of the best investments out there. The fees are very low because the trust fund is in U.S. Treasury bonds. They’re very safe. And the fees are not like what you would get in a 401(k). So, in many ways Wall Street and the financial industry have an interest in sort of scaring people about Social Security and eventually moving that money into the private sector.

DESVARIEUX: Alright. Nicole Woo, joining us from Washington, D.C., thank you so much for being with us.

Nicole Woo is the Director of Domestic Policy at the Center for Economic and Policy Research. She covers a broad range of U.S. economic policy areas including labor markets, financial reform, federal budgets, and social insurance.