A Soft Coup in Greece 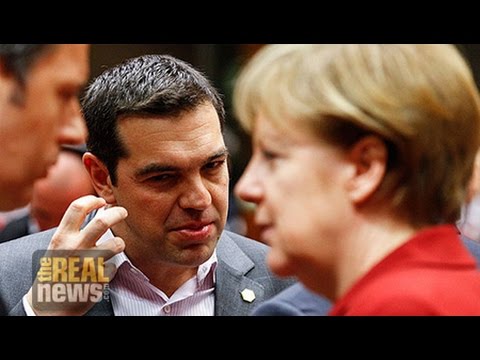 The deal struck between the Greek Prime Minister Tsipras and the leaders of the Eurozone has been called anything from an absolutely unavoidable compromise and the savior of the Eurozone to a surrender, or some people would call it a complete rout, on behalf of the Greek prime minister.

Now joining us to talk about this, joining us from Athens, is Nantina Vgontzas. She’s a PhD student at New York University focusing on political economy and social movements. She’s a member of the UAW Graduate Student Organizing Committee, organizing involved in a AKNY Greece Solidarity Movement. And she joins us, as I said, now from Athens.

NANTINA VGONTZAS, GRADUATE STUDENT, NYU: Thanks for having me.

JAY: So give us your basic overview of the deal. I know you’re not very happy about it. Why?

VGONTZAS: Well, I think it’s first important to note that the conditions under which this deal were made can be characterized as those of a soft coup. For five months the European Union, the European Central Bank were imposing a kind of liquidity asphyxiation on the Greek government as it was trying to negotiate in good faith. And revelations from senior members of the government including the former finance minister Yanis Varoufakis show that the creditors weren’t really interested in negotiating in good faith.

So you know, the past two weeks but especially the past few days were kind of an intensification of both that economic pressure, but also the political pressure that the Eurozone leaders were placing on the Greek government. Making threats that they were going to kick it out of the Eurozone, which is something that the government was one, not committed to and also not prepared to doing.

And then the second point is that I would say that this was a capitulation to the coup. Leaders make their choices when they’re faced with these very intense pressures, and then they took his gun and tried to fight off the forces of Pinochet in ’73, yet that was a coup d’etat, of course. In this more kind of soft coup we can say what was taken wasn’t the government, but as Varoufakis said, was public property and a sense of sovereignty of the Greek government.

Tsipras didn’t lead. He took the agreement. And reports again from Varoufakis show that even people like Varoufakis were willing after the resounding no result of the referendum to take it in a different direction, to consider defaulting within the Eurozone or even leaving the Eurozone. Tsipras at that point said no. and so the rest of the week, which is this past week, was living out that kind of surrender.

JAY: What do you make of the argument that the balance of forces simply were, Greece couldn’t resist this. That Greece just can’t deal with the pressure that European finance could put on it, and that the referendum was I guess you could say kind of a bluff, in a sense. That they thought this victory in the referendum would give them leverage. And then the Germans essentially called their bluff and he really didn’t have any choice.

VGONTZAS: Yeah. I think unfortunately it was a bit too late in the game to try to pull this kind of tactic and then not be ready to take it all the way. I agree that the balance of forces in Europe weren’t conducive to the kind of redistributive or lighter austerity that Tsipras and Varoufakis and their faction in the leadership were aiming for when they originally entered power. But in that case the government at least needed to be prepared for a different kind of more confrontational scenario, a plan B, as they call it.

And Varoufakis said that they had considered that as a contingency measure. But they felt that they didn’t have the mandate of the people at that point to really fully flesh that out from something that was being devised by a secret five-person group into an operation that could be implemented by 500 people.

JAY: So do you think that the opposition to this is so widespread in the Greek working class that a call for a general strike could really catch on?

VGONTZAS: Well, I do think objectively one of the concerns is that because the economy has faced such a tumultuous period in the past few months, but especially the past few weeks, where workers have been asked by some of their bosses to take mandatory leaves of absence. People aren’t organized to the level where we’ll have sufficient participation in this kind of strike.

But of course, I think this spans beyond the typical kind of strike. And there’s a massive amount of disappointment, and we don’t know whether people will, on their own, show up as they did last Friday. Or even, you know, I want to highlight another moment that took me personally by surprise was when the New Democracy government shut down the public broadcasting company in June 2013. And it was a time of demobilization, disenchantment, and I didn’t expect that many people to show up to the headquarters of public broadcasting, but we got tens of thousands of people who came on their own. So I think we might be seeing that.

JAY: One of the demands, I thought, of these recent negotiations was to close the public broadcaster down again. I haven’t seen any reference to that, have you?

VGONTZAS: Yeah. Well, it hasn’t been directly stated in that way, but yes. One of the demands is to have a rollback, essentially, of the legislation that was passed since February 20, that the creditors deem unilateral on the government’s part. And one of those measures was the reinstatement of the public broadcasting ERT workers.

Also, another measure was the reinstatement of the finance ministry cleaning workers, which was another important struggle in the Greek crisis, especially in the period of demobilization. Again, I think that’s adding humiliation, adding injury or insult to injury.

But again, you know, even if people don’t show up in large swathes on Wednesday, which again I think is debatable how it’s actually going to end up playing out, I think that it’s going to be difficult for the government to implement those measures. So on the one hand the creditors did have a point when they said that they weren’t too sure whether the government could implement those demands.

There’s also question whether the government is really willing to implement these measures. There could be snap elections called. It’s a very tumultuous time in Greek politics. The situation is very fluid. I think we can see a wide array of responses at this point.

VGONTZAS: Yeah. I’ve heard many things at this point, and again I think they themselves don’t know what’s going to end up happening to their posts and their positions in the next couple of days and weeks. I think people are regrouping, they’re figuring out how they can resist this kind of capitulation. We don’t know if people will even break off from the party, if they will try to regroup with other forces of the left.

I think there’s a lot that could happen. I’m hopeful of what could happen given the independence of some forces on the left and the jolt that the referendum week gave to those forces. And you have the continued support of the public in this anti-austerity effort that didn’t start with and probably won’t end with Syriza.

JAY: Right. All right, thanks very much, Nantina. Please join us for part two. Nantina and I are going to carry on our discussion. And if you’re on the Real News website you’ll see it right below, here. Below the part one.

VGONTZAS: Thanks for having me.

Greece Exits its Bailout but Remains Shackled by Debt and Austerity