US nurses rising up

Nurses around the United States are standing up for themselves and their patients, both through local labor disputes and the strengthening of a new national union. The Real News looks into the new union, a labor victory in Philadelphia, and a looming strike in Washington, DC.

Nurses around the United States are standing up for themselves and their patients, both through local labor disputes and the strengthening of a new national union. The Real News looks into the new union, a labor victory in Philadelphia, and a looming strike in Washington, DC. 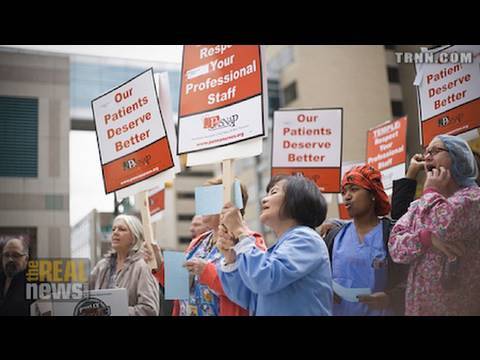 JESSE FREESTON, PRODUCER, TRNN: On Wednesday, more than 1,000 registered nurses from across the United States rallied on Capitol Hill in Washington, DC. They are demanding legislation enforcing maximum nurse-to-patient ratios and workplace safety standards, along with their persistent support for universal single-payer health care. But they also came to show the fruits of their recent organizing efforts.

EFREN GARZA, NURSE & UNION REP. (OAKLAND, CA): We are nurses that created a National Nurses United union, which was about six months or so ago in Phoenix, Arizona.

FREESTON: They already count more than 150,000 members nationally. As the country comes out of a long national health-care reform debate, many of the founding nurses lamented how their voice was often excluded or treated as a distant second to doctors as experts on the medical system.

PATRICIA EAKIN, NURSE AND UNION PRES. (PHILADELPHIA, PA): Doctors are very important in health care. There’s no denying that. But in terms of who monitors the patient, who makes sure the patient gets well, who is working closely with the patient and doing all the treatments and activities to make them get well—.

GARZA: That’s why we call ourselves patient advocates. It’s really important to get the firsthand bird’s eye view of the individual that’s caring for the patient.

EAKIN: We’re with the patient 24/7. The doctors come in and out for a few minutes.

GARZA: Members of the national unions say they’ve taken a lot of energy from the recent strike at the Temple University Hospital in Philadelphia. Patricia Eakin is the president of Pennsylvania’s nurses union and a staff nurse in the emergency room at Temple.

EAKIN: The hospital administration was very intent on breaking up the union. They wanted to—they had this thing called a gag clause, a nondisparagement clause, where they wanted to take away our right to advocate for our patients. For example, here I am in Washington, and I’m going to be talking about why we need nurse-to-patient ratios, and I have to do it by, in some respects, referencing where I work and Temple’s inadequate patient ratios to talk about what we need. If they’d been able to keep me from doing that, it would be very hard for me to lobby or advocate for patients in any arena. Their contract proposals were very, very overreaching. They had huge economic concessions they were asking for.

FREESTON: A key issue for both the Philadelphia nurses and the national union is safe nurse-to-patient staffing ratios.

EAKIN: But they outright refuse to talk about staffing—we don’t have to talk about it, we’re not going to, and we don’t care. So all those things added up to us deciding that we needed to go on strike.

FREESTON: The strike lasted 28 days before the Temple management agreed to almost all the nurses’ demands.

EAKIN: We prevailed. We worked really hard to keep our unity. We had great picket lines. People came to picket duty, they talked to each other, they understood the issues, they were very angry at Temple, and they were ready to stay out as long as it took. Finally the public and the politicians said, you know, enough’s enough; get back to the table and settle. So they came back, and we settled, and we’re extremely happy with the deal we have.

GARZA: Every time that we have a personal victory, we are just that much closer to sending out the message to the rest of the nursing professionals throughout this country that united we can do a great deal of work.

EAKIN: So here I am in Washington, lobbying, and ready to fight them some more.

FREESTON: As it stands, California is the only state with laws enforcing safe patient-to-nurse ratios. And a recent study from the University of Pennsylvania isolated that policy as having significantly lowered the number of deaths in California hospitals. Writing for CNN, oncology nurse and author Theresa Brown summed up the study’s findings, writing, quote, "The thinner nurses are spread in hospitals the greater the number of patients who die. It’s that simple." National Nurses United member Joan Verret described the toll this can play on nurses themselves during testimony at a recent hearing in Florida.

JOAN VERRET, REGISTERED NURSE (LAKELAND, FL): What you hear from are the nurses who leave the field because their heart is breaking when they lost a patient because they were two doors down taking care of someone when another patient coded and died.

GARZA: Ratios need to be implemented as a national level [sic]. Right now, a nurse can be—anywhere in this country other than the state of California, could have a patient ratio of 1 to 12, 1 to 18 patients.

FREESTON: While National Nurses United built pressure at the national level, individually unions are demanding ratios be implemented at a hospital-by-hospital level as well. This includes Nurses United D.C., who held an informational picket in the rain outside the Washington Hospital Center on Tuesday evening.

MEGAN HONOR CAINE, NURSE & UNION STEWARD (WASH., DC.): We are on our second extension. So we’re going past the original expiration of the contract.

MARTINA HALL, NURSE & UNION STEWARD (WASH., DC.): We didn’t ask for any wage increases whatsoever. We wanted to maintain where we were and get more bodies to take care of patients.

CAINE: The workplace should be a good workplace, the jobs should be quality jobs, so they can attract new nurses and retain the nurses that they have. In the proposals that they have given us, they dramatically reduce our wages and they really change our health insurance and our pension and our benefits.

FREESTON: The hospital says the nurses need to come down to the industry averages for compensation. The union says those averages are selective and don’t account for the high cost of living in DC.

CAINE: They say over and over again that they are financially stable, that they’re financially healthy, and they just are trying to choose not to pay us what they have in the past.

FREESTON: Some nurses had suggested the hospital is trying to break the union. They point to the recent firing of 18 nurses, fired for missing shifts during the record snowstorm in early February that shut down the entire city. The hospital denies the firings are related to the contract negotiations. Hospital President Harry Rider said they were fired because they, quote, "did not show the same commitment as most of their co-workers to the community, our patients, and their fellow associates." The union says that there were over 1,750 absences at the hospital during the snowstorm, and only 21 of those were fired, 18 of which were nurses. Since then, the union has negotiated the reinstatement of nine of the nurses. One of the nine still out of work is Geri Lee, who spoke to DC.’s local NBC News affiliate.

GERI LEE, FIRED NURSE, UNION LEADER: I am an executive [inaudible] union, I am a shop steward, and I have instituted some major changes in my division. And maybe they’re not happy with that.

FREESTON: While not affiliated with National Nurses United, the DC nurses we spoke to were supportive of the drive toward national unity among nurses, especially given recent signs of unity amongst their employers.

FREESTON: Nurses in DC and Philadelphia said that the amount the hospitals are willing to spend on replacement workers shows their determination to break the union.

EAKIN: We figured that a cost for our 1,500 employees of the union would be about under $3 million a week for full payroll, and we figured they spent about $7 million extra on the replacement workers in the first week, flying them in from all around the country, putting them up in luxury hotels, paying them up to $10,000 a week, $2,000 a week bonuses. So for them it wasn’t about money at all—they had a lot of money, and they wasted a lot of money on replacement workers hoping that we would collapse and come back to work under their contract proposals.

FREESTON: Another reason Eakin and others came to Washington was to demand new national workplace safety standards.

EAKIN: I’ve been a registered nurse for 34 years now, and I’ve worked on [inaudible] where I’ve had to lift very heavy patients. And I have chronic back problems. I’m lucky enough that I’m not permanently disabled, but I suffer a lot of pain.

FREESTON: According to the Bureau of Labor Statistics, in 2008, more than 36,000 health care workers reported injuring their backs while moving patients.

GARZA: We have nurses that have been injured in their careers, after perhaps as short as ten years being in the profession, and aren’t able to lift any more than 40 pounds. As a result, many hospitals just lay you off, and the profession that you feel that you’ve been called to, that you love, is suddenly and abruptly ended.

SEN. AL FRANKEN (D-MN): We will not stand for unsafe workplaces. No nurse should have to sacrifice his or her own health to care for others. Let your senators and representatives know how important a safe workplace is to you, and remind them that sooner or later you’ll be taking care of them, and you’ll remember how they voted. Scare them a little is what I’m saying, okay, aside from just threatening them. Share your stories and those of your colleagues.

FREESTON: If the recent strike victory in Philadelphia is any indication, nurses appear ready to get what they’re after.

What Is Behind Mayor Pete’s Corporate Pivot on Medicare?