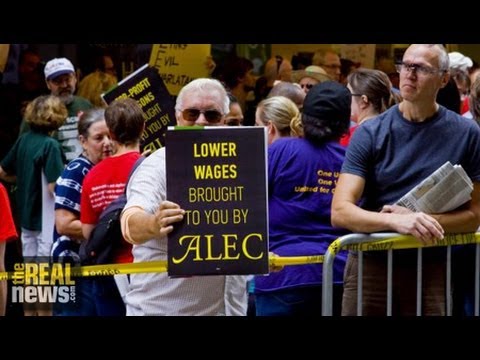 Corporate-funded American Legislative Exchange Council, or what it is more commonly known as, ALEC, is holding a conference celebrating its 40th anniversary through December 6. But the guest list may be running a little thin this year, as ALEC is losing some corporate friends. But it’s also gaining some new ones, like Google. Google has been funding right-wing groups like Heritage Action and ALEC, which is known for drafting some draconian laws in education and right-to-work policies which undermine collective bargaining.

Now joining us to discuss how Google is cozying up to the right is Nick Surgey. He is the director of research at the investigative reporting group the Center for Media and Democracy.

Thanks so much for joining us, Nick.

NICK SURGEY, DIRECTOR OF RESEARCH, CENTER FOR MEDIA AND DEMOCRACY: Thanks, Jessica.

DESVARIEUX: So, Nick, I’m sure people are hearing this story and saying, isn’t this just business as usual, corporations cozying up with ALEC? Or is this really more of a political statement, having Google supporting groups like ALEC?

SURGEY: Yeah, and I think for almost any other corporation that would probably be true. A lot of corporations fund both sides, and they’re unembarrassed about that. But, you know, Google has for many, many years, really since its conception, held itself up to be a different sort of Corporation. They spend a lot of time and effort and cash trying to project this progressive image. You know, they talk about the fact that they don’t do evil, and over their history they’ve funded a lot of progressive groups, a lot of progressive causes. They’re investing more than $1 billion in renewable projects–they like to tell the world about that–renewable energy projects.

So it’s very surprising that they are funding these groups on the right. And it is something that’s new. It seems to have happened about 18 months ago. They hired a former two-term Republican member of the House from New York, who was seen as a pretty liberal Republican in New York, but it was New York. And she was hired–and The Times, The New York Times at the time said that she was hired to lavish money from Google on selected Republicans. And that seems to be what has happened. But those selected Republicans turned out to have been some of the most extreme elements of the right wing of the Republican Party.

DESVARIEUX: And why this shift? I know you mentioned this is something new. But what sort of legislation would Google be interested in backing?

SURGEY: Well, you know, I mean, that’s difficult to tell. Google is transparent voluntarily. They do announce to the world the groups that they’re funding. And so in that sense, you know, that’s honorable. But they don’t announce how much money they’re giving and they don’t tell people why they’re funding these groups. And some of these groups certainly do have sort of tech freedom issues that they may be interested in.

ALEC for much of its 40-year history has worked to advance legislation that rolls back environmental protections, and there’s a number of bills that are on the agenda at the conference that you mentioned that’s happening just a few blocks away from me here in Washington, D.C. There’s a couple of bills that roll back the ability of the EPA to both regulate greenhouse gas emissions, and also to regulate fossil fuel power stations. There are some new antiunion bills.

And there’s a bill that’s goes after country-of-origin labeling, so when American consumers know where their products come from, they’re able to make an informed decision. And this is very much seen as a threat to particularly the Canadian pork industry, and they’ve been pushing back quite significantly, and this bill has popped up on the agenda at ALEC. You know. I mean, it’s entirely against the interests of American consumers. Americans want to know where their products are from. And when they do, they tend to buy American. And ALEC is actually pushing legislation or deciding on whether they should push this legislation tomorrow. They’re going to take a vote on it. That is against the interests of what most consumers want.

DESVARIEUX: Okay, Nick. I’m going to bring up the other side. Isn’t this just a expression of free speech? Why shouldn’t Google have the right to put their money where they want to?

SURGEY: Well, Google does, of course, and that’s fine. But for an organization, for a corporation that’s worked so hard to promote this progressive image–. You know. And I know people that work for Google, and, you know, they’re very progressive, and they believe strongly that they work for an organization that really does respect the values that they talk about, that they don’t do evil, that they–you know, $1 billion invested in renewable projects is not just a symbolic investment. That’s a huge amount of money. And so it’s almost unthinkable, I think, a year and a half ago that Google would be spending money on groups like Heritage Action, who are really one of the most extreme groups operating in national Republican politics. They whole sway over so many elected officials and really were driving the agenda to try and shut the government down and keep it shut down in order to try and get a full repeal of the Affordable Care Act. And that angered a lot of Republicans. And Google has helped fund that effort by providing resources to Heritage Action.

SURGEY: It does, yeah, it does, and it has done for very many years, you know, and it appears to be continuing to do that. So what’s new is that now Google is funding both sides. It’s going to be difficult for them to continue to say that they are truly a progressive Corporation at heart when they’re doing now the same as every other corporation does, which is that they fund everyone because they want to try and influence legislation that benefits their bottom line. And that’s regrettable.

DESVARIEUX: Alright. Nick Surgey, thank you so much for joining us.

Nick Surgey is Senior Fellow at the Center for Media and Democracy. He work has been featured in the New York Times, Los Angeles Times, Washington Post, and The Guardian.  His research has also been cited in Mother Jones magazine, The Nation magazine, on MSNBC, and many other places including the Colbert Report on Comedy…