Norman Solomon, co-founder of RootsAction.org, says Jeffrey Sterling and other whistleblowers have leaked classified information against the interests of the ruling elite, but in the interest of democracy

Norman Solomon, co-founder of RootsAction.org, says Jeffrey Sterling and other whistleblowers have leaked classified information against the interests of the ruling elite, but in the interest of democracy 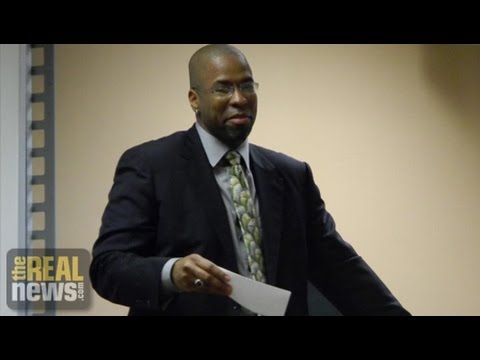 Former CIA officer Jeffrey Sterling, accused of telling New York Times reporter James Risen about a CIA operation that had provided flawed nuclear weapon blueprint to Iran in 2000, is now going to trial next week. Now a petition of support for Jeffrey Sterling is underway, titled “Blowing the Whistle on Government Recklessness Is Not a Crime”. It has gained more than 30,000 signatures in recent weeks, urging the government to drop all charges against Sterling.

Now joining us from New York, New York, is a sponsoring member of the campaign, Norman Solomon. Norman is a founding director of the Institute for Public Accuracy, cofounder of the national group RootsAction.org, and journalist for Expose Facts.org.

Thank you so much for joining us, Norman.

PERIES: So, Norman, tell us what Sterling is accused of and why it’s such an important case to you to mount such a campaign in support of him.

SOLOMON: Well, the accusation against Jeffrey Sterling as a former CIA officer is largely under the Espionage Act, which is a misuse of that 1917 law. And the charge is that he provided documents and information that has been called classified by the CIA to New York Times reporter James Risen for a book he wrote that was published in the year 2006 called State of War. And it was about a flawed plan, really, implemented by the CIA for negatively constructed or falsely constructed diagrams to the Iranian government for a nuclear weapon. So it was a botched plan. It was both dumb and dangerous. And the CIA and the Justice Department are now pursuing the prosecution of him. He could face many years in prison.

PERIES: Now, you have mounted a campaign saying whistleblowers are, you know, in the interest of–public interest should not fear this, basically. Now, when one joins–I guess what’s in everyone’s mind is, when one joins the CIA, one is sworn to secrecy and for protecting national secrets. So when does a employee sort of cross the line and start defending public interest instead of interest of the department?

SOLOMON: Well, if you’re an employee of the CIA or the NSA or the Pentagon or State Department, you take an oath to preserve, protect, and defend the Constitution of the United States, and that is your first loyalty, or should be. And as in the case of Daniel Ellsberg with the Pentagon Papers, Chelsea Manning with her revelations, as well as many other whistleblowers, including Edward Snowden, it’s important to recognize that the higher loyalty is to truth and to the Constitution and to the informed consent of the governed. It’s really not possible to have meaningful democracy if the public, the people don’t know what is being done in their names with their tax dollars.

In this case it was highly dangerous what the CIA did. And I should emphasize that Jeffrey Sterling, as the defendant, is not acknowledging that any of the accusations in the indictment are true. He is not in any way stating that he was a source for James Risen for this chapter in his book that provided classified information. But no one disputes–and that includes Mr. Sterling–no one disputes that he went to the Senate Intelligence Committee staff and provided them with information about this operation by the CIA, and now 15 years old. And that alone, and significantly, makes him a whistleblower.

He went through channels. And part of the very vicious activity of the U.S. government in oppressing whistleblowers, and in fact freedom of the press, is that despite what we hear about how people should go through channels and can go through channels meaningfully, when people do that who work at agencies like the NSA and CIA, they are snared and trapped, and then later pursued, and in some cases, as in this one, prosecuted. So he is a whistleblower, no matter whether the indictment is true or false, and Jeffrey Sterling should be defended as such.

As you mentioned, there is a petition urging the Justice Department to drop all charges against Jeffrey Sterling launched by RootsAction.org, many supporting organizations, and people are very much invited to sign and circulate that petition.

PERIES: Now, one of the things that the public is quite unaware of is the kind of pressure somebody like Jeffrey Sterling is under. Could you describe sort of what’s going on in his case and the pressure he might be feeling at this time?

SOLOMON: It’s a key point, because the prosecution has as its target not only Jeffrey Sterling, but any would-be whistleblower in the CIA and other such agencies. It has to be extremely difficult for anyone–and Mr. Sterling is in his mid-late 40s now–anyone to look at the prospect of decades in prison accused of doing something that, according to the government and quite a large proportion of the media, is against the interests of the United States.

PERIES: So we know what happens to people under this kind of pressure. Aaron Swartz, for example, ends up committing suicide, Edward Snowden is exiled in Russia, and Chelsea Manning went through a horrid public trial of his personal life. And Jeffrey Sterling is likely up for that kind of scrutiny as well.

Now the campaign you have mounted, obviously, is gaining momentum. What do you expect will be its passage?

SOLOMON: Well, I think that the momentum is going to escalate in the next couple of weeks. At ExposeFacts.org, we’re providing extraordinary, I think, daily coverage, beginning January 12, of the trial, which is expected to run two or three weeks. So everybody’s invited to go for that coverage at ExposeFacts.org.

The petition also is continuing to gain traction. There are a lot of groups that have gotten behind it. And I think it strikes a very important chord for freedom of the press, for the flow of information in a democratic society, and also on the issue of selective prosecution. This is key, because as a matter of routine, high government officials in the White House, State Department, Pentagon, CIA, NSA, and other agencies are leaking classified information to the news media. We might call them authorized leaks. But the people who perpetrate and authorize those leaks are not prosecuted at all. Often there are not even crime reports filed by the CIA when there’s a leak of CIA information, which is not surprising since the press office of the CIA is often leaking the classified information itself. So one would not expect the CIA to file a crimes report against its own top officials or against its press office.

People should, I think, be aware that the recent report by the Senate Intelligence Committee on torture documents that in fact it was a calculated process implemented by the CIA press office to leak classified information to make the interrogation and rendition program of the CIA look good in the press.

So this is a fundamental issue, and the campaign to support Jeffrey Sterling will be stressing this point, that it is illegitimate to prosecute someone for leaking classified information at the same time that top officials of the same agency are doing the very same thing.

PERIES: It’s going to be a interesting case. And, Norman, I hope you join us in following it at The Real News.

SOLOMON: I’ll be very glad to. Thank you.

Norman Solomon is the co-founder and National Coordinator of RootsAction.org, and a coordinator of the Bernie Delegates Network.