Nicolai Petro: The eastern part of the country feels like it does not have a voice in politics, and secession is only last resort for most of the protesters

Nicolai Petro: The eastern part of the country feels like it does not have a voice in politics, and secession is only last resort for most of the protesters 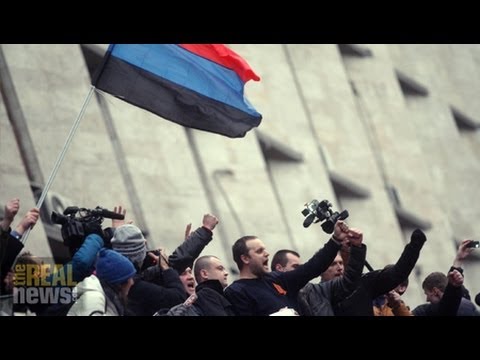 Tension is rising between the U.S. and Russia after pro-Russian protesters occupied government buildings throughout several cities in Eastern Ukraine. Protester in Luhansk have called for a referendum vote on whether or not to join Russia. Both Russian and U.S. officials have accused each other of creating the crisis.

Here’s what Secretary of State John Kerry had to say.

JOHN KERRY, U.S. SECRETARY OF STATE: It is clear that Russian special forces and agents have been the catalysts behind the chaos in the last 24 hours.

DESVARIEUX: On the other side, the Russian foreign ministry has also claimed that U.S. mercenaries and right-wing groups are working with Ukrainian security forces in the East to quell the protests.

Now joining us to discuss this situation is Nicolai Petro. Nicolai is a professor of politics at the University of Rhode Island. He’s been in Ukraine since August as a visiting scholar and has observed the current crisis firsthand.

Thanks for joining us, Nicolai.

DESVARIEUX: So, Nicolai, we just heard from Secretary of State John Kerry, and you also–as I mentioned, the Russian side is pointing the finger at the U.S., so there’s back-and-forth between both sides. But in the end of it what I want to know is: where’s the truth? Who are these protesters? And who is supporting them?

PETRO: I don’t think it’s fair, quite fair to characterize them as secessionists, because secession is really a last resort for them. Their demands are for a transfer of more power to the regions, and only if the government in Kiev refuses that, if they want to hold a referendum for independence, and then ultimately, perhaps, joining Russia. But that’s not their first objective.

DESVARIEUX: How much popular support is there for these building occupations and the calls for referendums?

PETRO: That’s very hard to say. There have been recent polls that suggest that it is not a popular option. In other words, the majority would vote against both federalism and certainly against separation. But that only–as the mayor of one of the cities has said, that only makes it all the more surprising that Kiev doesn’t want to hold a referendum and put the issue to rest.

DESVARIEUX: Do you think Russia is likely to annex these parts of Eastern Ukraine?

PETRO: I don’t see that as a serious possibility, no, not at this point.

DESVARIEUX: And why is that?

PETRO: Well, for example, I don’t really understand where these troops that the United States and NATO are arguing pose a problem–there seems to be conflicting reports about them. The Guardian and NBC News reports have said there are no particular troop amassments in the area. Russia, of course, claims that there’s nothing unusual happening. So there doesn’t really seem to be any special preparation. And it would take even more–much more extensive military preparation, even, than took place in Crimea.

DESVARIEUX: And tensions are really high there in Ukraine. What would be your proposal to de-escalate the tensions between the pro-Russia and pro-Kiev factions?

PETRO: Well, I do think, for example, that the government in Kiev, instead of just outright rejecting the idea of local referendums, could actually get ahead of the issue by embracing it and framing it in terms that it would like to see. It seems to me the main complaint of people in the East is that they’re not having a voice now in politics. Their political party, which was the Party of Regions, is in disarray. It doesn’t look like any of the candidates that traditionally have been strong in the East are likely to even make the final round of the runoff round of the presidential elections. And that would make the presidential elections–it would give them a result that would basically not be considered fair in the East, and possibly the South.

DESVARIEUX: What do you make of the argument to federalize?

PETRO: Well, I think it’s worth considering, particularly because federalism does not propose any specific formula. If a country is divided–or let’s say not divided so much, but has populations that have very different customs and, in this case, even languages and religions, federalism is a way to keep the country together under a single political entity. But the difference between what Kiev is proposing, which is greater regional autonomy but not federalism, and what the protesters are calling for–specifically, federalism–is that regional autonomy in the case of federalism is then something negotiated between the center and the regions, and presumably also enshrined in the Constitution. They’re very skeptical–as I understand the claims of the East, the arguments there as to why it has to be federalism, not just local autonomy, they’re very skeptical of just being granted local autonomy, because that’s been taken away in the past, and they really want to see that guarantee enshrined in the Constitution.

DESVARIEUX: But aren’t the Russians themselves advocating for a federalization? And you have the Ukrainian government basically coming out saying that essentially this will just play into the hands of the Russian elite.

PETRO: Federalism, as I feel, is appropriate for countries with vastly differing populations. It’s not appropriate for every country. But it may be appropriate in the case of Ukraine, because we keep seeing divisions in orientation, cultural orientations, assumptions, language, religion, between East and West. The concept of a unitary state really has run into some very serious problems as these very issues that we’re seeing today suggest.

DESVARIEUX: Alright. Nicolai Petro, thank you so much for joining us.

Nicolai N. Petro is the Silvia-Chandley Professor of Peace Studies and Nonviolence at the University of Rhode Island. He is currently joining us from Odessa, Ukraine. He served as special assistant for policy toward the Soviet Union in the U.S. Department of State from 1989 to 1990. He has received many fellowships, including two Fulbright…