Professor Nicolai Petro lays out how the Crimea crisis could be resolved, as tension remains between pro-EU groups and Russian supported factions

Professor Nicolai Petro lays out how the Crimea crisis could be resolved, as tension remains between pro-EU groups and Russian supported factions 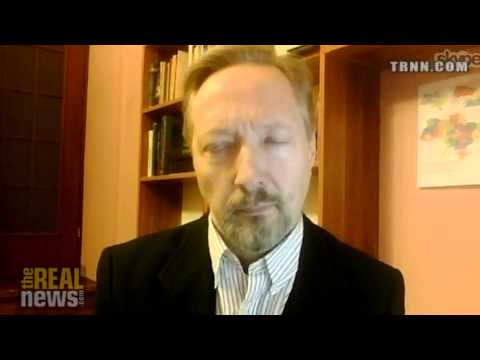 Following the Russian takeover of the Crimean Peninsula in Ukraine, Western and Russian diplomats are meeting in Paris to discuss how to resolve the political crisis in Ukraine. The European Union has also offered a $15 billion aid package to Ukraine on the condition that it reaches a deal with the International Monetary Fund over austerity measures and domestic gas subsidies.

Now joining us to discuss all this is Nicolai Petro. Nicolai is a professor of politics at the University of Rhode Island, and he has been in Ukraine since July as a visiting scholar and has observed the current crisis firsthand.

Thank you for joining us, Nicolai.

DESVARIEUX: So, Nicolai, I want to first start off with getting a sense of Putin’s approach and the reasons for why he decided to move with such urgency to intervene in the Crimea. Can you just assess how much danger there really was to Russians in Ukraine, as Putin had claimed?

PETRO: I don’t think there is a threat on a personal level specifically to Russians or Russian speakers, since that group is huge in this country and it’d be hard to even identify who such people are, since a lot of people are, for all practical purposes, bilingual.

But there is the reality of lawlessness and violence, which has increased sharply. And we’ve all seen the scenes on television that show that. And I believe Putin’s concern specifically in Crimea was that similar incidents had occurred in front of the regional parliament that week, and there was the concern that such violence could then extend south to the Russian base in Crimea.

DESVARIEUX: Okay. And I want to get a sense of how ordinary people, as well, are dealing with what’s happening in Ukraine. Can you speak to the different political factions and how they’re reacting to Russian movement into Crimea?

PETRO: I think the political groups in the parliament, which is dominated by the pro-E.U. groups, which are oriented toward the West, as well as their national supporters, they are, of course, overwhelmingly condemning this as a violation of Ukrainian sovereignty. There have been, however, protests in the East and in the South which have raised the Russian flag over local parliament buildings that have been taken over briefly. And so while popular sentiment I suspect is overwhelmingly unhappy with this intervention, it does seem to have provided a shot in the arm to those groups which, through this, feel some sort of support from Russia for asserting more local self-government and appeal for a more federalistic type of political system in the Ukraine.

DESVARIEUX: Alright. Let’s talk about the transitional government that was put in place after former president Yanukovych was ousted. I mean, people could even say he is currently the president in some ways. You wrote an article for The Nation that a radical nationalist agenda at place in the Ukrainian revolution is currently happening right now. Can you just speak to that?

PETRO: I believe the radicals are a small faction and a minority in Parliament. But the unique circumstances of the transition, in which they played a key role removing–in specifically organizing the removal of Yanukovych gives them significantly greater weight than their numbers suggest. And the way I like to phrase it is that the political power in the parliament can only act at the sufferance of the Maidan, the street which is very largely controlled, I would suspect, by the right sector. So we really have a sort of bifurcation of power between the parliament and the Maidan. And we see this in the role that the Maidan has played in the appointment of ministers.

In the parliament itself, we have a political party called Svoboda, or Freedom, which is a key part of the government coalition currently. And it is this party that, on December 13, 2012, the European Parliament issued a condemnation of that particular party, and of the rise of Ukrainian nationalism more generally, for being–and I quote–“racist, anti-Semitic, and xenophobic”. And it, the European Parliament, at the time called for all other political parties to disassociate themselves from Svoboda and not to form coalitions with it. Well, today Svoboda holds key leadership positions in the parliament, including the deputy speakership. It holds the office of prosecutor general and four ministerial portfolios in the new government, as well as several appointed governorships.

DESVARIEUX: And who’s their base, would you say, Nicolai?

PETRO: Well, their geographic base is in the western regions of the country, although they have party representation throughout Ukraine. I understand from reading descriptions and discussions of the party that there’s a disagreement about how popular it is today. Anton Shekhovtsov, a scholar of Ukrainian nationalism in London, has pointed out that the Svoboda Party’s ratings have fallen. But we really have to go, really, by the percentage that they got in the last elections, in 2012, which is just over 10 percent. And we shall see how they fare in the upcoming elections for Parliament, which are scheduled at the end of this year.

DESVARIEUX: Okay. Let’s talk about how you would resolve this Crimea crisis. I know you’ve written about this. Can you just sort of give us a play-by-play of how you would have resolved this?

PETRO: Well, I don’t have any magic wand, but it seems to me that it’s no coincidence that this crisis blew up in Crimea. And the reason is that it is so easy for Russia to apply pressure on Ukraine there. Russia has several thousand military and their family in Crimea, and as a result, I think sentiment against the chaos that they see in Kiev is very high.

So for this to stop, the status of Crimea has to be something that is decided by the local residents. And I think the West can take four steps to accomplish this.

First–and this has already been done, according to today’s agreements–provide quick and massive economic assistance to Kiev, although one of the things that I would have hoped for is that this be done on the condition that hardcore nationalists not be part of the government. This would be consistent with the E.U. Parliament’s own resolution on the danger of Ukrainian nationalism.

A second point–or a second step, I should say, is that in exchange for this marginalization of the nationalists, they could demand that Russia immediately withdraw its troops back to bases in Crimea and publicly declare that it has no territorial ambitions in Ukraine. This is actually something that Putin said yesterday. So far, so good.

Third step is to press the government in Kiev and the government in the capital of Crimea, Simferopol, to agree to the terms of an internationally supervised referendum on the status of the island by the end of this year. I think it’s important not to rush this referendum, but indeed to have it validated, and for it to take a little bit longer so that people can really think about their status in Ukraine and what exactly the pros and cons are of increasing their autonomy.

And lastly, once the status of Crimea is determined, then I think the issue of the status of the Black Sea Fleet will probably need to be renegotiated again, as is provided under the terms of the treaty, by appropriate authorities. So if that authority happens to be the government in Kiev, then this will put pressure on Moscow to abide by whatever new agreement they come to over the fleet. And if it happens to be the government in Crimea, that issue will be essentially resolved, since the support of the fleet retirees and their families will become the island’s main source of revenue.

DESVARIEUX: Alright. Nicolai Petro, visiting scholar in Ukraine, thank you so much for joining us.

Nicolai N. Petro is the Silvia-Chandley Professor of Peace Studies and Nonviolence at the University of Rhode Island. He is currently joining us from Odessa, Ukraine. He served as special assistant for policy toward the Soviet Union in the U.S. Department of State from 1989 to 1990. He has received many fellowships, including two Fulbright…