North and South Korea Talk, but Is Trump in the Way?

Following more belligerence from President Trump's Twitter account, North and South Korea have announced their first direct talks in years. It's a big step towards rapprochement, says journalist Tim Shorrock, but the U.S. could be a major obstacle

Following more belligerence from President Trump's Twitter account, North and South Korea have announced their first direct talks in years. It's a big step towards rapprochement, says journalist Tim Shorrock, but the U.S. could be a major obstacle 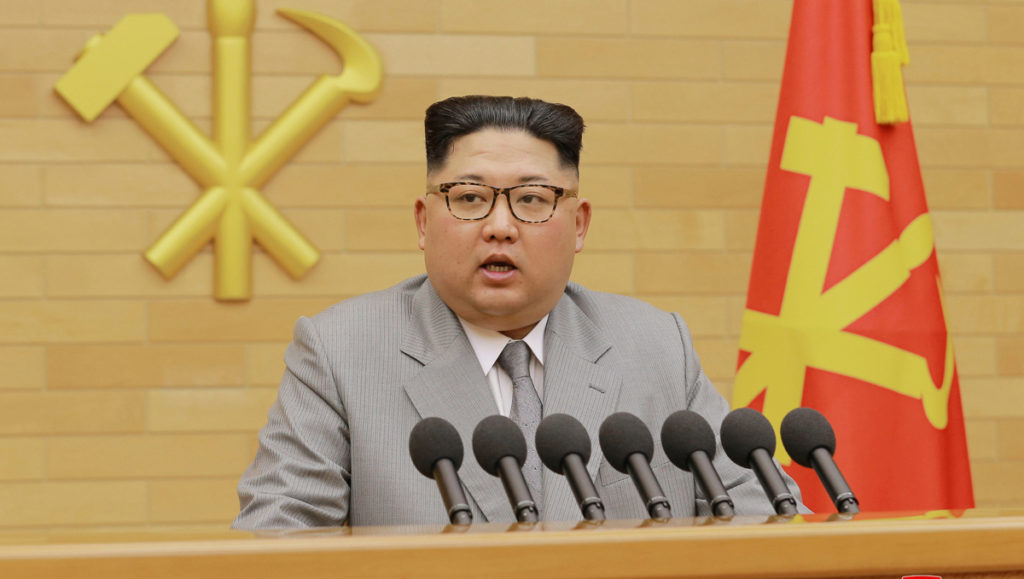 AARON MATÉ: It’s The Real News, I’m Aaron Maté. President Trump’s Twitter account, again, made global headlines this week, when he bragged that his nuclear button is much bigger and more powerful than North Korea’s.

Trump made that comment in response to a New Year’s Day speech from North Korean leader, Kim Jong-un. Un’s address included an overture to South Korea, that is now seeing results. First, North and South Korea reopened a border hotline that had been frozen for nearly two years. Just today, the two sides announced that next week, they will hold direct talks for the first time since December 2016.

Despite Trump’s bellicose talk, he’s even shown signs of backing off. On Thursday, the U.S. and South Korea agreed to delay their planned joint military games that were set for the end of next month. Is all this a sign of warming relations on the Korean peninsula?

Well, joining me is Tim Shorrock, a journalist who has covered North and South Korea for decades. Tim, welcome. What is your reaction to all that we’ve seen this week? Does even today’s news, especially of direct talks between the two sides, signal a shift in how things have been going?

TIM SHORROCK: Well, they definitely signal a shift between North and South Korea. The problem is, I don’t think the United States is very happy about this development at all, although they have postponed the military maneuvers, the military training that’s going to happen, that’s still going to happen after the Olympics.

They’re going to talk about that and hopefully, it will lead to some other kinds of negotiations between the two sides. I think it’s very hopeful, but I don’t think the United States has much to do with it. If you read the official line on this in the New York Times and the mainstream press, and you read these quotes they bring up from Republican and Democratic foreign policy people, there’s a lot of disinterest in this. There’s a thinking that South Korea is sort of operating on its own, as if it’s not a real independent country. That’s a real danger here.

AARON MATÉ: Well, Tim, one of those quotes, I’m going to read to you is from Daniel Russel, speaking to the New York Times. He was a former assistant secretary of state in the Obama administration. He says, “It is fine for the South Koreans to take the lead, but if they don’t have the U.S. behind them, they won’t get far with North Korea. If the South Koreans are viewed as running off the leash, it will exacerbate tensions within the alliance.”

That’s not Trump’s Twitter account, that is a former Obama administration official, talking about South Koreans as “running off the leash.” What is he referring to there?

TIM SHORROCK: Well, he and most other national security people in Washington, whether they’re Republican or Democrat, basically see South Korea as an appendage of the United States. And South Korea is on a tight leash, the U.S. basically, controls South Korea. It’s a very illuminating comment I think. Extremely arrogant. It just underscores the arrogance of America towards both Koreas since 1945.

Daniel Russel, of course, he’s also the same guy who, during the Obama administration, said if Kim Jong-un obtains super weapons, he will die instantly. Obama and his people made similar threats against North Korea. They just didn’t do it quite as loudly, like on Twitter, that Trump has done.

That’s what I’m talking about. That’s sort of underscoring this … The U.S. thinks that, well, South Korea can only do what we tell them to do. Moon Jae-in has been very, very frustrated since he was elected president, last May, because he ran on a platform of trying to defuse the situation by having negotiations and having direct talks with North Korea.

In that sense, I think, Kim Jong-un, reaching out to the Moon Jae-in government and saying, “Let’s have some discussion,” shows that maybe the two Koreas are going to, you know, can move in their own direction and try to defuse this situation.

By the way, the last talks between them were in 2005, so it’s actually a little bit longer than you said at the top of the show. The last talks were with the Park Geun-hye government, who was overthrown and was impeached. Those talks hardly went anywhere because the South Korean government at that time, had such a hard line against North Korea.

I think this, there’s real opportunity here, but there’s also danger that people like Daniel Russel and his equivalent, and the Trump administration, can really throw a cold water on this and turn it, and try to torpedo any kind of discussions that go on.

AARON MATÉ: What accounts for the bi-partisan hostility, as you say, towards North/South Korea engagement?

TIM SHORROCK: That’s hard to say. I think that this is the attitude that most American officials have towards South Korea. It’s because of the fact that the U.S. has operational control of the Korean military during times of war. And the fact that the United States has played such a central role in South Korea militarily, politically, economically for so many years. It just kind of gives them this attitude towards South Korea, that basically, is an attitude of an imperial power toward a colony.

AARON MATÉ: Right, Tim. On this front, this is where I wonder about, to what extent this issue is even about the Korea’s at all. We know that Obama made his so-called pivot to Asia, investing a lot of military capital in the Asia Pacific. Now, South Korea is a huge component of that, over 27,000 U.S. troops stationed there.

TIM SHORROCK: I think for a lot of the national security proud here, the real enemy is China and China’s growth, China’s expansion, China’s increasing role as a military power, and a lot of American policy, including Obama’s shift to Asia, was directed at China.

They basically have also treated China like it’s an imperial power over North Korea, the way they view South Korea, so that the line here still is, “Well, China’s got to do more.” It essentially asks China to force North Korea economically and militarily, to give up its nuclear weapons. North Korea doesn’t have that kind of relationship to China and it’s not going to take [inaudible 00:09:10] pressure.

China and Russia continually say that this has to be a resolved through negotiations and diplomacy, not war. More recently, the Russian foreign minister has been very outspoken about the fact that he sees that the U.S. is really escalating this situation. He was very critical a few weeks ago of the last military exercises the U.S. did in the … I think they were in November, at a time when North Korea had actually stopped its testing for quite a few days, quite a few weeks.

There was a period of time there, where there was an opportunity to sort of begin some kind of diplomatic approach. Instead, the United States and South Korea started these air exercises, where they brought in all the heavy weaponry of U.S. Air Force bombers and the attack fighters that would lead an attack on North Korea. I think this sent a signal to North Korea that, well, they’ve got to keep developing their weapons.

Not soon after those exercises, they did test that very long, their very large, latest missile, that long-range ICBM. The Russian foreign minister was very critical of the U.S. because he said he thought, he was given the impression that the U.S. was going to use this pause in North Korea’s testing as an opening. And more recently is also, that the Russians have expressed interest in playing a role.

I think there’s some constraints on what Trump wants to do with his people, who I think, are being led by H.R. McMaster, his national security advisor, as well as advisors like John Bolton, from the Bush administration. Bush was very hardline.

AARON MATÉ: Tim, finally, speaking of constraints, looking ahead to these talks next week between North and South Korea, let’s say they go as far as possible and they do lead to an effort to make peace. Can that happen without the endorsement of the U.S. given the huge influence that the U.S. has over South Korea, with its massive military presence there?

TIM SHORROCK: Well, it depends on what kind of agreement you’re talking about. I think the U.S. is open to reducing the tension and taking steps, you know, they’re in favor of South Korea taking steps to reduce tensions with North Korea.

One of the things that Moon Jae-in talked about during his campaign, and he’s often talked about during his presidency, is opening up, as one step, is opening up this industrial zone called Kaesong Industrial Zone. It’s actually in North Korea, just north of the DMZ, where … that was closed during the Park Geun-hye years, about two years ago. And that would sort of bring back this sort of economic exchanges that they had at one point, until recently.

U.S. officials have made very clear that, that would be a brutal problem for the U.S. if they opened up that Kaesong Industrial Zone. I think the U.S. will be very unhappy with any kind of agreement that they saw as reducing the sanctions, or actually putting in jeopardy this militaristic pressure campaign that the U.S. has launched.

South Korea’s under some severe constraints also. It’s really hard to know what they’ll talk about. I think they’re probably going to talk at the Tuesday talks about the participation in the Olympics, whether North Korea will send some officials, whether they’re send some athletes. I think there’s some skaters and skiers who might participate in those games. That would be some real movement.

They’ve said officially, the South Korean government, that they would like these talks to lead to further talks. I think on the initial stage, it’s probably going to be focused on the Olympics and after all, the U.S. officials, including the Trump White House, had said, you’ve got to stick only to the Olympics. I think we’re going to see some real strains. We already are seeing strains in the U.S.-South Korean relationship.

AARON MATÉ: Well, we’ll continue to follow how it plays out. Tim Shorrock, journalist who has covered the Korean Peninsula for decades, thanks very much.