Brazil, Corruption and the Mass Movement

As the Supreme Court of Brazil orders a retrial of convicted PT politicians, Joao Pedro Stedile, Leader of the Landless Rural Workers Movement, says the mass movement must become capable of setting the political agenda

As the Supreme Court of Brazil orders a retrial of convicted PT politicians, Joao Pedro Stedile, Leader of the Landless Rural Workers Movement, says the mass movement must become capable of setting the political agenda 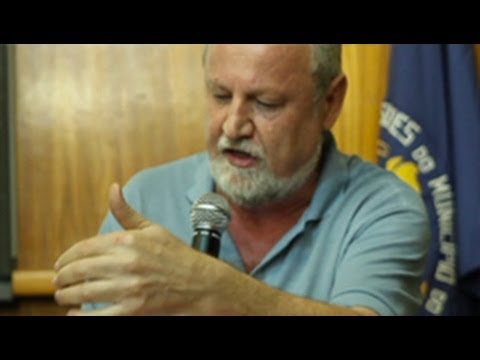 OSCAR LEÓN, TRNN PRODUCER: In Brazil last week, the Supreme Court decided to grant a second trial to the defendants of mensalão. Translated it means a monthly fee, and it represents a political corruption case.

In 2005, PT, the governing party, was accused for bribing the PTB, PL, PP, and PMDB members of Congress, illegally financing their political campaigns with public money in exchange of their vote in favor of PT’s legislation projects.

The scandal was broken by Veja magazine and followed by Jornal do Brazil. Between September 18, 2004, and May 15, 2005, the uncovering of what Luis Barroso, Brazil’s Supreme Court chairman, called “the biggest corruption scandal in Brazilian history,” as many as 40 people where indicted under corruption charges.

However in the article “Mensalão: Why Reopen the Case”, journalist Antonio Martins indicates that there are documents “such as invoices contradicting the alleged misuse of public money for political campaigns.” Now the perception is that even the people on the left have lost confidence in the once popular Workers’ Party.

This political scandal is the biggest stain on the Workers’ Party record. The Supreme Court’s decision renewed the dissatisfaction with the current government, and the political opposition on the right sees its political thermostat rising again.

Meanwhile, the PT and the Brazilian center-left are now on the defensive and trying to rebuild itself after loosing the public’s confidence.

During the mass protests of June 2013, it became clear that there is a great dissatisfaction with the current way of doing politics in Brazil. In the demonstrations that occurred in all states of the country and led more than 1 million people to protest on the streets, the demonstrators were critical of both the center-left and the right.

The protests renewed an ideological debate that was on standby but hadn’t actually disappeared from the political scene.

A great dissatisfaction emerged in society, which grew tired of the non-participative democracy and the influence of lobbying as a way of governing.

The people cry out for answers for everyday problems, such as a poor transportation services, an aggressive police force, and the absence of quality in the public health and education systems.

JOÃO PEDRO STÉDILE, LEADER, THE LANDLESS RURAL WORKERS MOVEMENT (SUBTITLED TRANSL.): What we’re seeing here in 2013 is that we are entering a new period of class struggle. The left forgot to dialog with the youth, and the youth went to the streets to protest. They shuffled the chess pieces and said: “this game is not valid anymore.” And the class struggle as we used to know it went down the drain.

LEÓN: Stédile argues that the role of politics is to build and offer alternatives to society. He understands that people now demand more egalitarian policies and a new meaning to the concept of democracy.

Stédile believes the left needs to provide innovative responses to those demands and bring an advanced model of participation that will produce a more direct and mature democracy.

STÉDILE: The protests alone are not enough. You need to combine them with institutional struggles that will change the power structures of the state.

In order to keep improving living conditions of the broad masses of Brazil, we have to renegotiate the terms of structural reforms. Since the current political institution representation has nothing to do with the people, we need to start with a political reform. The most demoralized thing in this country is called a “politician”. Politicians are the cheaper product, the one thing people are most angry about. There is a crisis of political representation that can only be solved with a political reform that will include other parameters to elect new representatives. The population does not feel in any way that it participates in the policy-making process.

NOOR: The MST leader did not spare criticism to the president, Dilma Rousseff. The current federal administration expropriated less rural properties for land reform than in the previous 20 years. MST, or Landless Rural Workers’ Movement, has already officially withdrawn its support for the candidacy of Dilma when she campaigns again in 2014.

STÉDILE: The right does not have a unified candidate. Dilma will be re-elected because she is the least worst candidate.

What is needed from us on the left is a political struggle. We need to get the movements on the streets to dictate the political agenda that will go beyond elections.

To elect Dilma will not solve any structural problems. Dilma’s second term, if she is elected, will probably be an even more mediocre government than the current one, a weak government of crisis.

The financial surplus is nothing but the kidnapping of public money by finance capital. The government reserves 200, 250 billion reais per year of the public money to pay interests rates.

It is not possible to build a good public transportation system, to invest in urban infrastructure, public education, and health without using that 200 billion assigned every year to pay for finance capital.

So this is the new class struggle. Will you rather give it to the people? Or will you give it to the banks? The pacts that were offered to the population so far have not worked.

LEÓN: According to Stédile’s perspective, Bolsa Familia, the most successful social program by PT government, seems to be just a mechanism of negotiation between the masses and the financial elites, giving something to the poor in exchange so the masses will not enter in any conflict with dominant elites.

Meanwhile, while the PT tries to demonstrate that it remains sensitive to social demands, in international politics the PT defines itself as a party aligned with leftist ideologies.

During the opening speech of the 68th UN General Assembly, President Dilma Rousseff was very critical of the practice of spying by the U.S., accusing them of being illegal and inadmissible.

DILMA ROUSSEFF, PRESIDENT OF BRASIL (SUBTITLED TRANSL.): To meddle like this in the lives of other countries is to injure the international law. It is an affront to the principles that should govern relations between countries, especially between friendly nations.

The rights to security of the citizens of a country can never be secured by the violation of fundamental human rights of citizens of another country.

LEÓN: Taking such a stand against U.S. hegemony on the international stage may be popular at home and throughout Latin America, but it will not satisfy the millions of people that took to the streets demanding economic justice and democratic reforms. It does not address the structural reforms that many say are necessary.

Now the question is, as Stédile said, will the movement in the streets be powerful enough to “dictate the political agenda”?

On a special report by Nerita Oeiras from Rio de Janeiro, for The Real News this is Oscar León.

December 30, 2019
Sign Up for Our Newsletter
Help Us Make Real News!