No Child Left Behind – Too Destructive to Salvage?

FSRN: Education advocates continue to raise serious concerns about the No Child Left Behind policy

FSRN: Education advocates continue to raise serious concerns about the No Child Left Behind policy

President Obama and the Teachers 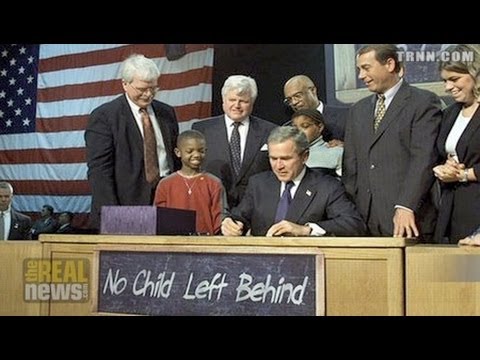 JAISAL NOOR, FREE SPEECH RADIO NEWS: Passed in 2002, No Child Left Behind aimed to usher in a new era of accountability in public education by measuring student achievement through increased testing. A key provision mandates schools show improvement or face tough sanctions, and every school is required to reach 100 percent proficiency in math and reading by 2014 or risk losing federal aid. But high numbers of schools are failing to meet the standards, which prompted the education secretary to create the new waiver program, in which states can now apply for exemption. Despite the reprieve from the tough testing standards, many education advocates are concerned waivers will only be granted to states that adopt the administration’s favored reforms. Karran Royal is the cofounder of the grassroots education advocacy group Parents Across America.

KARRAN ROYAL, PARENTS ACROSS AMERICA: We are jumping out of the skillet and into the frying pan.

NOOR: In its signature Race to the Top program, the Obama administration awarded millions of dollars to states that in part aggressively expanded charter schools and linked teacher pay to test scores. As a public school parent in New Orleans, where 70 percent of students attend charter schools, Royal said she rejects Duncan’s waiver program.

ROYAL: A lot of the requirements of the Race to the Top program are even worse than No Child Left Behind and doesn’t actually provide enough accountability or parental involvement or community involvement. What it really does more of is just makes more testing for children and privatizing of public schools.

NOOR: Other grassroots education advocates, as well as teachers, have also condemned Duncan’s move. They are concerned that Duncan’s waiver plan may be substituted for an overhaul of federal education law. They say it does not change their fundamental criticism of No Child Left Behind, that it has resulted in overtesting of public school students. Monty Neill is with the education nonprofit the National Center For Fair and Open Testing.

MONTY NEILL, NATIONAL CENTER FOR FAIR AND OPEN TESTING: For schools serving poor kids in general, immigrants, programs in schools serving lots of kids with disabilities, English-language learners, racial minorities, all you kinds of groups that typically don’t do as well under our current school system and who are therefore facing the most pressure and whose teachers are facing the most pressure, that pressure is going to stay there, and it may even increase.

NOOR: McKie, a recent immigrant from Grenada, says the overtesting drives students away from school.

MCKIE: That’s why they’re on the street right now [incompr.] ’cause they’re pressuring them and they can’t take it no more. That’s why they drop out.

NOOR: It’s just two days before the state test, but only a handful of the 30 students assigned to the class showed up. That does not surprise Matt Batesky, Shanice McKie’s global history teacher.

NOOR: Batesky and other education advocates worry such policies will discourage teachers from working in high-need communities.

BATESKY: And I think every teacher in the world knows this: it’s much easier to teach in a place where socioeconomic status isn’t as big of an issue. So who’s going to work in the urban schools, who’s going to work in the poor schools, if you’re constantly being told, okay, you’re going to be fired if you don’t do this or you’re going to not be paid your annual salary if you don’t do this?

NOOR: For the past two decades, Lois Weiner has taught education at teachers college in New Jersey, and before that she spent 15 years as a public school teacher. She argues that Duncan’s reforms are an attack on public education. She says rank-and-file teachers must break from union leadership and mobilize to strongly oppose the Obama administration’s harmful education policies.

LOIS WEINER, PROFESSOR OF EDUCATION: Teachers have to take ownership of their unions. Unlike school boards, unions are membership organizations. And we can’t just blame union leaders. We have to understand that the issue here is that teachers don’t see the unions as vehicles for struggle. And I think that if that doesn’t happen, we really are going to see the destruction of public education in this country.