As part of an international day against US intervention in Venezuela, a mobilization in Washington, DC with speakers Daniel Ellsberg and Jill Stein emphasized that Trump is only interested in Venezuela's resources, not in its human rights

As part of an international day against US intervention in Venezuela, a mobilization in Washington, DC with speakers Daniel Ellsberg and Jill Stein emphasized that Trump is only interested in Venezuela's resources, not in its human rights 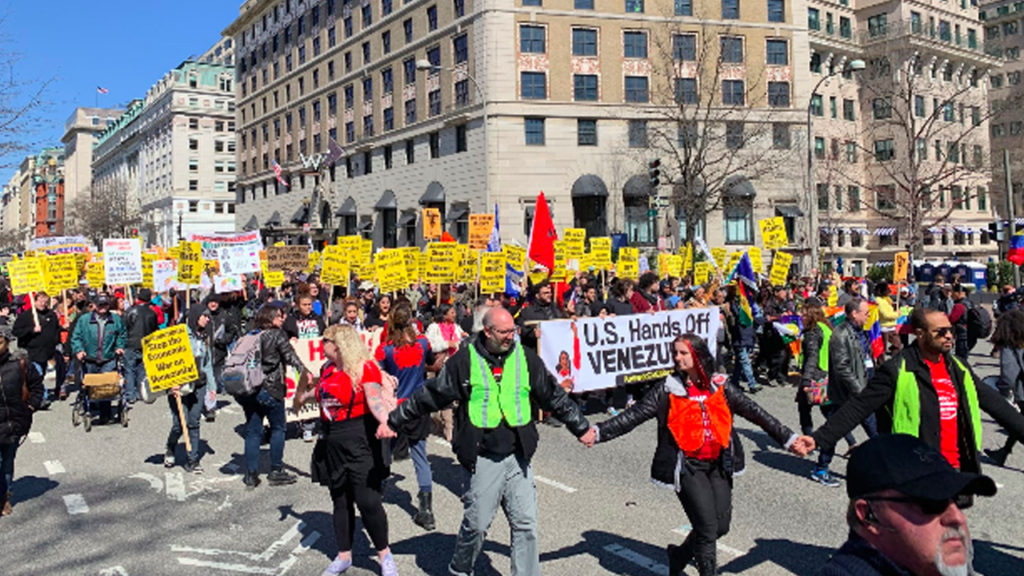 GREG WILPERT: Protesters took to the streets in Washington, D.C. to oppose U.S. intervention in Venezuela on Saturday, March 16. The Washington, D.C. protest had several thousand participants who first rallied in front of the White House.

Max Blumenthal, who recently returned from a factfinding trip to Venezuela, also spoke.

MAX BLUMENTHAL: What we showed at the Grayzone, along with brave Venezuelan reporters, including our friends from TeleSur, it’s a lie. It’s the lie that they try to deploy to escalate a conflict and spark an intervention. And what we also saw walking the barrios, like walking through the communities of Caracas, was the conscience of the Venezuelan people who are mobilizing on a popular level against this coup. It’s because of them and because of their conscience that this coup has failed. It’s not because of some dictator in his batcave with some computers. It’s because of the conscience of the Venezuelan people, that they stood up during an electrical blackout that was designed to destabilize society. And they proved together, and they helped each other find water, and they helped each other charge their phones, and they came together as a community to stand up against the most powerful empire in history, and the worst economic war we’ve seen directed against another country, and they have emerged victoriously.

Our role here is to be the conscience of our own society. What some of our socialist politicians are not standing up and saying very clearly, hands off Venezuela, and they’re kind of playing both sides. It’s our role to be that conscience. It’s our role and our responsibility to protect the Venezuelan people when sociopaths in the White House are calling for war under the auspices of responsibility to protect.

DANIEL ELLSBERG: Thank you all very much for being here. It really warms my heart to see so many Americans were willing to stand up against American imperialism. I was a servant of empire for a while, in Vietnam and elsewhere, before I came to realize it for what it was. For most of the period since Vietnam we’ve been what I would call a covert empire. Covert really means not just secret. It means denial; a policy of plausible denial, where you have cover stories [inaudible] to be what’s really going on. Specifically, we’re a covert empire who denies that they are an empire, that we actually decides who rules another country, and [inaudible] as to who lives and who dies in that country. Who’s the police. Who governs them. [Inaudible] Indonesia, the Middle East, and around the world.

[Inaudible] clandestine operations, I would say that I would have really very little doubt, though I can’t say I’m certain, but I would say the odds very much favor the claims of the government at this time. Which is not a government that can be relied on in every case. I’m sure that Maduro lies like every other government official in the world. You have to judge for yourself circumstances and other sources of information. In this particular case, with the charge of sabotage of clandestine activity, or cyberwar to bring down the Venezuelan government, I have to say the circumstantial evidence in this case is very, very strong.

JILL STEIN: We know also that this is a Koch brothers war in the making, because who is it that has been the big sponsor of Pompeo and Mike Pence? They’re basically owned by the Koch brothers. And so is little Marco Rubio. And these are the guys who are really pushing for regime change. Why do the Koch brothers want regime change? Because they need Venezuelan oil. They need the particular type of crude oil, which you can only get in Venezuela and a few other places. So this is a war for oil if there ever was one.

GREG WILPERT: One Of the organizers of the protest, Eugene Puryear, explained his support for the protest as follows.

EUGENE PURYEAR: I think this protest is critically important because the actions that the Trump administration is taking, they’re being done in our name. They say we’re doing this on behalf of the American people. This is for the American way. We support democracy, and so on, and so forth. But I mean, that’s rank hypocrisy. We certainly know that the Trump administration, and quite frankly most other administrations, support all the most anti-democratic regimes around the world, as long as they toe the line of the U.S. government. So we wanted to be here today to say that no, not in our name; no war, no sanctions, no coup. It’s wrong for the United States to strangle the country with sanctions. It’s wrong for them to promote this coup with a completely unrepresentative process here. And we think that based on what we’ve seen in Iraq and Libya and other countries, it could potentially lead to another regime change war. And we’ve seen how disastrous does have been. In fact, it’s the U.S. interventions that actually make the humanitarian situation ten, a hundred times worse than what it was before, whatever you may say about Gadhafi or Saddam or whoever it may be.

GREG WILPERT: A Venezuelan-born activist was one of the many speakers that addressed the crowd.

ACTIVIST: In 1989, working-class Venezuelans went out to protest what was called El Caracazo, against the neoliberal policies that led to increasing gas prices and bus fares. Today we see attempting to reestablish the same oppressive system of domination and exploitation that gave rise to the Bolivarian Revolution; one they have fought through over 20 years, even through the conditions of crippling sanctions and economic war since the Obama administration, the people continued to build and organize.