Who is Served by Militarized Aid to Palestine? 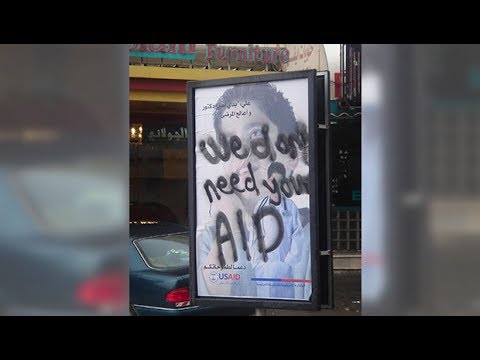 Shir Hever: Welcome to The Real News Network. The recent issue of Reality Check, An Independent Review of Poverty Reduction and Development Assistance has dedicated itself to the topic of aid and militarism, especially in Asia. One of the articles in this journal is titled “Militarism of Palestinian Aid,” authored by Nora Lester Murad and by Alaa Tartir. Alaa Tartir was on The Real News and discussed briefly the significance of international aid to the Palestinian economy. Let’s have a look.

Shir Hever: Now let’s discuss the security and military impact of this aid with one of the authors of the new report, Nora Lester Murad. Dr. Nora Lester Murad is an activist and writer based in Jerusalem, Palestine. She co-founded Dalia Association, Palestine’s community foundation, in order to promote self-determination and development, as well as Aid Watch Palestine to mobilize Palestinians to hold aid actors accountable, especially in the Gaza Strip. Murad writes about international aid, community philanthropy, and life under military occupation through her blog “The View from My Window in Palestine” and has published in The Guardian, Al Jazeera, OpenDemocracy, Mondoweiss, Huffington Post, Jadaliyya, and more. Thank you very much joining us, Nora.

Shir Hever: The country which receives the most amount of aid in history has been the state of Israel, and most of this aid is military aid from the United States. The US is also giving some aid in a much smaller amount to the Palestinian Authority in Ramallah. A portion of the aid to Palestinians is also kind of security aid for things such as armored vehicles, firearms, and uniforms. How can the US arm two sides of the conflict? Or would you say that the Israeli government and the Palestinian government, they really are two sides of the conflict?

Dr Lester Murad: As we all know, the US arms everybody. They arms the Saudis and the Qataris. They armed Iraq and Iran. So funding two sides of a conflict is not new policy for the United States. They do this because it’s hugely profitable. Putting arms proliferation into the context of aid may confuse some people, making it appear that the US is helping promote democracy and peace, but what it’s really promoting is profit for the military-industrial complex. Military aid is not, as some think, cash that goes to allies so they can defend themselves. It’s taxpayer money that’s given almost directly in many cases to the US military contractors. What the foreign governments get is weapons and training that they use to promote US military interests in their own regions.

Shir Hever: Yeah. I want to continue with the point of Palestinian oppression because you begin your piece in Reality Check with a quote from the US Foreign Assistance Act. The quote is, “No assistance should be furnished under this chapter of the Arms Export Control Act to any unit of the security of a foreign country if the Secretary of State has credible evidence that such unit has committed gross violations of human rights.” We know that this rule has been violated multiple times and in many places of the world, but can you give us an example or several examples of human rights violations which would’ve disqualified the Palestinian government from receiving military aid?

Dr Lester Murad: Yes, I can. Of course, the same Arms Export Control Act should also exclude Israel from receiving military aid. But when we’re talking about the Palestinian Authority, it’s absolutely true that there are increasing concerns by international sources like Amnesty International and Human Rights Watch, as well as local human rights organizations and defenders that the Palestinian Authority is becoming increasingly oppressive. The extrajudicial killing of Abu Halawa in Nablus is one example, and there’s evidence of arbitrary arrest and detention, torture and ill treatment, violations of freedom of expression and assembly. As far as I know, the PA is even using outdated Jordanian legislation to ban media critical of the PA, even arresting people for comments made on Facebook.

What’s important to keep in mind is that these violations by the PA are being funded in part by international donors. Why would international donors fund the PA despite these violations? Because they comply with Israeli wishes. So while the international community blames the PA, I think that’s a bit disingenuous. The PA is essentially totally dependent on foreign funding and foreign political support. If they were doing something the US and Israel didn’t like, for example, when they tried to use UN mechanisms to claim their rights, they would be made to stop it. More and more, luckily, people like Diana Buttu and her brave New York Times opinion piece are speaking openly saying that the PA does not represent them and should be closed. There have not been elections to legitimize their current mandate, and they’re not accountable to the Palestinian people, only to Israel and donors. So I do believe-

Shir Hever: Yeah, I think … Sorry. I think you are also making a point that I don’t want to be missed here, that when you say international donors, you mean not just the United States but also European Union, Arab countries, and so on.

Dr Lester Murad: Absolutely. I think the US and other international actors bear some direct and indirect responsibility for the violations of the PA by funding them directly and, maybe more importantly, by obstructing normal accountability processes that could enable the Palestinian population to keep the PA in line.

Dr Lester Murad: Several ways. One big and understudied factor is the role that US-led anti-terrorism policy has played in distorting the availability of funding for civil society, not only in Palestine but all over the world. First of all, organizations seen as philosophically or ideologically opposed to Israel and the US don’t get funded. They just don’t. If there’s a doubt about their political position, they won’t be funded. Those who do receive funding are forced into what I consider to be dangerous contracts. They have to agree to enforce US foreign policy on their own communities, becoming a kind of ideological police. They’re forced to or they’re pushed to work outside of their mandates ensuring that people the US doesn’t like are excluded from the benefits of their work even when this internal policing promotes intra-communal conflict, undermines their own credibility in the community, or when it violates humanitarian principles of neutrality and impartiality.

I should also say the pressure is not only on Palestinian civil society but also on international civil society organizations who often change the work they do, change the partners they work with, and change the regions they work in in order to attempt to comply with US restrictions. Most recently, the international governments and many donors have put pressure on Palestinian civil society by refusing to fund any actions that support the Boycott, Divestment, and Sanctions campaign. In some cases, grant recipients aren’t even allowed to support BDS even with their own funds. This, I think, is a dramatic violation of Palestinian civil society’s right to express itself, to resist occupation, and to pursue the non-violent means at their disposal to pursue their own human and civil rights.

Shir Hever: Yeah. I have to add to this that I’ve personally been exposed to cases in which civil society organizations providing kind of services such as health or education were forced to let go some of their own workers just because these workers on their free time were supporting a certain political party, which was not supported by the United States or something. So they were forced because of these contracts that you call dangerous contracts to leave the organization.

Now that you’re also bringing up the issue of international civil society organizations, that segways into the issue of UNRWA, which is the largest international aid organization operating in Palestine. Two weeks ago, Israeli Prime Minister Netanyahu told the US Ambassador to the UN Nikki Haley that UNRWA, the largest aid agency distributing aid to Palestinians should be dismantled. Let’s have a look at what he had to say.

Translation: “I told her also that it’s about time that the UN will consider the continued existence of UNRWA. Since World War 2, there were and there are also today tens of millions of refugees, and those tens of millions of refugees have a high commissioner in the UN. Yet the Palestinian refugees, which are most of them, almost all of them settled, they have a separate commissioner, called UNRWA. In UNRWA in its institutions there is a lot of incitement against Israel. And therefore UNRWA in a large extent by its very existence and unfortunately in its actions on occasion, makes the Palestinian refugee problem permanent and doesn’t solve it. And therefore the time has come to dismantle UNRWA and to merge its parts with the UN high commissioner for refugees.”

Shir Hever: My question to you, what can donors actually do, and what should they do in order to ensure that aid will improve the lives of Palestinian and protect their rights rather than contribute to the violation of their rights?

Dr Lester Murad: It’s a really important question. I’ve done a lot of research and writing on that in many, many forums, and there are so many things that donors and that individuals, members of global civil society, can and should do differently if they’re serious about leveraging their power to protect rather than to violate Palestinian rights.

I would start by saying that they should function within the framework of international law and international humanitarian law even though it’s not perfect. What they call beneficiaries should be recognized as rights holders, and donors should be recognized as duty bearers. This would facilitate Palestinian rights claiming by taking aid out of the de-politicized, technical context where best practices are seen as aspirations with no teeth.

Second and related, I think the international community should fulfill its own obligations to respect, protect, and fulfill Palestinian human rights. This includes not paying for the costs of Israeli dispossession, occupation, and colonization. It means not allowing Israel to profit from its aggression, not enabling Israeli impunity by normalizing settler colonialism and apartheid.

Beyond that, I think the donors themselves should recognize their own accountability to the Palestinian population. If they want to say that what they’re doing is aid, then the right to judge whether it’s helping or not and to what extent belongs to the people for whom the aid is intended.

Shir Hever: Yeah. I think this is maybe a beginning of a longer conversation about how aid to Palestine should be restructured and redirected, as you say. I thank you very much for these comments, and I hope you will agree to join us again in the future to continue this discussion. Thank you very much, Nora, for joining us.

Shir Hever: And thank you for joining us on The Real News Network.

Nora Lester Murad, PhD, is a writer and activist from the US living in Jerusalem, Palestine. She co-founded Dalia Association, Palestine’s community foundation, and Aid Watch Palestine, a civil society initiative to make aid accountable to Palestinians. She blogs at www.noralestermurad.com.