Former Ohio Sen. Nina Turner says there are oligarchs influencing the government in the United States, but Sen. Bernie Sanders definitely isn't one of them.

Former Ohio Sen. Nina Turner says there are oligarchs influencing the government in the United States, but Sen. Bernie Sanders definitely isn't one of them. 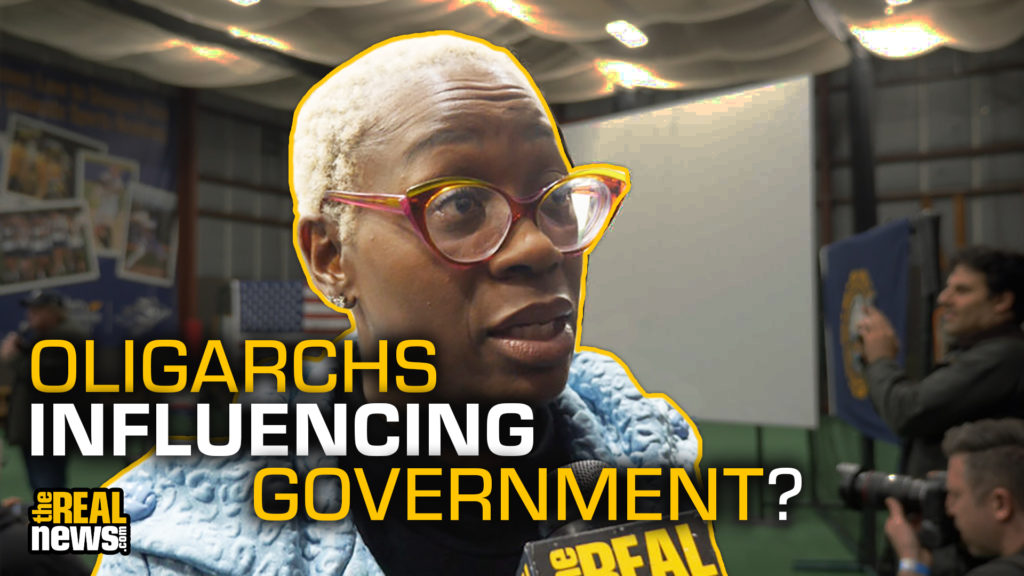 Speaker 1: We are at a turning point in this nation and we cannot continue to do things the same old way that they’ve been done, that somebody has to stand up and call it out and be willing to put a lot on the line to be the change that they want to see in this world of, quoting brother Mahatma Gandhi.

Speaker 2: Mayor Pete has the greatest amount of support by billionaires. Why is it important that the Sanders wing of the party, the progressive wing, really take him on going forward?

Speaker 1: Because we can’t continue to go down this path. Billionaires control everything in this country, from policies, to all of the money, to the greed. We need to… We already got one billionaire in the White House who is giving away the farm to all of his friends, and dare I say, his family. We need a candidate who stands up for the working class, and that candidate is Senator Bernie Sanders, $0 from billionaire. There is a difference. The question must be asked, whose side are you on?

Speaker 2: What do you think of what’s happened in Iowa? A lot of people are frustrated. Do you think the DNC’s going to get its act together?

Speaker 1: People should be frustrated. The Iowa Democratic Party failed. The DNC failed, so the DNC shouldn’t just call out the Iowa Democratic Party. Last time I checked, the DNC creates these parties throughout the state. So shame on them for just calling out the Iowa Democratic Party. The DNC is part of the problem. Iowa left the cloud, not the people of Iowa, and I feel bad for the people of Iowa who pride themselves, as you know, on their caucus and the thousands of volunteers. The voters of that great state don’t deserve what happened to them. This must be fixed so that it doesn’t happen in any other state.

Speaker 2: I know you had an exchange recently about how Bernie is an oligarch, was the argument made. Any response to that?

Speaker 1: Jesus. You know what? It’s ridiculous. $2 million compared to $60 billion. There is no comparison. The person made that argument is mistaken, doesn’t know what he’s talking about. It’s faulty. Bloomberg and others are oligarchs in this country. Let’s call it what it is, when you use your money and your power to influence government and to flat out buy this office. Ain’t got to take my word for it, look at what’s happening all over this country. It is time-out for that.

So we’re going to start calling out people for who they are, whether you are the oligarch yourself or you taking billions of dollars worth of donations from wealthy people to try to stop progress in this country, whether it be the Green New Deal, whether it be college for all, or Medicare for all. You have in the candidate of Mr. Buttigieg somebody that is bending to the will of those types of donors, as he talks against the Green New Deal. He said it’s spending too much money.

He talks against college for all, “Can’t be done,” or, “I don’t want to send wealthy people’s kids to college.” You ain’t going to send wealthy people’s kids to college because they don’t need that kind of help. And Medicare for all, he wants Medicare for all who choose, understanding that you cannot have a two-tier system like that. We already have that right now, it’s called Medicare and Medicaid. We already have a two-tier system right now, that’s called millions of people in this country who are either underinsured or uninsured.

We need bold vision and bold leadership. Senator Bernie Sanders has more than proven himself throughout the decades that he is the type of champion who will continue to not only to stand up, but take it to the streets on behalf of the working-class people of this nation.

Speaker 2: Finally, we were going in the streets and there was people calling for the moderators to talk about climate change and climate justice and calling out candidates that are taking money from billionaires, from fossil fuel billionaires. What’s your message to young people that are trying to make this a central issue?

Speaker 1: This is the way we’re going to get the change. That’s why our campaign is about Not Me, Us. We have to take it to the streets and make our voices heard and make it known that we not going to tolerate it anymore. And then we’ve got to start coming for these people’s seats. Either they going to raise money in a different way… We can do that differently now. I get it. Once upon a time, you felt like you had to do it that way. But Senator Bernie Sanders has shown very clearly, twice, that you can raise money, grassroots dollars, and raise enough money to compete.

We need a pure paradigm shift in this country. It’s not just going to happen automatically, we going to have to force it. So I shout out my sisters and brothers who taking it to the streets to say no more fossil fuel… Another type of forum that we need to have is one about poverty. The Reverend Dr. William Barber of the Poor People’s Campaign, he’s carrying on the mission of the Reverend Dr. Martin Luther King Jr. He’s been asking and asking the DNC for the longest time to do a forum about poverty. So we got to stand up and talk about those issues as well. God bless my sisters and brothers who calling these politicians out.

United together, we are going to bend the body politic and force the people that we elect to office to do the right thing for once in their lives. Don’t answer to the billionaire class, but answer to the people. [inaudible 00:04:52] somebody.