Hardliners Determined To Undermine ‘Historic’ Prospect of Peace with Iran

While US and Iranian government take steps to resolve issue of sanctions and Iranian nuclear program, Israel remains an obstalce

While US and Iranian government take steps to resolve issue of sanctions and Iranian nuclear program, Israel remains an obstalce 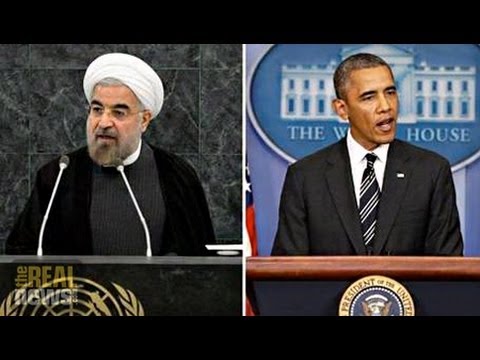 During a speech at the United Nations on Tuesday, Israeli Prime Minister Benjamin Netanyahu threatened a military action against Iran if the Iranian government continues its uranium enrichment program. President Obama also said the U.S. will not rule out a military option against Iran. The threat comes amidst the highest level of diplomatic negotiations in three decades between Iran and the U.S. and after a historic phone call that took place between the nations’ leaders.

Now joining us to discuss this is Nader Hashemi. Nader is the director of the Center for Middle East Studies at the Josef Korbel School of International Studies at the University of Denver. He’s the author of Islam, Secularism, and Liberal Democracy: Toward a Democratic Theory for Muslim Societies.

NADER HASHEMI, DIRECTOR, CENTER FOR MIDDLE EAST STUDIES, UNIV. DENVER: Happy to be with you.

NOOR: So, amidst these historic talks and negotiations between the U.S. and Iran, we have been witnessing hardliners, whether it be Benjamin Netanyahu or the neocons in the U.S., or some of those who received President Rouhani when he returned to Tehran and pelted him with shoes and eggs, all come out against these talks, or at least the proposal or the idea that this could be a real–this could lead to a real solution between, like, the nuclear standoff between Iran and the U.S. and Israel. What can we make of these latest developments?

HASHEMI: Well, I think you’re right to call them historic. This is the first time that the head of an Iranian government spoke on the phone, had any sort of direct contact with the head of the U.S. government. I think there is an alignment here of forces, both on the Iranian side and on the American side, who are very interested in resolving the nuclear question and Iran’s sort of troubled relationship with the Western world through the process of diplomacy. You know, the atmospherics, the tone, the optimism on both sides has never been at such a high level. And so I think there’s a very real prospect for the first time in a very long time at some serious headway and momentum that has been generated, resulting in perhaps a resolution of these issues.

NOOR: And how serious are the threats being lobbed from every side of this, of all the major actors in this scenario?

HASHEMI: I think they’re very serious. You know, I think both the hardliners–Iran has its neocons just like the United States does. They, you know, inadvertently play a mutually reinforcing effect on one another. Both sides, both the hardliners in Iran and the neocons and the Republicans and the pro-Israel lobby in the United States sort of focus on each other’s statements and try to claim that these statements are representative of the entire political constituency on the other side of the debate. And so there are groups that have vested interests in thwarting a resolution of this question, because their power, their prestige, or their careers are deeply rooted in keeping this animosity and these tensions alive.

But on the plus side, I think both the governments–the newly elected government in Iran has been given a green light by the senior leadership of the Islamic Republic, and the Obama administration is seriously, I think, committed to trying to resolve the nuclear question or the question of sanctions and Iran’s role in the region diplomatically. So I think, you know, there’s some serious room for optimism, but I would highlight and add the adjective cautious optimism.

NOOR: And the significance of the acknowledgment of the Jewish Holocaust for the relations between Iran and Israel?

HASHEMI: Well, I don’t think that acknowledgment is going to affect how the state of Israel and the government of Israel, particularly the Netanyahu government, views Iran. Whether Iran acknowledges the Holocaust or denies it, I think in many ways that issue was really a side issue. It was just used by the state of Israel to try and highlight Iran’s uncompromising nature and to pursue for a very hard line toward the Islamic Republic of Iran. So I think that that issue was really, you know, not the source of the grievance here and not the source of the problem that Israel and the United States has with Iran.

NOOR: And, finally, how do you evaluate how the mainstream media has covered this issue and, you know, whether it’s brought up the fact that while Israel is demanding Iran give up its nuclear ambitions, nuclear program, it itself is armed to the teeth with nuclear weapons, the only Middle East power to be armed with nuclear weapons?

HASHEMI: You know, of course, the mainstream, you know, I think, media representation of this issue, while claiming to be sort of neutral and balanced, of course reflects a particular American, Washington, D.C., foreign policy consensus on these issues. So there’s just an assumption built into the argument and built into the media debate that we will judge countries by different standards. If you are a friend, an ally of the United States, well, you’re allowed to have nuclear weapons, you’re allowed to, you know, pursue policies without any scrutiny or any criticism from the West. But if you’re on the other side of the equation, well, then, you will be held to a higher standard.

So you’re right, the nuclear question here–and this is a point that Iranians, the Iranian government and people who are sympathetic to the Iranian government, often raise–why is Iran sort of being scrutinized, sanctioned? Resolutions are passed against Iran for its nuclear program. It doesn’t have a nuclear weapon. It says it doesn’t want one. It has signed the nuclear Non-Proliferation Treaty. But other allies of the United States–Israel you mentioned, Pakistan–not only are they not members of the nuclear Non-Proliferation Treaty, but they have an extensive nuclear weapons arsenal. But no, sanctions, no criticism. So that’s unfortunately the way the world works.

Iran on its own side has a double standard. It sort of claims that it’s sort of a victim of terrorism. It doesn’t like authoritarian regimes. But it’s backing its own set of authoritarian regimes, such as the one in Damascus today who is committing, you know, crimes against humanity against its own people. But that’s perfectly alright for the Iranian regime.

So, unfortunately, that’s the way, you know, regional powers and international powers pursue their policies. Everyone has double standards.

HASHEMI: Happy to be with you.

Nader Hashemi is the Director of the Center for Middle East Studies at the Josef Korbel School of International Studies at the University of Denver. He is the author of “Islam, Secularism and Liberal Democracy: Toward a Democratic Theory for Muslim Societies” and co-editor of “The People Reloaded: The Green Movement and the Struggle for…