One Year of Modi’s Rule in India: Systematic Attack on Constitutional Values 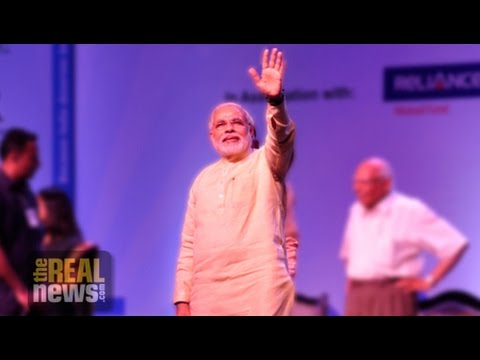 Prabir Purkayastha (PP): Hello and welcome to our joint programme with Real News and Newsclick. We have with us today Harsh Mander and we will discuss one year of Modi regime particularly with respect to how it has affected the working people. Harsh, good to have you with us. We talked about in the earlier section attacks on the working people. If we look at the kind of attacks we have seen on the constitutional values, do you think this one year period that we have had is qualitatively different from what the BJP for instance NDA government did in the earlier period of Vajpayee or do you think it is the continuation of the same policies?

Harsh Mander (HM): There were elements certainly of what we have seen today during Vajpayee’s regime. But there is qualitatively in fact, quantum difference given firstly the majority that they carry. Secondly, I think the kind of openly majoritarian discourse around the back of which this government came to power with this large majority. Thirdly, the personality of the Prime Minister himself which is aggressively majoritarian and authoritarian. I think, all of those add up to much more open assault on some of the most important constitutional values. The way, I would like to suggest we think about it I see our constitution built around in the preamble, the three principle pillars of liberty, equality and fraternity. In our last section, we spoke a lot about the assaults on equality and I will set that aside. But let us look at liberty and most importantly fraternity. Briefly on liberty, the idea of freedom in a democracy, I think the essence of it first lies on the freedom to disagree with official policy. But what this government has clearly communicated and what I call a deliberate un-subtleness, it is not behind the scenes, it is very much upfront, deliberately ham handed in order to intimidate large segments of civil society into submission. So we welcome foreign capital which has much more profound influence on the way we live our lives, on the way we think, what we eat, how we dress etc. What the media tell us, but foreign solidarities with any kind of questioning on grounds of equity, on grounds of sustainability of this economic growth model is seen as anti-national. So this discourse has really grown very shrill during this one year and this is then followed up by deliberate ham handed bullying of organizations which have not fallen in line. That’s one. But I think along with that the freedom also to choose one’s religious identity, one’s food habits and so on and so forth has also come under the grave challenge. The constitution has taken a lot of care to take that we have the freedom not just to pursue the religious faith but also to propagate it. But now conversion has seen again as an anti-national activity which needs to be criminalised, which needs to be blocked. The idea of ‘Ghar Vaapsi’ or home coming suggests that it is only Hindu faith which is truly Indian and anyone who goes into Islam or Christianity which they have done largely because they have not found social equality within Hinduism is seen again as anti-nationalism and they need to be welcomed back like a prodigal son back home into the Hindu, truly Indian identity and the ban say on beef, there is not even universal Hindu prohibition on beef. It is an upper caste, segments of the upper caste community of the Hindus who don’t eat beef but they have criminalised dietary habits of religious minorities and of the lower castes through this ban. And telling you how can love, how you can marry and how you can have sex, all of these is one part of assault on freedom.

PP: Harsh you raised very important questions that what government does and what other groups under the protection of the government not openly so do. In fact, I would argue that lots of attacks on minorities, attacks for instance the ability of young women and men to fall in love all these are being done ‘other organizations’ which could be in a larger sense caught act on civil society organisations as well because they are not part of the government. Now, this is also in fact part of what could be called mass censorship. It is the mob censorship rather more correctly. We have a system of mob censorship. So in this sense, what do you see a relationship between ‘mob censorship’ and mob intimidation as well as governmental intimidation. How do you see this play out?

HM: Sure. I think these kind of rabidly bigoted majoritarian groups are no longer fringe. They become mainstream. More and more they are trying to make the left liberal resistance to these kinds of groups are being pushed to the fringe and this has become center stage because this is clearly the ideology of the government formation and the social organisations, the RSS and hundreds of other organizations under its cover are basically flourishing under the protection of this larger umbrella. You don’t really have to go very far. It is true that a lot of it is non-state actors but I think what is significant is that the Prime Minister himself may be just about a year before he actually entered the race. His kind of discourse is not at all different from much of what we are hearing today. We might like to forget about it but that is a fact and Amit Shah and the kinds of people who helped to bring him to power and to think that bring a genie out of bottle in order to get elected, the genie of hate kind of organisations and then you can comfortably put them back and cork the bottle even if you wish to, assuming they wish to. It is not possible.

PP: Let’s go back to the spoiled still. One is of course you talked about genie out of bottle and putting it back and it is also called dog whistle politics. You say things which mean something to people who know and something else apparently to others. It’s been a kind of dog whistle politics which we are seeing. The double meaning that is used for different forms. But there is even more important issue that you raised earlier that the national movement, this is the stream which lost out. In fact, Indian national movement rejected the stream which existed right from the beginning and rejected this Indian unitary state based on religion or ethnic identity. That is what was rejected and Indian constitution really reflects what won out. Do you see in this victory of Modi, the belief of a certain section that they have now reversed that?

HM: I completely see it . That is the larger story of what we are seeing. We are seeing a sense of triumphalism. Today is where Gandhi has really and Gandhi because he was symbolic of this belief system of much of the freedom movement. It is not important that it is Gandhi but that the majority of Indians, Hindu, Muslims etc. followed the idea that India would be a country that regardless of your faith or lack of it, you would be a fully citizen in equal citizen in every kind of way and this country belongs equally to Hindus, Muslims, Christians, non-believers and so on. I think that core idea has been defeated temporarily in the triumph with which Modi has come to power.

HM: In parliament, he talked about 1200 years of slavery which he has come to end. What is that means? That means that not just the period of British colonialism but also the period where the majority of our rulers were Muslims was a period of slavery according to him. Combined with the idea of this 56 inch chest kind of thing that he is the only man, man enough to be able to take on the enemy within which is the Muslim, which is the Christian and tame them, secular national and perhaps, first of all secular nationalist, the liberal secular nationalist so he is able to tame them and show them their place. So I think what we are witnessing today, you know one can talk about labour reforms, one can talk about, those are sort of elements in this. But, I do feel that we need to recognize that the assault is on much larger Idea of India which goes much deeper than the details and it’s a renegotiation of the terms on which minorities can live in this country.

PP: How do you think the Indian people will respond to this? Do you see them accepting this or do you see there is every possibility of fight back and recapturing that space.?

HM: I have great faith that contradictions as I said are deepening faster and more visibly than one had imagined. A year ago, Mr. Modi’s triumphalism has seen to suggest that it was a fort which could not be breached for a very long period of time. It is already showing many cracks. I think that is because of the nature of the Indian nation. I do believe and that been a faith me that many friends disagree. I think that it’s been a very unequal civilization. I think it is more than any other civilization it has sanctioned inequality and that’s been our big problem. But, it has also been a very inclusive civilization and I think that for instance, the Delhi election results one can speculate. I do believe that when I said it in television I was attacked a great deal by whole set of BJP spokespersons. I do believe that the attacks on churches hurt the majority of the Hindu community. Christians are not more than 2 percent of our population but I think they didn’t like this kind of public expression of hate on gentle segment of our society. I think that the assaults on fraternity and the assault on the rights of farmers and workers will collectively I hope will build a solidarity. I mean that we need to see that the Muslim, the Christian, the Dalit, the landless worker, the small peasant, the unorganized worker, all of them or the factory worker who has been pushed out of any kind of labour protection, all of them see build a solidarity. That is when the resistance will really have the impact

PP: Thank you Harsh. We would be with you again to discuss this government and what else it is doing.