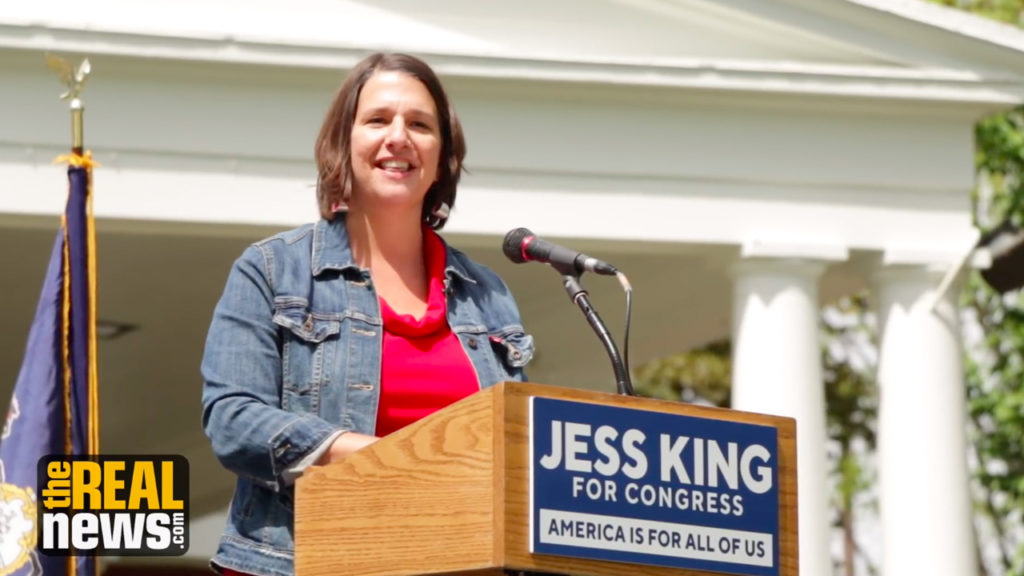 TAYA GRAHAM: It’s something that pundits say could not be done: A progressive Bernie Sanders-backed Democrat running a surprisingly competitive race for a conservative seat in Congress.

JESS KING: If 47 percent of our children in this beautiful city live below the poverty line, then my kids are not well. I know when the economic struggles in suburban and rural school districts all across this community grow that we are not well.

LLOYD SMUCKER: The NRA, I’ve said before, tens of thousands of members in my district. The NRA really is a body of individuals who are concerned about their Second Amendment rights.

TAYA GRAHAM: It was a race that until recently seemed out of reach. But a new poll shows the battle is too close to call. A recent snapshot of the race from Susquehanna Polling Research shows Smucker leading King by just 4 points, 50 percent to 46 percent, with 3 percent of the voters undecided. It’s a tightening of the contest, because several months ago Smucker enjoyed a sizable lead.

ISMAIL SMITH WADE-EL: So here’s my fundamental belief on all this, is that there are thousands, even millions, of people in the country who have actually never had genuine, authentic, progressive values articulated to them, in their terms, on their doorstep.

TAYA GRAHAM: The 11th Congressional District was newly drawn after the state Supreme Court ruled Pennsylvania’s congressional district favored Republicans. But According to Ballotpedia, the 11th District also includes two so-called ‘pivot counties,’ York and Lancaster, that switched from voting for Barack Obama in 2012 to Donald Trump in 2016, and both have a disproportionate number of Republican voters.

So why is a Democrat running as an unabashed progressive in conservative territory finding success? Perhaps it’s because a progressive messenger appeals to the same pivot voters.

ISMAIL SMITH WADE-EL: When I think about Lancaster County, when we talk about college for all, you know, my question is when was the last time you went to somebody from a farming family and said, Look, your family has fed Pennsylvania for generations. Why should you worry about going broke if you get sick, or going broke trying to give your child a better life? And that’s a value, that’s a progressive value that anybody can get on board with.

TAYA GRAHAM: A point highlighted during a recent debate, when King hit Smucker hard for his votes against Medicaid and Social Security.

JESS KING: He voted to cut half a trillion dollars from Medicare and Social Security. Half a trillion dollars. And so to talk about protecting Social Security and Medicare, when this is something that our seniors are depending on, and yet making a vote to cut that much money from programs, does not mean protecting and keeping them sound for the future for those seniors.

LLOYD SMUCKER: Not only did not vote for that, but I worked on a specific bill that I introduced.

MODERATOR: So is this just wrong on that vote?

LLOYD SMUCKER: Yes. That is incorrect.

JESS KING: We have it on video footage, him agreeing at Budget Committee on the budget cutting half a trillion dollars from Medicare and Social Security.

LLOYD SMUCKER: I voted to protect both Medicare and Social Security.

LLOYD SMUCKER: The Budget for a Brighter American Future restores regular order, and puts Congress on track to spend within our means.

TAYA GRAHAM: She also criticized his campaign’s dependence on corporate PACs, which led to this exchange.

JESS KING: And I’ve also made a commitment to not take a dime from corporate PACs. I think this is essential in our political moment to talk more about where money comes from, especially if it has a profit motive attached to it. Fifty-two percent of Congressman Smucker’s money has come from PACs. Like none of mine has come from PACs. Individuals have funded our campaign. And 70 percent of his campaign’s have come from out of the state. Ours is like 55 percent out of state. So he gets more money from out of state than I do, and our money comes from people. His- more than half of whose money comes from PACs. More of his money comes from outside this district than mine. If he’s making that claim against me as, like, a big, a big issue, look in the mirror, sir.

TAYA GRAHAM: It’s a push for progressive ideas that King has emphasized throughout the campaign. Like when she held a press conference outside Smucker’s office calling for Medicare for All.

JESS KING: So, after having to switch insurance for the third time this year, I’m more excited than ever to talk about how we can transform our health care system from this complicated tangle of private insurance plans to a patient-centered universal system that covers all Americans with the medical care that we need, regardless of our job or our income.

TAYA GRAHAM: A message that could turn a red congressional district, and possible blueprint, for Democrats across the country.

This is Taya Graham and Stephen Janis reporting for The Real News Network.