Nelini Stamp says Warren addresses race, gender, and class like no other candidate does.

Nelini Stamp says Warren addresses race, gender, and class like no other candidate does. 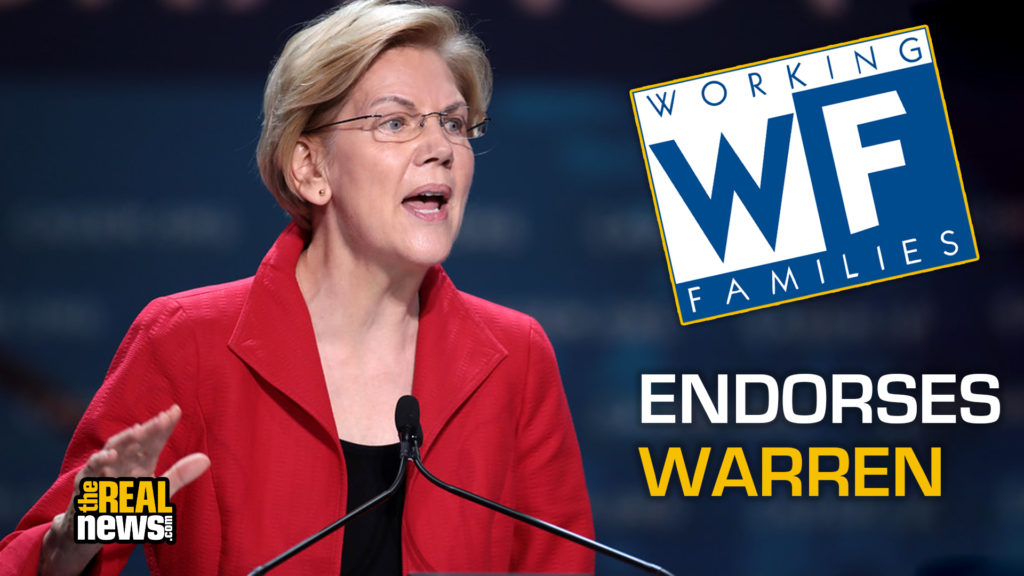 And I’m here with Nelini Stamp. She’s the director of organizing for the Working Families Party. Thanks so much for talking with us.

NELINI STAMP: Thank you so much for having me.

NELINI STAMP: Yeah. Well, we had a process where we interviewed any candidate that actually went through our process and submitted a questionnaire and our organization, which is made up of individuals, organizations, grassroots movements, voted to endorse Senator Warren in September.

And I think it’s because for the last decade and even plus, Senator Warren has been working with communities when she fought to pass the CFPB, the Consumer Financial Protection Bureau. She did that with outside and not being in the halls of Washington and did that with grassroots organizations, institutions, movements to take on the Republicans, to take on the Democratic establishment and the banks and win. And so I think she has a vision that our members and our organization really believe in.

JAISAL NOOR: And so is the biggest issue for the Working Families Party defeating Donald Trump, and if so, why is Elizabeth Warren the best candidate do that?

NELINI STAMP: I think yes, part of one of the big things for the Working Families Party is defeating Donald Trump. We also need to make sure that we defeat the Senate. We also want to make sure that we hold onto the House. So we see it as a full picture, and we want to flip state legislators across the country; and not just flip it with Democrats that don’t believe in our issues, but actually progressives that are going to fight for things like Fight For 15, paid family leave, and all of our issues.

And we do actually believe that Senator Warren is a great person to beat Donald Trump for a few reasons. One is that even though she’s been in Massachusetts for a while, she grew up in Oklahoma, she knows what it’s like to grow up working class and can also speak to people across the spectrum. People see her vision of universal healthcare, universal childcare, breaking up big tech and they want that vision. And we think we need somebody who has the experience of going up against Republicans and Democrats and banks and special interests and winning. And she does from winning the Consumer Financial Protection Bureau.

JAISAL NOOR: And as far as the primary goes, some people have said that Senator Warren doesn’t necessarily have the support in communities of color right now, according to some polls, that she would need to secure the primary. And so she doesn’t necessarily have a path to victory. What’s your response to that and what kind of work are groups doing to build that support?

NELINI STAMP: Well, I think that it’s evident that still a majority of people of color, communities of color are still undecided in this election. Because really every four years, people come knocking on our doors and expect us to show up. And so it’s organizations like ours, a bunch of grassroots organizations that are out there that have been doing the work of engaging communities of color year round, all the time that they’re going to listen to. And so we’re hoping to talk to our base.

And I think that one of the things that I would say is that when you saw black women come out doing a process with over a hundred–now 300–black women who are standing with Senator Warren, and when you have all of these communities that are still undecided, I think it’s something that we really do need to talk about. And what I see is, just this weekend or a few days ago, there was a Latino tour through Texas, through the Rio Grande Valley. And that’s the commitment that I want to see to our communities. And I think that she’s actually doing the work to make that happen.

JAISAL NOOR: And as far as the issue of taking on big money in politics, taking on the power of big corporations, that has been a fight in the Democratic party for decades and Elizabeth Warren has been a big figure in that. Do you think that she is the best, will be the best candidate to sort of lead the progressive movement forward and why?

And I think the other thing is that she addresses race, gender, and class in a way that I think no other candidate does. And I think that can unite a bunch of progressives, right. You have a candidate who’s out there who chose her biggest speeches to be Lowell, Massachusetts, where there was a working women’s strike years ago, Atlanta, the washer women’s strike. She chose to talk about Francis Perkins and how Francis Perkins was actually the figure behind the new deal. And I think that that’s really important because in telling those stories and talking about radical struggles, she’s actually leading us a pathway forward of who can actually lead these movements. And I really believe that she is a candidate that progressives can get behind.

JAISAL NOOR: Do you have faith that the progressive movement will be able to unite even after this primary because there are still going to be these fights that are ongoing within the party and outside of the party to bring real progressive change because it has gotten kind of ugly in the last few weeks.

NELINI STAMP: Yeah. I mean, I think the progressives will unite. I think we see the bigger picture as well. We know that there are people who are fighting deportations. We know that people are fighting living paycheck to paycheck. And for folks who do grassroots organizing community work, grassroots work with rural communities, we’re going to put our communities front and center.