Nafeez Ahmed: US and its regional partners have long term interest in region's oil and are using gas attacks as pretext for military action

Nafeez Ahmed: US and its regional partners have long term interest in region's oil and are using gas attacks as pretext for military action 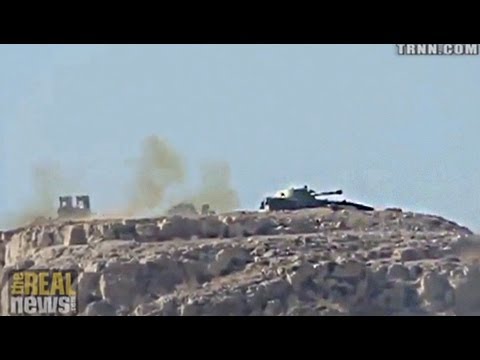 On Monday, President Obama did six separate televised interviews as he made his case for intervention in Syria.

BARACK OBAMA, U.S. PRESIDENT: It is important for Assad to understand that, you know, the chemical weapons ban which has been in place is one that the entire civilized world, just about, respects and observes. It’s something that protects our troops, even when we’re in the toughest war theaters, from being threatened by these chemical weapons. It’s something that protects women and children and civilians, because these weapons by definition are indiscriminate.

NOOR: However, some have questioned what the true motives of the United States are in intervening in Syria.

Now joining us to discuss this is Nafeez Ahmed. He’s a best-selling author and investigative journalist, executive director of the Institute for Policy Research and Development. His recent piece for The Guardian is “Syria Intervention Plan Fueled by Oil Interests, Not Chemical Weapons Concern”.

Thank you so much for joining us, Nafeez.

NOOR: So, Nafeez, explain why you argue that it’s not humanitarian intervention, it’s not Assad’s alleged use of chemical weapons in Syria that’s driving this push for intervention.

AHMED: Well, the reason I think that chemical weapons is unlikely to be, you know, a main kind of primary motive, or even the issue of humanitarianism, is because the policy of–this policy of sidelining Syria or undermining Syria or even regime change in Syria began over seven years ago with the previous administration. And, in fact, it may even go back longer.

I mean, I think the first indication that we had came from Wesley Clark, who was, you know, former NATO supreme allied commander, who has said several years ago that shortly after the 9/11 terrorist attacks, a colleague of his told him about a memo talking about multiple wars in the Middle East after Iraq, including Iran, Libya, and Syria. And so this was one of the first indications that there was actually a plan [incompr.] in the region, including Syria specifically.

Subsequently, we had evidence that some kind of operations, covert operations were underway to actually move toward some kind of agitation in Syria. You know, we had–the State Department had a so-called policy group known as the Iraq-Syria operations group that was running various kinds of operations to do with, you know, financial issues, sanctions, as well as more kind of worrying black-budget type operations. That was followed up by with–you know, we had further reporting by people like Seymour Hersh in The New Yorker and others, as well as presidential findings, that revealed that actually there were concrete covert operations being carried out by the CIA, by the Pentagon as well, and that these operations were designed to destabilize the various powers linked to Iran, including Syria. And regime change was discussed as a component of these policies.

So it’s clear that the policy in the first place came about–you know, was more influenced by chemical weapons attacks. And this policy of targeting Syria had already began many years ago and has reached this point where, you know, the uprising that is taking place–and it’s a very real uprising–it’s–you know, the people are very–Assad is a brutal dictator. But what’s happening now is that that is being exploited by Britain, the United States, in order to pursue interests that have already been there many years ago. And I think that these interests are–there’s a number of interests, but these are linked into various plans for pipeline reserve.

It’s important to member that Syria itself doesn’t have very substantial oil and gas reserves domestically, but it could play a very big role as a potential transit route for shipping oil and gas, specifically gas, to various markets. And there is competition to control the role of Syria in this. And this competition primarily has been playing out between Qatar, which is currently heavily involved in the conflict in Syria, financing rebels, financing virulent elements of the rebel forces linked to al-Qaeda, Islamist extremist rebels–Qatar is heavily involved.

Now, Assad declined this pipeline project because he felt that it would endanger his relationship with Russia, because the pipeline was designed to bypass Russia. He instead signed a deal where–a year later for an alternative pipeline with Iran. And this pipeline project would involve Iran teaming up with Iraq, another Shia state, that would supply gas being shipped through Syria. The Russian port of Tartus in Syria would also play a role in transporting the gas. So that’s how Russia was amenable to this. And eventually this would also end up supplying gas to Lebanon. And potentially the pipeline could be extended to supply European markets as well.

So essentially we have this competition between these two pipelines, one of them backed by Iran, one of them backed by Qatar. And I think this was a very, very central issue in determining why it is that the United States, the U.K. would feel that Assad was a liability. And it just fell into this overall strategy of sidelining Iran, sidelining Syria. If this pipeline, pro-Iran pipeline would had gone ahead, you know, it could have really been a game changer for Iran, would have really dramatically increased its influence on the world stage. But this couldn’t be allowed. So I think this certainly has played a major role in what we’re seeing.

NOOR: And, you know, the media has largely ignored this kind of–this history and this background, as well as the long-term U.S. involvement in Syria and the region. Kind of make the case. How should the U.S. public react to this information? And how should this affect the arguments being made for and against the war or U.S. intervention?

AHMED: Well, it’s a difficult one, because, you know, I personally feel quite conflicted about the whole thing. It’s very understandable that people feel that something needs to be done about Assad, purely on the grounds of the way in which he has overwhelmingly brutalized the majority of his own population. I think, you know, if we look at the data, all the available data that has come out from United Nations, from international observers, human rights experts shows that Assad is clearly, you know, overwhelmingly complicit in war crimes. The rebels are also complicit in war crimes, but to a lesser extent. So he is the greater evil in Syria.

The problem is is that the idea that we have a choice of whether we want to intervene is in a way covering up the reality that we have already been intervening. The United States and Britain were training rebel forces in late 2011 before the violence kicked off in the way it did. I mean, obviously, Assad was already shooting people in the street, you know, say, after July  2011. But, you know, one can question the extent to which this violence would have escalated if the rebels were not being trained at that time. I mean, there were leaked documents from the private intelligence firm Stratfor–these are email communications where intelligence analysts were in communication with Pentagon officials. We had notes of various meetings. And these emails revealed not only this training, but also that the rebel movement, the Free Syrian Army, was not really much of a fighting force at the time. So we’ve already played a role in re-creating that. And if Assad was aware of that–and he probably was–he probably could–he would have seen that as a provocation, and that would’ve obviously radicalized his accident. I mean, he has indiscriminately targeted civilian populations, and there’s no excuse for that.

But it would be naive to assume that we did not play a role in kind of pushing this conflict further. I mean, we continue to do that. It’s–unfortunately, here we can see that the goal of the United States and the United Kingdom isn’t really alleviating the suffering of the Syrian people, unfortunately. The goal is very much about these geopolitical interests, about making sure that we can secure the right kind of regime in the aftermath.

And this is why, you know, there has been this back and forth [incompr.] I mean, there’s a very interesting statement in some of those emails from Stratfor which I mentioned where we have a description of the Pentagon officials saying that basically the United States has a very high tolerance for killing in Syria and that they’ll only consider an intervention in the event of a very public massacre which enters the media. And it certainly seems that the chemical weapon attack played this role and has triggered the interest in exploiting public sentiment for an intervention.

So, you know, I’m not going to basically say I’m pro-interventionist or anti-interventionist, but I think it’s very important that people are aware of what are the real goals of intervention. And, you know, it’s very difficult to see a genuine humanitarian element here. And if that’s the case, then an intervention is very likely to maybe even–it could well make things worse.

NOOR: Nafeez Ahmed, thank you so much for joining us.

Dr. Nafeez Ahmed is a bestselling author, investigative journalist and international security scholar. Formerly of the Guardian, he is a columnist for VICE and Middle East Eye, and the creator of Insurge Intelligence, a crowdfunded investigative journalism project. His latest book is a scientific monograph for Springer Energy Briefs, Failing States, Collapsing Systems: Biophysical Triggers…