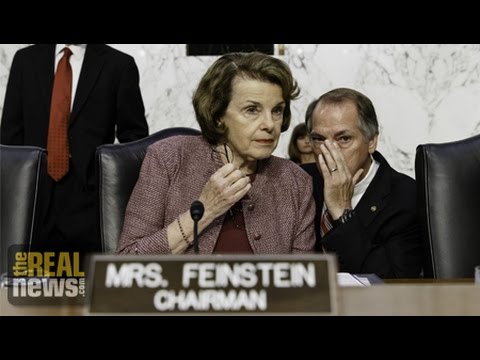 In breaking news on Tuesday, the Senate Select Committee on Intelligence released the executive summary of its scathing, long-awaited, and embattled report on the CIA’s rendition, secret detention, and torture program. The full 6,000-page report remains classified.

Now joining us to discuss this from Grand Rapids, Michigan, is Marcy Wheeler. She’s an investigative reporter covering national security and civil liberties at EmptyWheel.net and other news outlets.

NOOR: So we’re hearing some new details out of this report. For example, 26 of the 119 known detainees in the program were wrongfully held. But leaks of the torture report provided to McClatchy, for example, had previously revealed much of what the press is covering now. You’ve had a chance to read some of this report. Can you tell us some of the information that you found? And what is most shocking or most important for the public to know?

WHEELER: Well, I think some of the details of who were mistaken identity detainees, for example Gul Rahman, who was frozen to death on the floor of a prison in Afghanistan in 2002, this report acknowledges that he was a case of mistaken identity. There was another guy named /dʒɔnɑtˈguːl/, who was the subject of a 2005 Steven Bradbury memo. Again, we had no reason to hold him. He was hallucinating. We made him crazy. So not just that they shouldn’t have been detained, but the people we kept and killed and tortured, incredibly, were among those we kept.

And it took CIA three months, often, to figure out that they had the wrong person. So they’d keep them in these prisons. They’d lose track of them. As recently as last year, CIA was insisting that their numbers were correct, but they couldn’t come up with the correct number of all the people they’ve disappeared. There’s stuff in the report that makes it clear from the start that they intended to literally disappear these people. They wanted Abu Zubaydah to disappear for the rest of his life.

NOOR: And so the Bush administration had maintained that this process, this program was humane, it was legal. The New York Times has reported on the CIA’s statement, on its response, and they said it only tells part of the story and there are too many flaws in it to stand as the official record of the program. And we know the CIA had this long battle with the Senate Select Committee about releasing this report. And they went back and forth for years, really, about it.

Talk about the timing of this report. Why now?

WHEELER: Well, why now? Because Dianne Feinstein’s about to cede the chair of the Senate Intelligence Committee to Richard Burr, who would bury it quickly.

But I think the CIA’s claims that this only provides part of the story is correct in so far as the White House has gotten the CIA to withhold a bunch of documents that implicate the Bush White House. So we know that George Bush wasn’t fully read into this torture program. But we don’t have all the details about what the Bush White House did know, because Obama is keeping that secret. And that’s pretty remarkable. But at the same time, the CIA claims that this isn’t the story, that they needed to be interviewed and so on and so forth. But that would suggest that 6 million CIA documents are fraudulent. And I would suggest, if that’s the case, if that’s what the CIA is now arguing, then that should be just as big a scandal, that these years and years and years of documentation don’t reflect the reality of the torture program.

NOOR: I wanted to get your response to the ACLU’s executive director, Anthony D. Romero. And he said,

This report definitively drags into the light the horrific details of illegal torture, details that both the Bush and Obama administration have worked hard to sweep under the rug. The government officials who authorized illegal activity need to be held accountable. The administration’s current position–doing absolutely nothing–is tantamount to issuing tacit pardons.

He went on to say,

The report should shock President Obama and Congress into action to make sure that torture and cruelty are never used again.

Again, that was Anthony D. Romero, the executive director of the ACLU.

What’s your response to the calls from civil rights and human rights advocates that say that the people responsible for this need to be held accountable and that there needs to be legislative action to ensure this doesn’t happen again? Because the Obama administration dismantled this program, but that was never put into law, from my understanding.

WHEELER: I think a better lesson is–I mean, it is true that Obama has only issued executive orders to end the torture program, but I think the better lesson from this and the reason why Obama won’t pardon the torturers as Romero suggested is because he is still or at least was, as recently as 2012, relying on the same presidential finding, the same presidential order that authorized torture for his drone strikes.

And Obama can’t pardon Cheney and Addington and Tenet, because if he did, he would have to acknowledge that the same presidential order he still relies on was used to authorize war crimes. So he can’t do that.

NOOR: Marcy Wheeler, thank you so much for joining us.

WHEELER: Thanks for having me.