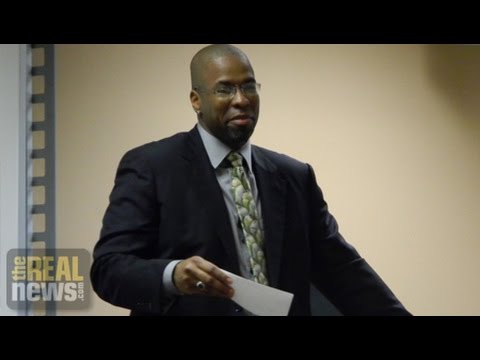 In breaking news, alleged CIA whistleblower Jeffrey Sterling was convicted of the Espionage Act Monday afternoon. Sterling faces years in prison for allegedly leaking details about the botched CIA plan to sabotage Iran’s nuclear program to New York Times journalist James Risen for his 2006 book, State of War. Risen refused to testify the trial, but that did not stop Sterling from being convicted of all nine remaining counts he was facing.

Now joining us to discuss this from Grand Rapids, Michigan, is Marcy Wheeler. She’s investigative reporter covering national security and civil liberties at emptywheel.net and other outlets. She is the author of Anatomy of Deceit, a short primer on the prewar intelligence and CIA leak.

NOOR: So you’ve been closely following this trial. You weren’t in the courtroom today, but give us your reaction. You wrote on your blog, emptywheel, that you’re not surprised by this conviction.

WHEELER: I think the government had a really strong closing argument and took what is an entirely circumstantial case and made a good argument that Sterling had spoken to Risen in some way involving the story. And the jury, having not been given some of the other evidence or much of the other evidence about some of the other potential culprits, found him guilty. And they found him guilty not just for leaking things to James Risen, but also causing him to publish this story, which is interesting.

But they also found him guilty for obstruction of justice for destroying a 2003 email in 2006 at a time when Sterling was living in Missouri. And the reason that’s interesting is because his case was charged in Virginia. It might have been more compellingly charged in Missouri, but they charged him in Virginia because the government loves to have CIA trials right in CIA’s backyard. And it’s really tough to understand how the jury convicted on that charge–not because the evidence (I think that was probably the easiest count to find him guilty of), but because I can’t conceive of anything that happened in Virginia, and therefore that shouldn’t have been charged in Virginia at all. But, nevertheless, the jury found him guilty of that count as well. So nine counts altogether.

NOOR: And this case is entirely circumstantial. There’s no direct evidence linking Sterling to this leak.

WHEELER: No, there are two minutes and 40 seconds of phone conversations, the content of which we don’t have any knowledge, before Risen had his complete draft of a story that The New York Times quashed in April 2003. There’s an email sharing an unclassified CNN story on Iran’s nuclear weapons from March 2003. And then there are further communications from 2004 and 2005, when Sterling lived in Missouri. Again, we don’t know the content of any of those. We’ve got snippets of email conversations that say things like, I really want to talk to you.

And then the one other thing. We know, for example, that details of Sterling’s performance review show up in the book. And that’s one of the things the prosecution brought up in the closing argument that I think made it clear that Sterling had some conversation with Risen about it. And then there was a detailed–it wasn’t submitted as evidence, but nevertheless the jury got to hear it, that Sterling’s prior attorney had called the CIA saying he might go to the press in early 2003. Now, the jury wasn’t supposed to take that as evidence, but if they did, I could see why they would find that compelling, even though the government didn’t have the evidence to submit that in their case-in-chief.

So that–I mean, I’ve said online–I also covered the CIA leak case against Scooter Libby, and I can tell you that there was far more direct evidence implicating Libby and Cheney in leaking Valerie Plame’s identity than there was against Sterling, and nobody did any prison time for that.

NOOR: And I was just reading the New York Times coverage, and according to them, the Justice Department used the fact that Sterling actually went to Congress about his concerns over this CIA operation in Iran and he was left frustrated because of that. He said he faced workplace discrimination. And they actually used that against him in the trial and say he was a disgruntled employee.

WHEELER: They used all of his complaints against him to say he was a disgruntled employee. The defense made a point that all of the phone records that the government pointed to as proof of guilt are tied just as closely with Sterling’s setbacks in court against the CIA. And that’s something we know he and Risen spoke about. So, having no idea what the evidence is, you could say that was just as much about him talking to Risen about his discrimination and his inability to publish a book.

One of the most interesting things about the trial is the defense was not allowed to tell the jury that Sterling’s equal-opportunities lawsuit against the CIA was ultimately dismissed on state secrets ground, because the government declared state secrets over some of the same employment records, CIA employment records that got submitted into this case at trial. So all of a sudden they’re not state secrets anymore. But the jury didn’t get to hear that.

NOOR: And he faces years in prison. And this is part of what critics say is the Obama administration’s war on whistleblowers. What are the broader implications of this? ‘Cause Sterling is the first person to be convicted under these kind of draconian laws.

WHEELER: Right. Other people have pled out, and he’s found guilty, and found guilty not just of actually leaking information to Risen, but causing Risen to publish, to try and publish an article, and then to publish a book. And that’s one of the things that I think journalists should pay really close attention to, because having pursued Risen’s testimony for nine years and then ultimately given up on it, by the time the trial came around, the government was presenting Risen as this empty vehicle. And so their story was the only reason for this story about Merlin to be published was that Sterling was a disgruntled employee, even though it’s very clear Risen and other sources for that chapter, which the government–I mean, that doesn’t–that in no way would get Sterling off if he were in fact a source for Risen, that Risen used other sources, but it is clear that he had other sources. But it sort of diminished the possibility, which is in fact the case, if you read even the chapter, much less the entire book (now, the jury was only allowed to read the chapter), that there was really good reason to be concerned about this operation. The CIA still insists it was a great success, but the evidence submitted at trial made it very clear that they screwed up certain things about handling Merlin, the Russian, and about some of the evidence, and that it was far less successful and far, far less closely held then they told the jury.

Now, I couldn’t present that case to the jury, but I plan on presenting that case in weeks ahead. But the notion that CIA said this was closely held is an utter farce. And the notion that Sterling now faces decades in prison for it is really telling, because it says that CIA can have a completely incompetent operation and then use a trial to get its reputation back, which I think the defense compellingly argued was what they were doing, but also face no responsibility for their own screwups. It’s all Jeffrey Sterling’s fault, even though the record actually shows Sterling was trying to fix the CIA’s handling problems with this operative.

NOOR: And the last time we spoke, we were talking about the release of the CIA torture report, and, of course, no one has been prosecuted for that, which I think can be widely–it was widely agreed that it revealed some horrible cases of torture and did not lead to any intelligence that stopped terrorist acts.

WHEELER: Right. And the only person–but there were actually two people with CIA ties who went to prison, one a guy named David Passaro, who may have done it, but he didn’t get a fair trial, and then there’s John Kiriakou, who was sent to prison for disclosing the identity of one of the torturers in a document, ultimately the /wʌnənər/ document that was never released. So he actually didn’t disclose it, but nevertheless he did two and a half, three years of prison time as well.

So the other thing that–you know, against this background, it’s very clear that only the little guys, only the guys who try to push back against the CIA, are ever going to be held responsible for the kind of leaks that go on.

NOOR: Well, Marcy Wheeler, thank you so much for joining us.

WHEELER: Thanks for having me.