Will a probable Obama presidency herald the birth of an Obama doctrine replacing the Monroe doctrine - in terms of a new, more equitable relationship between the US and Latin America? Economist Mark Weisbrot is not so sure. He tells Pepe Escobar, Obama in his foreign policy will be mostly absorbed by the wars in Iraq and Afghanistan and by intractable Middle East problems. Although the Obama camp seems to understand slightly better than the McCain camp some ground breaking transformations that took place in Latin America during the Bush years, Weisbrot argues they will have to be really creative to restore US credibility in the region. That means, among other things, a stop to the demonization of Venezuela and an understanding that Latin America is becoming more united than at any point in history.

Will a probable Obama presidency herald the birth of an Obama doctrine replacing the Monroe doctrine - in terms of a new, more equitable relationship between the US and Latin America? Economist Mark Weisbrot is not so sure. He tells Pepe Escobar, Obama in his foreign policy will be mostly absorbed by the wars in Iraq and Afghanistan and by intractable Middle East problems. Although the Obama camp seems to understand slightly better than the McCain camp some ground breaking transformations that took place in Latin America during the Bush years, Weisbrot argues they will have to be really creative to restore US credibility in the region. That means, among other things, a stop to the demonization of Venezuela and an understanding that Latin America is becoming more united than at any point in history. 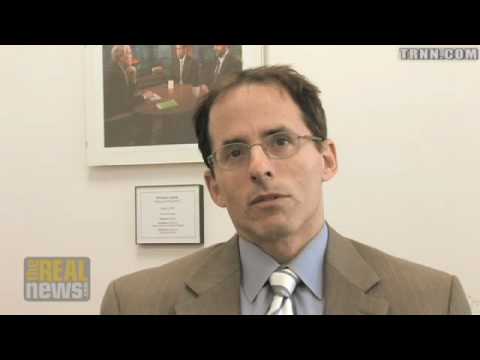 (A short message from a member)

BELLA LAM, REAL NEWS MEMBER: And I think The Real News, what I really like is at least it tries to engage us to really learn more about the issues that affect us.

PEPE ESCOBAR, SENIOR ANALYST, TRNN: I’m here with Mark Weisbrot, co-director of the Center for Economic and Policy Research in Washington. We’ll be talking about maybe the end of the Monroe Doctrine, maybe the beginning of the Obama Doctrine, US relations with Latin America in a new era. MArk, welcome to The Real News.

MARK WEISBROT, CENTER FOR ECONOMIC AND POLICY RESEARCH: Thanks. It’s great to be here.

ESCOBAR: Mark, can we say that in case Obama is elected, that will be sort of the end of the Monroe Doctrine, and we’ll be facing an Obama doctrine—better relations between, on a more equal footing between the US and Latin America? Or this is pie in the sky?

WEISBROT: Well, a lot of changes have already taken place. I mean, the United States has lost enormous influence in Latin America over the past decade. In fact, I would say that most of Latin America is now more independent of the United States than Europe is, which is very different from anything we’ve seen in the last 150 years. So I think these trends will continue, regardless of what Obama’s explicit decisions are about foreign policy. The other thing is that the US import market can’t grow, is not going to grow; in fact, it may shrink for exports from Latin America. And so it doesn’t have that kind of clout, either, that it used to have. And then you have also the political changes that have taken place. You have these left governments in, you know, Venezuela, Bolivia, Ecuador, or Argentina, Brazil, Nicaragua, Uruguay, Paraguay—all these governments are different, and they’ve changed the equation. They created new institutions, UNASUR, for example, the Bank of the South. South American integration has advanced, and in fact will advance more as this recession will show how dangerous it is to just tie your economy to the United States, because the hardest-hit countries in the region are going to be Mexico, Central America, the Caribbean—all the countries with free trade agreements, or so-called free trade agreements, that are tied to the US economy.

ESCOBAR: Give us a critical assessment. Do you think the Obama camp really knows what’s going on, especially in South America—Venezuela, Bolivia, Paraguay, Ecuador, Brazil, Argentina?

WEISBROT: Yeah, that’s where I would say there is a big difference between Obama and some of his advisers—not necessarily the Latin America ones. But certainly Obama himself and some of his top advisers do see the world differently from the McCain camp.

WEISBROT: Yeah, but also, I mean, there’s a different sense of the world. I mean, if you look at the Washington foreign policy establishment, they’re still mostly in denial of what’s happened in Latin America. You know, they realize the United States has lost influence there, but they see it as kind of a temporary thing due to the distractions in the Middle East. They don’t see that these are structural changes that have taken place, that they’ve taken place because of a whole period, the worst, really, economic failure in modern Latin American history has taken place over the last 30 years, which was engineered by the United States. So that’s another reason why you had all these elections in these countries with voters going over the heads of the established political class and saying, you know, "We have to have a different economic policy." So they don’t see that.

ESCOBAR: And in the last debate, Obama’s and McCain’s position vis-à-vis Venezuela, they were indistinguishable, no?

ESCOBAR: It was a sort of cheap demonization.

WEISBROT: Yeah, although you see that a lot of Obama’s positions in these debates are indistinguishable from McCain. And you can’t read that much into that, because this is a campaign, and Obama is going for certain voters. He’s saying the things that he thinks are going to get him elected president.

ESCOBAR: Mark, you’ve just been back from Venezuela. Suppose you are talking to an undecided or independent swing voter in Florida, North Carolina, Ohio. You have one minute to explain Hugo Chávez and 10 years of Bolivarian revolution. What would you say?

WEISBROT: Well, I would say first of all that most of what you’ve seen in the US media is false and misleading, and that, you know, Venezuela is a democracy. They’ve had tremendous improvements, especially in the last five years. The economy’s grown more than 85 percent. In real terms, it’s huge. Unemployment has been cut by more than half. Poverty has been cut in half, and that’s only counting cash income. People have health care there, poor people have access to health care that never had it before; vastly expanded access to education, especially higher education. So these are the reasons why Chávez is popular in the country. In fact, the latest poll showed him with an approval rating of 75 percent. And so those are the things we have to understand. And if he has a fight with President Bush and the Bush administration, it’s not really of his own choosing; it’s because our government supported a military coup against [inaudible]

WEISBROT: Yeah, and has continued to pursue a policy of regime change against the democratically elected government there.

ESCOBAR: And Obama also said that, regarding Colombia, and I quote, "Colombia has a right to strike terrorists who seek refuge across their borders." This is crazy, because this is a preemptive Bush doctrine applied to South America.

WEISBROT: Yes, and it was profoundly rejected by everyone in this hemisphere at the Organization of American States, except for the United States and Colombia.

ESCOBAR: And at an UNASUR meeting, at the last one.

WEISBROT: Yes. Well, there are two, although at the last UNASUR meeting they decided to intervene in Bolivia on the side of the Bolivian government.

ESCOBAR: On the side of—exactly. On [inaudible]

WEISBROT: Yes. So, yeah, you know, I think if you had a state with 27 electoral votes, where all the people that believed that Elvis Presley was still alive were living, you would see a presidential debate about whether the King is still alive, and how the media is covering it up, and so on. This is the kind of surreal world that we live in when it comes to election year politics and Latin America. It’s all determined by South Florida.

ESCOBAR: So there won’t be an Obama doctrine, as you see it now?

WEISBROT: Well, I don’t think—no, I don’t see Obama as being a transformational president in that sense, certainly not—.

ESCOBAR: You don’t agree with Colin Powell, then?

WEISBROT: Well, he might have been describing other senses in which he could be a transformational president, but I don’t see him coming out and saying, you know, we really have to change our entire policy towards Latin America. On the other hand, it may change, because, again, all the historical forces that are described are going in that direction. You do have advisers in Obama’s camp, influential ones, who recognize this reality. So they may just decide to accept it.

ESCOBAR: Do you see him revoking the embargo against Cuba?

WEISBROT: Most of US policy towards Latin America has not been focused on Cuba; it’s been—and especially the hostility—has been focused primarily against Venezuela. The whole strategy of the Bush administration has been to try and isolate Venezuela from its neighbors, and it’s backfired completely. In fact, what the United States has done through this strategy is succeeded in isolating itself. Venezuela has stronger than ever relationships with almost all South America. And I think you will even see—I wouldn’t be surprised to see Colombia and Peru, you know, the ones that are closest to the US in South America, joining the Bank of the South at a future date. And after all, they voted with all the other countries at UNASUR—they took the side of Bolivia and not the United States after Bolivia expelled the US ambassador. So that was unanimous, and it included Colombia and Peru. So this is the way the region is moving.

"That one" moment reveals McCain’s dark side