As US Fuels War Crimes in Yemen, House Says US Involvement is Unauthorized

Overwhelming support for the nonbinding resolution, which passed the House 366-30, shows opposition to Saudi Arabia's war in Yemen is growing, but more pressure is needed to stop U.S. involvement, explains economist Mark Weisbrot of CEPR

Overwhelming support for the nonbinding resolution, which passed the House 366-30, shows opposition to Saudi Arabia's war in Yemen is growing, but more pressure is needed to stop U.S. involvement, explains economist Mark Weisbrot of CEPR 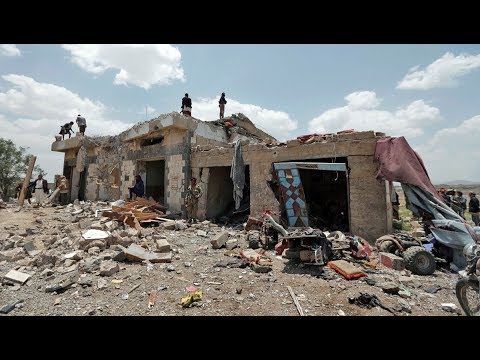 SHARMINI PERIES: It’s The Real News Network. I’m Sharmini Peries coming to you from Baltimore. The humanitarian catastrophe in Yemen is getting increasingly dire every day. On Thursday, the directors of the World Health Organization, WHO, the United Nations Children’s Fund, the UNICEF, and the World Food Program issued a joint statement urging Saudi Arabia to lift its blockade on Yemen. Last Monday, the House of Representatives passed a non-binding resolution with a vote of 366 to 30 calling attention to the U.S.’s unauthorized role in the war in Yemen. The ongoing Saudi war in Yemen has already killed over 10,000 Yemenis. Another 50,000 children could die before the end of the year from starvation according to the organization Save the Children.

Also, about 20 million Yemenis are in the need of humanitarian assistance and over 900,000 have been infected by cholera, the largest such outbreak the world has seen in decades. Joining me now to discuss the U.S. involvement in the war in Yemen is Mark Weisbrot. Mark is the co-director of the Center for Economic Policy and Research and is the author of Failed What the Experts Got Wrong About the Global Economy. He’s also president of Just Foreign Policy. He joins us today from Washington, D.C. Mark, good to have you back.

MARK WEISBROT: Well, it was intended to do that. However, the sponsors of the resolution were unable to do that because the Republicans were able to use the Rules Committee to block them from doing that, so they ended up as a compromise, a non-binding resolution. It doesn’t actually cut off the U.S. role, involvement in the war, which is refueling the Saudi planes and helping them target bombing targets with intelligence and so on. What it did do though was two very important things. One, is that they had a little bit of a debate for the first time in the House, and they had also, they were able to force the U.S. military to admit their role there. Then, the resolution declares that that role is unauthorized.

Those were two really big things, and it was as big step towards cutting off this aid. I think the reason that the Republicans agreed to this … As you mentioned, there was an overwhelming vote, was because they really don’t want a full and open debate. They don’t want this to become a real political and possibly electoral issue, I mean a big issue. That’s what they’re afraid of because it’s completely indefensible. That’s very important I think. The details are kind of important for people to know because there’s a real chance of stopping this terrible war, the worst humanitarian crisis in the world.

SHARMINI PERIES: By adopting this resolution so quickly, which is non-binding from what I understand, this essentially stopped debate and discussion in Congress about this.

MARK WEISBROT: Well, no, because the next step is going to go to the Senate. In the Senate, somebody’s going to introduce a companion resolution, and then they’ll have another fight over this. This has set the stage for that, and that’s very important. The Senate is closer. For example, there was a vote in June on cutting off some of the arms sales through Saudi Arabia and it only failed by a margin of 53 to 47, and there were five Democrats who voted the wrong way. If you could get four of them to switch and you could even pick up, there are Republicans you could pick up like Flake and Corker for example who have been very critical of the Trump administration, extremely vocal. It is possible to have the binding resolution in the Senate.

SHARMINI PERIES: Now, Mark, so we sell arms to Saudi Arabia. We are providing logistical support, which is things like on-air fueling of the airplanes that are bombing Yemen. We also assisting them in terms of targeted bombings and creating this enormous humanitarian crisis in Yemen. Why is this resolution non-binding?

MARK WEISBROT: Well, that’s because they didn’t have enough power in this last week to force the binding resolution. I mean, theoretically, they could have come back over and over again. I think that’s what the Republicans were afraid of, so they reached this compromise in order to get something fast so then they could move on to the Senate. Also, to get it on the record that what the U.S. was really doing there, and that is was unauthorized. You do see some media responses. For example, this week the New York Times had an editorial from its Editorial Board saying that the Saudis were trying to starve Yemen into submission, calling it a war crime and specifying that the U.S. was involved in this war crime. This is something I’ve never seen in the New York Times where the New York Times Editorial Board to say, and I’m pretty sure it’s never happened before. That the U.S. was actually involved, militarily involved in the perpetration of wars crimes while it’s actually happening.

There’s a lot of opposition building. There’s opposition in Congress, and I think this is the way this war is going to end. I emphasize it’s not just because I care about this a lot, but also because historically this is pretty much the main way that foreign policy has been changed. In 2013, you remember when the Congress wouldn’t vote for President Obama’s attempt to bomb Syria. You can go back to the 1980s when the Congress cut off aid to the Contras in Nicaragua. These are the times when you can actually change something. This shows, really it’s amazing, because this is a House of Representatives that’s controlled by the Republicans and still they were able to force this vote and force the military through the hearings to admit what they were doing, and then to push it. Now they’re going to push it further in the Senate.

If people contact their members of Congress and especially their senators now, the members of Congress can also and are going to be trying to persuade the senators, so both of them. I think that could really be the beginning of the end of this war. It’s really urgent, you know, because as you mentioned the humanitarian groups, the UN are saying that really millions of people are at risk and people are dying there every day.

SHARMINI PERIES: Now, if the United Nations and so many agencies within the United Nations has come out berating Saudi Arabia for this blockade and not allowing humanitarian aid, stopping the landing of aid, cargo from arriving in Yemen, and if members of Congress are so opposed to the U.S. support for Saudi war in Yemen as the vote we discussed reflects, 366 to 30, why not stop it by invoking the War Powers Act, and how could that unfold in Congress?

MARK WEISBROT: Well, I think the next place it could unfold is in the Senate, it will be the same strategy, using the War Powers Resolution to force a debate and vote. That’s a debate where in the Senate it’s closer as I mentioned. It could be cut off. I think it’s become much more urgent in the last couple weeks, even more. It was always terribly urgent because as you mentioned, 900,000 people have gotten cholera and now you’re … they’re cutting off, in the last two weeks, they’re cutting off supplies again. Hodeida, which is the port that gets something like 80% of the imports is now blockaded by the Saudi-led coalition again with U.S. help. Food is running short, medicine, supplies. Food prices have skyrocketed because of the cut off in supplies. More people are being malnourished and pushed to the brink of starvation. There’s 7 million people according to the UN that are on the brink of famine right now.

SHARMINI PERIES: Right. Mark, this issue just begs the question: Why isn’t Senate acting more quickly on this? And if they did invoke their powers and act on this, that just means that they will stop providing logistical support, not necessarily stop selling arms to the Saudis. I imagine the military industrial lobby in Congress is pretty heavy, has a lot to do with why this resolution isn’t binding, has a lot to do with why Congress isn’t invoking the War Powers Act.

MARK WEISBROT: Well, a lot of it is even more than the arms industry. It’s the Trump administration and their geostrategic holds in the region. They’re saying that the people that they’re bombing are the insurgents they’re trying to defeats. The Houthis are aligned with Iran, and they are … so of course they’re getting aid from Iran, so they’re portraying and they’re going to do that when it comes to the Senate as a fight against Iran and Irani interference even thought it’s an indigenous group. For them, it’s a power struggle, and for the Saudis too. The Saudis want the U.S. to intervene, to reassert the dominance of Israel and Saudi Arabia in the Middle East against Iran. That’s the real power struggle going on, and that’s why there really has to be a negotiated solution. I think if the U.S. does cut off its refueling and targeting aid, the Saudis could be forced to the negotiating table.

SHARMINI PERIES: If it is what you say, which is partly to prop up Saudi Arabia in the region as the region of power as opposed to Iran, does the administration have the right to go about doing that at the cost of this kind of humanitarian disaster?

MARK WEISBROT: Of course, there’s no right to do any of this stuff. These are, as the New York Times said, these are actual war crimes. They are literally starving the whole population to force the people that they’re opposing to give in. Of course, it’s illegal under international law, but it’s horrific. As I said, it’s the worst humanitarian crisis in the world, and this is one of the ways we can stop it. Unfortunately, it hasn’t gotten the attention that it deserves in the U.S., in the media overall internationally, but it’s getting a lot more. Again, if people, all these groups, you know there’s a lot of groups been working on this. The peace groups, the anti-war groups, the humanitarian groups. Groups like Code Pink, Win Without War, the Friends Committee on National Legislation. People can contact any of these groups and in terms of how they influence their members of Congress. This is I think the best hope of putting an end to this war before thousands and potentially hundreds of thousands and millions of people die as a result.

SHARMINI PERIES: Mark, thank you so much for joining us and bringing us this resolution to light for discussion.

SHARMINI PERIES: Thank you for joining us here The Real News Network.