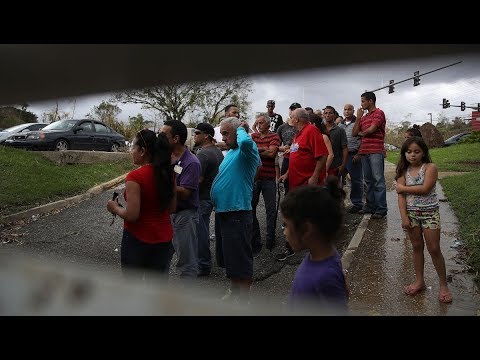 AARON MATÉ: It’s the Real News, I’m Arron Maté. More than a week after Hurricane Maria hit Puerto Rico vital aid is still failing to reach those in need. President Trump and other top U.S. officials have touted their response but the stories coming out of the island tell a much different story. Joining me to discuss what the U.S. government could do to help Puerto Rico is Mark Weisbrot, co-director of the Center for Economic and Policy Research. Welcome, Mark.

The picture coming out of the island is still very dire nine days later. It’s widely known that this island needs desperate aid but let’s talk about the economic aspect. Your group has called for economic help to Puerto Rico on top of the aid that it needs. Can you explain what you think the U.S. government should be doing?

MARK WEISBROT: Well, most immediately they do have to do something. There’s very urgent needs, there’s 40% of the people don’t have electricity, the majority of the people actually don’t have electricity while 40% don’t have access to clean water. Those are the most urgent needs. There’s, on Wednesday, 45 members of the House of Representatives sent a letter to the administration saying that they should employ the military, the Department of Defense resources, especially aircraft and helicopters because a lot of areas can only be reached by that. They also have engineering capabilities to basically get these most urgent needs. You have hospitals that are closed, operating rooms that can’t be used for lack of access of medical supplies and so it’s a very desperate situation that they have to fix. I think that’s the most urgent thing right now.

As you mentioned on the economic aspect, the problem is that it was already a terrible mess before these hurricanes hit. That’s I think what people don’t know as much about. By the way, Puerto Rico is entitled to … It’s really treated very badly in a lot of ways, and we can get into that but it does have under U.S. law, it is eligible for the same disaster relief that Texas or Florida or Louisiana or anybody else would get. They are supposed to do this, they are supposed to provide the same kind of disaster relief and they’ve moving way too slow and it’s been really inadequate and that’s the most urgent thing right now.

Getting back to the economy and the underlying problems that have lead to this mess, why did they lose their electricity? When the first hurricane came through it didn’t even hit the island, the first one just brushed it and all their power went out. That’s because their infrastructure’s been decaying for 10 years and now you have, in the last year or so, the U.S. government, the Congress and the President, it was under Obama, they created this financial oversight board which is going to push … Their austerity is guaranteeing that this economy can’t recover. Even if they recover from the hurricane they’re not going to recover.

They’ve had a lost decade, they’ve had negative growth for more than 10 years already. If they actually implement the plan that they oversight board appointed by the President and the U.S. Congress, the U.S. President, the U.S. Congress appointed, that’s going to guarantee another decade beyond that. You’re talking about 25 years, which is very unusual in the world, of a country having no growth, increasing unemployment, increasing poverty, and increasing of migration which they’ve lost 10% of their population over the last decade and it’s been accelerating. The rate has gone twice as fast in the last couple years and you can imagine what it’s going to be like after the hurricane.

AARON MATÉ: Right, Mark, so just to explain. This control board was appointed to deal with Puerto Rico’s $72 billion in debt and the connection there to the infrastructure is that instead of investing in its infrastructure like the grid Puerto Rico has been forced to pay off its bond holders. Let me ask you one question. Do we even know what the $72 billion in debt that Puerto Rico is said to owe actually is? How there been a proper audit of it?

MARK WEISBROT: Yeah, we know what the debt is and it’s a little complicated because it’s owed to all different creditors and from different government entities inside Puerto Rico but they’re not even going to be able to pay that. Even if they followed the whole oversight plan, which the creditors rejected by the way, they didn’t accept it because they wanted actually more. They were only going to get, even squeezing the country, cutting healthcare, cutting pensions and forcing a permanent depression, I’m not even exaggerating on the economy, they were still only going to get $7.9 billion out of the $74 billion so it’s unpayable.

That’s the first thing that’s going to have to happen is the oversight board and the U.S. government and the creditors are going to have to recommend is that debt cannot be paid. Now, what combination of debt cancellation versus restructuring and postponement, that can be debated but they can’t pay this and they can’t go through interminable recession in order to try and do something that’s impossible. By the way, they already have 11.7% unemployment, which is twice, two and a half times the rate of the United States and they’ve got three times the child poverty rate. They’re already suffering pretty badly, again, with the cuts of pensions and healthcare and education.

MARK WEISBROT: Yes, and they can’t pay it and it’s already … As I said, the oversight board’s plan has been rejected by the bondholder so currently Puerto Rico is in court with the creditors who are trying to get more and that’s going to … That of course injects more uncertainty into the outcome. Again, even aside from the hurricane reconstruction, we’re looking at probably 25 years or more or an economy that is set to worsen and it’s already pretty bad. These problems have to be resolved and part of the problem is that Puerto Rico is essentially a colony. They have, the residents are U.S. citizens and they have a lot of the obligations of U.S. citizens, they can be drafted, for example. They pay certain taxes like for Medicare and they don’t have any representation, voting representation in the U.S. Congress.

That’s the problem, they are just … The U.S. government can do, they’re really at the mercy of whatever the U.S. government does to them. Most of the things, and I know we probably won’t have time to talk about it, most of the things that lead to this debt crisis were really decisions that were made by the United States, many with international treaties, that affected their economy and that they can’t really deal with given their dysfunctional political status.

AARON MATÉ: Mark Weisbrot, co-director of the Center for Economic and Policy Research. Thank you.