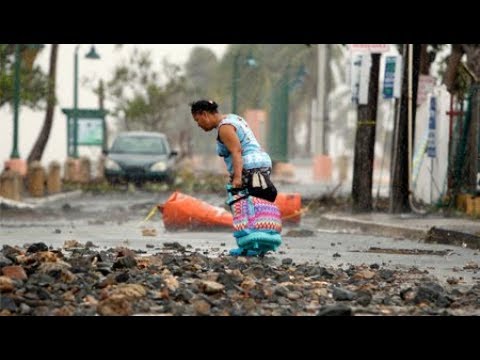 SHARMINI PERIES: It’s the Real News Network. I’m Sharmini Peries coming to you from Baltimore. Hurricane Irma passed over Puerto Rico on Wednesday, causing widespread damage and power outages. The hurricane could not have hit Puerto Rico at a worse time, because it is already suffering from massive economic crisis. Last June its citizens voted in favor of statehood, hoping to gain some degree of self-determination and economic assistance. At the moment however, there is no relief of economic situation that will only get worse in the coming months. Joining us now to analyze Puerto Rico’s dire economic crisis is Mark Weisbrot. Mark recently published an op-ed article in the New York Times with the headline Strangling Puerto Rice in Order to Save It. Mark is the Co-Director of the Center for Economic and Policy Research. His most recent book is Failed: What Experts Got Wrong About the Global Economy. Thanks for joining us again, Mark.

MARK WEISBROT: Thank you, Sharmini, for inviting me.

SHARMINI PERIES: Mark, in your New York Times article you compare the economic crisis in Puerto Rico to the one in Greece. Compare the debt levels of each of these economies and how do they measure, and how do they plan to overcome it?

MARK WEISBROT: Well they’re both very clearly unsustainable debt, Puerto Rico more than Greece. But Puerto Rico’s not getting even the kind of, well, hasn’t had the debt relief even that Greece has had. And it doesn’t have IMF loans, or anything like that, either. In fact, it’s much worse because they’ve already suffered a lost decade. And then the oversight board that President Obama appointed last year, which came up with a plan for Puerto Rico. If the plan goes as it’s supposed to Puerto Rico will have another lost decade. And it’s even worse than that, because they didn’t take into account the effect of the austerity measures on the economy going forward. And they’re also not taking into account that the creditors, including hedge funds, are already suing the government because they’re only going to get a fraction of their debt under the plan. And so that, too, will create further instability. So you’re talking about really indefinite stagnation for Puerto Rico. That’s the future they’re looking at right now unless something drastic changes.

SHARMINI PERIES: Now, members of Congress as well as President Trump have expressed a strong opposing position in terms of the debt relief for Puerto Rico. They generally present the problem as something that was self-inflicted by Puerto Rico, and that it must thus overcome the crisis on its own. What’s your response to this type of approach?

MARK WEISBROT: Well first of all it’s impossible, they have $73 billion of debt. And this austerity plan over the next 10 years, which really squeezes the country with massive cuts in spending, and healthcare, and everything else, and education, their electricity system, as you can see from this latest hurricane, has already been knocked out, the majority of it on the island. It’s a terrible mess, and even with all of that, the creditors would only get about $7.9 billion of the $73 billion. So there’s just no way, they can’t pay it. This is an impossible thing, and it would never happen if it weren’t for Puerto Rico’s colonial status. It’s technically an unincorporated territory of the United States. So they don’t have control over their most important economic policies.

If they were an independent country, for example, this could never happen. They would default on their debt like Argentina did back in the beginning of 2001, and then they would have a chance to return to growth. This is the kind of thing that only happens when a country really just has no control over its macroeconomic policies, and other policies. And of course, part of the reason they’re in the mess in the first place is because they were hit by a number of external shocks since the ‘90s that were not of their own making. They were results of decisions that were made by the U.S. government or by the result of international treaties that the U.S. negotiated. Like the WTO for example, they didn’t have a voice in and they couldn’t really adapt to without having, again, control over their economic policies.

SHARMINI PERIES: Right, and as you just said, there’s been a history here in terms of what has driven them into this kind of a crisis. And on top of that, we have a management system imposed on them that isn’t working. And then now we have this Hurricane Irma which has hit the region, and things are going to be obviously very bad for Puerto Rico, they’ll be worse off. What do you think, given all of these situations, what can be done in order for Puerto Rico to be lift out of the crisis it’s in? This is ideally, of course, but if you had the chance to talk to those who make those decisions around Puerto Rico, what would you be saying to them?

MARK WEISBROT: Well, they’d have to have a debt relief and a debt restructuring. So something like Argentina had after they defaulted, for example, that postponed their interest in principle payments. So that they could first recover economically, which they did, they grew nearly 60% in six years. Puerto Rico, again, is projected to shrink for decades. This is very rare, actually, to have this kind of prolonged economic decline. And it’s only a result of creditors trying to squeeze more out of the country than is possible even if the country wanted to pay everything and suffer. It’s just not even possible, so that would be the first thing.

And then they would need some kind of fiscal stimulus to get the economy going at first, and then over time they could pay, ironically they could probably pay more than the $7.9 billion that they’re being squeezed for now if they were allowed to return to growth. But right now this board was appointed by President Obama, it’s not representative of any interest in Puerto Rico. And then you have the creditors, and you have a bankruptcy-like proceeding right now even though they can’t have actual bankruptcy. So you have all of these forces just trying to squeeze them, trying to get their piece of whatever is going to be left. And nobody looking out for whether the island can recover.

And it’s really terrible, already they’ve got 46% poverty, 58% child poverty, which is almost three times the level of the United States. Their unemployment is 11.7%, more than two-and-a-half times what the unemployment is in the United States. Investment has fallen from around 20% in 1999 to about 7.9% today. Any indicator you look at it’s horrible. And they get squeezed also because, and this is again a result of their colonial status, even though they pay Medicare taxes they’re not getting the same Medicare funding from the United States government that the states get. They don’t get anywhere near the Medicaid support, so they’ve got a real healthcare crisis because of that.

They got something to make up for that actually it was considerable from the Obamacare, but that was a one time payment, because the US is not obligated to include them in the Obamacare subsidy. So now they’re going to run into further crisis in healthcare in addition to the austerity. So you’re talking about just a terrible collective punishment that is right now scheduled to go on for decades.

MARK WEISBROT: Well there’s nothing going on with it now and there’s nobody considering it in the U.S. government. So I mean the best you can say right now in terms of here is you do have some members of congress who were against the so called PROMESA Act. The act last year that established this financial oversight board that produced this terrible austerity plan, which, again, the creditors rejected because they didn’t get enough, from their opinion, out of it. So you had some resistance of that in congress, but not nearly enough at this point.

SHARMINI PERIES: All right Mark, we’ll keep an eye on this and hope to have you back. And if there’s any updates let us know.