On the border Pt8

Warschawski: The Middle East and the next decade - the unipolar world ends and economic crisis deepens

Warschawski: The Middle East and the next decade - the unipolar world ends and economic crisis deepens 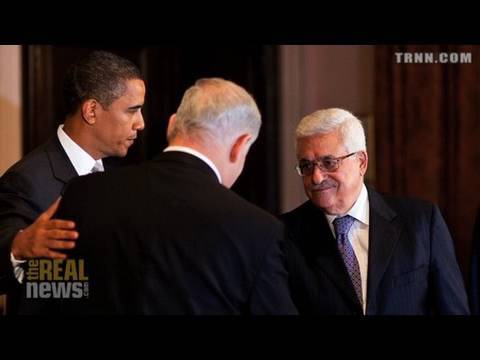 PAUL JAY, SENIOR EDITOR, TRNN: Welcome back to The Real News Network. I’m Paul Jay in Jerusalem. We’re joined again now by Michel Warschawski. He’s the author of On the Border, founder of Alternative Information Center in Jerusalem. Thanks for joining us again. So what’s next? We’re looking at probably a deeper economic crisis over the next decade, a continued strengthening of China, more aggressive rhetoric, at the very least, between Russia and the United States, if not more. What’s all this mean for Israel, the Palestinians, and the region?

MICHEL WARSCHAWSKI, FOUNDER, ALTERNATIVE INFORMATION CENTER: I don’t think anyone intelligent will try to give an answer, because of these two factors, the first being apparently a very deep and long economic crisis, which will change a lot of things, changing the military budget in the United States, to start with, a less important and maybe pushing [inaudible] to open new opportunities. And the second is that we have been living for most of last century, the second half of the last century, in a bipolar world. Then we have a very short period of the United States being the only power. And the neoconservative strategy build on that, which is already finished. Now we’ll have four-powers or maybe five-powers world, which will change completely the rules of the game. During the last decade, especially during the new neoconservative, but even before, the game was competition: who will ["gut"] more support and who will prove itself as a more efficient ally for The United States, Israel, Israel with the Arabs, the Arabs without Israel, and this competition between most of the Arab countries and Israel on the American hegemony support. This will definitely not be the case in the years to come. But a competition between big powers, and China will be a power in this that has—China has not played any substantial role in this, political role in this area, but it will.

JAY: Except they’re beginning to—you can see the shape of things to come with the role they play in Iran, where Iran has an option now.

WARSCHAWSKI: Of course, of course. And Russia, who, during the neoconservative, look like a disappearing big power, becoming some kind of new American colony or something of that kind, it’s not anymore the case. Russia intends to play a big-power role, and is playing already a role in the area. And even India is becoming a big power. So I wouldn’t try to foresee what will be the next decade, and certainly not the decade after. It will be another world, because of the economical crisis on the one hand, and because it will be a multipolar game and not a mono-unique American playground.

JAY: In Israel the economic elite, as opposed to the political elite, has a lot at stake. And I assume they’re not monolithic in terms of their politics. You have divergences. But they have to be looking ahead and seeing that this radical right is not going to be in their long-term interests here. But what’s the relationship here?

WARSCHAWSKI: I think we have had this three—we are in the third phase of the Israeli capital. The first stage was putting the emphasis on the colonial process, while economical interests, private economic interests, were totally marginal, were marginal. Most of the ownership was state and union ownership motivated by national interests: what was useful to build a Jewish state? Private interests were secondary. Then we have a second stage with the development of private capital and the development of capital, private or not private, as a goal in itself, giving the priority or looking at the natural space for economic expansion in the Arab world. This was the Oslo framework; this is the Shimon Perez-famous "new Middle East". Israel will export its computers, its technology to the Arab world, which was in fact a modernization of the old dream of Zionism: we will make the desert flourish with our orange trees. Now we’ll make the Arab desert flourish with our computers and our technologies and know-how. But this is also quite a short period; this was the period of Oslo. Now the Israeli capital is totally globalized. I was in Mumbai to see, and reading the newspapers there, the power of Israeli companies there, the presence of Israeli companies in a city which is bigger in population than—Jordan plus Israel plus Palestine plus Lebanon is not Mumbai, even, population. But the presence in the newspaper of Israeli companies, Israel interests, Israeli investments make you believe that this is a huge, big power, economical big power. And it is an international economic power, but a power which, unlike the previous period, where peace was needed to have the Israeli investment developed in the Middle East—and this is why Shimon Perez was advocating peace, and peace with the Palestinians, as a way to reach peace, more important peace, with Arab world—today peace is not necessary, and certainly not resolving the Palestinian issue, in order to have Israeli capital making big profits in India, in China, in all over the world.

JAY: So one can see, potentially, even a more serious divergence of interests, then. Israeli politics moves further to the right, more radically right; Israeli capital looks abroad. But the United States increasingly worries about losing influence in the Arab world. China, Russia, Iran has alternatives. Soon—who knows?—maybe the Sauds will think they also have some alternatives, which puts the United States and Israel on different train tracks.

WARSCHAWSKI: Not in the short term, but definitely in the longer term, yes. And Obama, who is an intelligent president, he’s understanding it. So I don’t expect in the near future real pressures on Israel, because it needs also a change of all the military strategy in the area to have an alternative to offer. But I do think that there will be more and more messages and stronger and stronger messages that this cannot go on. And there will be more than that, I think. The same way Benjamin Netanyahu is trying to destabilize, together with his neoconservative friends, Obama and to end his—democratically, but maybe not, maybe not democratically—to end his government, his administration, Obama is trying, for sure, to destabilize Netanyahu and to try. The problem with Obama—and this is the first time in the last 30 years that there is no game government and opposition. There is no opposition.

WARSCHAWSKI: In Israel. So you cannot [do] as Bush the father did, to promote the alternative to Shamir government at that time. And this is the main problem. But I think it will be one of the targets of the present American administration. The fact that J Street was endorsed by the White House, the fact that in opposition to the Israeli demand, senior US officials went to and are going to J Street initiatives, dinners, and so on and so on, show that they want a lever to try to put pressure on the Israeli government in the American Jewish public opinion and inside Israel. I know, from Peace Now leaders, Peace Now was a main tool. I don’t think Peace Now was a tool in itself. It was a genuine expression of a movement in Israel, but well understood by the American administration as a pressure on the Israeli government, and highly financed, indirectly, by the US. The right wing used to say it, and it is true. They need—it was a lobby for [inaudible] an American lobby on Israel, the same way Israel has its own lobbies on the American administration. Now, I know from Peace Now leaders that there are a lot of demands somehow coming awake: we need you, we need you to stop his government, and to replace it, ultimately. Now, the one who lost his opportunity, as always, is Ehud Barak. Ehud Barak, if he wouldn’t have commit suicide and kill his own party, would have been today the golden opportunity for the American to replace Netanyahu and his neoconservatives. But he’s the tail of the government. He is in the government, part of the government policy, and has no party anymore.

JAY: And killed his party by joining Netanyahu’s government.

WARSCHAWSKI: Even killing it before, but now definitely.

WARSCHAWSKI: And certainly not in the near future. I don’t think it’s on me to give the answer, as an Israeli, but definitely I will endorse what many of my Palestinian friends say: there is a need of a—I said it before, but of reshaping the timeframe, and therefore the strategy, but not without the timeframe.

WARSCHAWSKI: Urgency, but also a readiness, to have, to understand that the frame of the two-state solution, as presented by Yasser Arafat 15 years ago, it doesn’t exist anymore. It doesn’t exist anymore. It’s not whether it’s good or bad. It’s not the same world. Maybe it will be, but right now it is not. And, therefore, a strategy—I am among those who think that right now it’s not a strategy of liberation; it’s a strategy of resistance. No solution. Even Palestinian prime minister, Mr. Fayyad, is aware of this reality, maybe because these are technocrats more than a nationalist leader like previous ones, even like Abu Mazen, like Mahmoud Abbas. He said our priority is to build ourself. And he has less problem, maybe, than [inaudible] to get rid or to push aside the nationalist, triumphalist terminology—we will liberate Palestine, we will liberate Jerusalem. He said let’s build ourself, out of an understanding that what was relevant or seemed to be relevant in the late ’80s or in the ’90s is not relevant anymore. And therefore, changing priority—and this is what the Palestinians, I think, are working on, from top to bottom, how, often spontaneously, on the level of popular movements, popular committees—. In many, many villages now you have popular committees struggling on very local and concrete issues. You have many NGOs or movements dealing with strengthening and improving their society before the liberation. And I don’t think it’s a bad thing. Sometimes you have to replace, as a visible object, liberation by resistance, to understand it’s still a phase of resistance, not yet a phase of liberation. It can come quickly and the Palestinians will readjust. Right now, priority is resistance.

JAY: Thanks for joining us. And thank you for joining us on The Real News Network. And if you like these interviews, remember the Donate button is over here, or you can text 85944, if you’re in the United States, the word "news" and send us five bucks.