On the border Pt.4

M. Warschawski: The Wall is a symbol of a philosophy that seeks a state as ethnically pure as possible

M. Warschawski: The Wall is a symbol of a philosophy that seeks a state as ethnically pure as possible 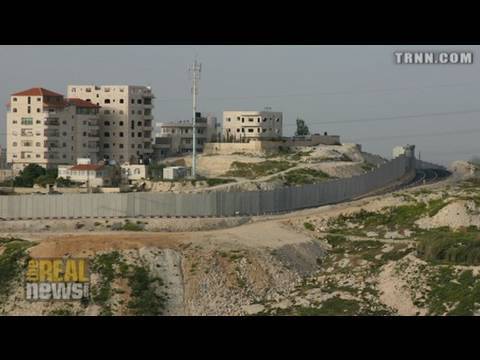 PAUL JAY, SENIOR EDITOR, TRNN: Welcome back to The Real News Network. I’m Paul Jay, and we’re in Jerusalem. Michel Warschawski, author of On the Border, writes in his introduction, he quotes the former prime minister Ehud Barak. We are in a villa in the heart of the jungle, says Barak, the man principally responsible for the failure of the Oslo peace process. This description of Israel and its surrounds is a summary of the political philosophy that sees the Arab world and the Palestinians not as enemies to be fought with everything in one’s power until sooner or later one can negotiate with them, make peace, and reconcile, but rather as an existential threat, ferocious beasts, barbarians. In the face of such a threat, the very idea of negotiations becomes absurd, for only permanent preventative and total war can try to subdue the threat of the jungle. If history can still teach us anything at all, then indeed this outlook has little chance of success. Now joining us is Michel Warschawski. Thanks for joining us again.

JAY: So this image of Israel as a villa in the jungle, surrounded now with a wall, talk about this.

WARSCHAWSKI: The wall is the ultimate physical expression of something much deeper, which is the philosophy of separation. Deep entrenched in the Zionist ideology is the idea that only homogeneity is normality. This is not an invention of Zionism. At the turn of the 20th century it was very common to create states as ethnically pure as possible from the collapse of the big empires—a state for the Czech, state for the Slovens, state for the Greeks, and a state for the Jews. Why not? This was the ideal of Zionism: if everyone has his own ethnic state, we want to have ours, Palestine becoming at a certain stage the only place to have it. But the idea was first of all to have our state for us, even in Uganda, maybe. Now, in that sense, separation is a supreme value of the Israeli culture, not only separation from the Arabs, in fact. You look how our cities are shaped, each community trying to be separate from the other, religious from nonreligious. This neighborhood was a Kurdish neighborhood.

WARSCHAWSKI: Where we are now. It’s a conception which is exactly the exact opposite of the French conception of citizenship. It’s multiculturalism to its ultimate caricature, in fact. Now, the wall is only a physical tool to express this kind of separation. This is why it is so popular. There is almost a consensus in Israel in support of the wall. There would be an argument whether it should be on the Green Line or where it is now, but the idea that something should really separate Jews and Arabs, Israelis and Palestinians, is consensual. We shouldn’t mix. We are not against them, but they should remain where they are and we where we are. And the internal debate in Israel is not in the philosophy of separation but where to separate and how to separate [inaudible] mostly by negotiation, but to do it unilaterally by force, by a wall or not by a wall. But I would say in that sense the wall is [inaudible] what is behind the wall. And this popularity of the wall, because it symbolizes and expresses physically separation, this is our main challenge.

JAY: Now, it’s called the security wall. The understanding of it outside Israel is the wall is supposed to protect Israelis from Palestinian suicide bombers and things like this. It’s not for that?

WARSCHAWSKI: Of course it is perceived as a security element. Something which has yet to be proven is what—and it’s true that in the last years we have had very few military actions and terrorist actions inside Israel, but there could be two reasons: maybe the efficiency of the wall; maybe (and it’s not a small factor) the unilateral decision of Hamas to stop these activities.

JAY: Which in fact is what happened.

WARSCHAWSKI: And they had the ability to stop it. Like in physics, when you have two variables you don’t know, you need another formula in order to know what is really the reason.

JAY: I’m told there are sections of the wall that are actually broken down that have not been repaired and people walk over. Is this the case?

WARSCHAWSKI: It’s very easy. And I’m not a military expert, I am not a scout of the Palestinians, but I can make it across the wall in ten places. And the one who are more operational would give you ten more.

JAY: So if that’s the case, then it’s really to stop ordinary people from going back and forth.

WARSCHAWSKI: Of course. The victims of the wall are not—although maybe [inaudible] could be more difficult, are not the one who are ready to sacrifice their life and to explode themselves in Jerusalem or in Tel Aviv. There we find the ways. But the day-to-day lives, the families, the Palestinian man or woman who wants to visit his parents on the other side of the wall, agricultural peasants who want to go to their field that is on the other side of the wall, the wall has [inaudible] intentional policy of dismantling, I would say, the Palestinian body. It was done before the wall. You need only four checkpoints to isolate each Palestinian canton. This was the Ariel Sharon plan, the cantonization of the Palestinian, each canton one from the other, which is much more severe and have much more negative implications as the wall itself.

JAY: But is that part of what the wall is about is, you know, given that if the international community insists, and even you could say Israel’s self-image insists, that Palestinian Israelis have to have a vote, you can deal with it, as long as you’re sure it’s a minority vote.

WARSCHAWSKI: Of course. And this is a problem of those parties and leaders, Israeli leaders, who claim greater Israel, who want it as great as possible, Israel, but as a Jewish state, and Jewish in the demographic sense of the term, not with a Jewish identity, Jewish culture, or Hebrew language, but a state of Jews, and, as possible, as Jews only. So Israel can keep—in their own conception can remain a Jewish state as long as the non-Jews are an acceptable minority. It was never said how many, but it couldn’t be more than 30 percent somehow. More than 30 percent, we are already in a binational reality. So this is why even on the right wing very few will challenge that they should have their own something, state or cantons, because we don’t want to mix, because we want to keep it as a demographically Jewish state.

JAY: When former prime minister Olmert left office, there was a very interesting quote he gave, where he said that Israel needs a two-state solution to keep a Jewish state, because you can’t have occupation go on forever until the international community says, if you’re going to occupy these people forever, then you’re going to have to give them the vote, and once they have the vote, that’s more or less the end of a Jewish state, which is a kind of pragmatic position that, if you want a Jewish state, makes sense. But have they kind of opened up the door to a kind of such ferocious right that won’t even accept the kind of pragmatic sense of that and doesn’t want to even go there, just wants occupation, and doesn’t give a damn what the international community wants or doesn’t want?

WARSCHAWSKI: That position was relatively marginal until recently, until the last four, five, or six years. Today we have a settlement in the Israeli government, even, that Avigdor Lieberman, who represents right wing, ready to confront international community, including the United States up to a certain point—or at least they are what I call the tail that moves the dog. And this is our philosophy. It’s not true—it was Sharon’s statement many years ago. It’s not true that always the dog, the American dog, is moving the Israeli tail; sometimes the tail can move the dog. And our position should be to create facts, which may even create some anger in Washington, certainly in the State Department, but ultimately they will have to cope with it.

JAY: Because strategically they need Israel in the Middle East.

WARSCHAWSKI: [inaudible] and they will not fight Israel. And to be with Arabs against Israel is out of question. There is a strong strategic alliance, not out of loving the Jews, but because of much bigger interests, oil in particular, a strategic place. And they know this alliance is here for a long time to be. And therefore it’s a matter of who will blink first in the relationship between United States. And we don’t have to accept everything. They have to take us into consideration.