On the border Pt.2

Report from the Middle East: What happened to the Israeli peace movement?

Report from the Middle East: What happened to the Israeli peace movement? 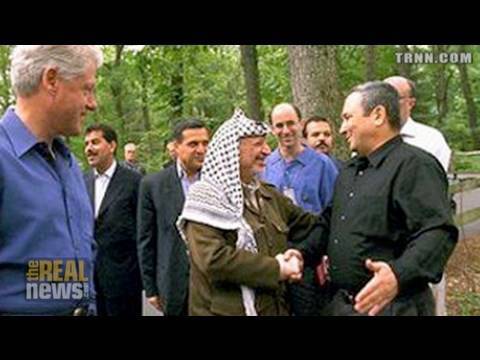 PAUL JAY, SENIOR EDITOR, TRNN: Welcome back to The Real News Network. I’m Paul Jay in Jerusalem. We’re joined again now by Michel Warschawski. He’s the founder of the Alternative Information Center in Jerusalem. He’s also the author of On the Border. Thanks for joining us again.

JAY: So what happened to the Israeli peace movement?

WARSCHAWSKI: It vanished. It vanished in one week, mid-August 2000, when Ehud Barak came back from the Camp David Summit with this big lie, a lie which he himself recognized that it was a big lie, that we have no partner, that he made very generous offers to Yasser Arafat, and he rejected everything, adding—and this was a killing sentence—he unmasked the real intentions of the Palestinian national movement. Behind negotiation, behind moderation, behind the Nobel Prize of Yasser Arafat, there is only one intention: to destroy Israel and to kick the Jews into the sea—back to the ’60s, ’70s kind of discourse of Golda Meir. This statement made the peace movement collapse in one week. I am not someone who has archives. But I don’t know. Somehow I felt unconsciously that this was a historical moment, and I kept all the newspaper of that weekend—no more, one weekend, all the clips—all under the titles "The left is asking forgiveness", "The left say no, never again", a picture of a right-wing activist and left-wing activist, peace now activist, saying, "Now we are brothers; we will never be naive again." This was—in few days, this movement, which was a mass movement able to mobilize hundreds of thousands of people against occupation, against war in Lebanon, against colonization, commit suicide, real suicide, and it didn’t recover until today.

WARSCHAWSKI: In fact, there was a beginning of a recovery after almost a year, and the beginning of articles, statements of peace movement leaders and left-wing politicians saying it was not the case and it’s not true and Arafat made new offers and we should renew the negotiations, but then came September 11. On September 11, the big lie of—if we want, September 11 prove post factum in the Israeli discourse that Barak was right. Maybe he was lying about Arafat. But globally speaking, we are confronted with a threat, which is not anymore even the Palestinians and Arafat. It’s much bigger than that. It’s Islam. And the discourse of clash of civilization has been deeply internalized by the Israeli discourse and the Israeli public, that we Israel are the front line defending not only ourself but so-called Judeo-Christian civilization against—not against the Palestinians only. They are only the front line of a much bigger threat, which is Islam, Islam fundamentalism. In fact, there was a shift in the discourse, starting with fighting terrorism—this was the main discourse at the end of the ’80s—then to Islamic terrorism, and then to Islam as such as a threat to—a civilizational threat.

JAY: And it goes to the very core of the conception of the Israeli—of a Jewish state, because if there wasn’t some kind of clash of civilizations, you wouldn’t need a Jewish [inaudible]

WARSCHAWSKI: Yes, but the Jewish state was a answer not to Islam but to European anti-Semitism.

JAY: That gets transferred.

WARSCHAWSKI: Exactly. It was transferred, it was relocated somehow. The frame remained the same; the enemy is different. And we became the ally, suddenly, of Christian civilization against the new threat.

JAY: When in fact it was that civilization that committed the worst crimes against Jews. So—.

WARSCHAWSKI: Of course, and that Jews in Islam never suffered anything like European anti-Semitism. And I don’t speak even about the Jewish genocide. I’m speaking about Middle Ages. There was no equality in the Arab world, in the Muslim world, because there was no equality at that time in no way for anyone. But there was real coexistence: whether in the Maghreb or Iraq or in Egypt, the history is a history of the community inside the Muslim world.

JAY: Now, in terms of a North American view of Israel, I think North American Jews particularly were a little surprised there wasn’t some kind of response after Gaza. Everyone was watching Gaza on television, and even amongst many North American Jews, I think, who consider themselves supporters of Israel, it gave them pause to stop. And people were kind of wondering, isn’t there going to be some reaction in Israel?

WARSCHAWSKI: Yeah, this was—I will confess a personal experience. It’s the first time during my decades of political activism I got depressed. I went to my bed for few days and I couldn’t go out. Not because of the horrors of Gaza. Unfortunately, we have witnessed such kind of horrors before, in Sabra and Shatila and other—in the first—in the second intifada, but because of the silence of my own friends, with whom I have been demonstrating in the ’80s and the ’90s. And suddenly these same decent Israelis were endorsing, without any question, the discourse, the official discourse that the war, the massacre of Gaza, was totally legitimate. I couldn’t bear it. I couldn’t understand it, and I couldn’t bear it.

JAY: And some of the same people you’re talking about, what is their attitude to the Goldstone Report that has described what took place in Gaza?

WARSCHAWSKI: What happened with the peace movement, the broad mainstream peace movement, men and women, has been since 2000. In the last decade they didn’t became rightist, right wingers, but quit political involvement. "It’s too difficult." "We do have a partner, but this is not the partner we wanted." They internalized their own betrayal somehow ten years ago, and the result has been a kind of demobilization. I don’t think there’s been a shift to pro-occupation, pro-settlement positions, but they have been definitely a kind of resignation.

JAY: One can see, I guess, something similar, this sort of you just tune out to what you don’t want to see. In the United States the antiwar movement, many people are surprised it’s not bigger over what happened in Iraq, and maybe a million people got killed by US policy in Iraq. But the antiwar movement never had that—none of the kind of momentum it had during Vietnam. You can see the same thing even in a place like Canada, where people choose not to look at what happens with the aboriginal people in Canada and the conditions they live in. I guess people just decide to be blind.

JAY: Although it’s more in your face here, I guess.

WARSCHAWSKI: No, here it’s a day-to-day question. In a couple of hours I will demonstrate, like every Friday, in front of one new Jewish settlement in Jerusalem, in Sheikh Jarrah. So you have the hardcore, yes. We will be a few hundred. But the mainstream that used to support and to maybe on the more moderate stand, but still they will not be there.