On the border Pt.1

Report from the Middle East: M. Warschawski on growing up in Jerusalem.

Report from the Middle East: M. Warschawski on growing up in Jerusalem. 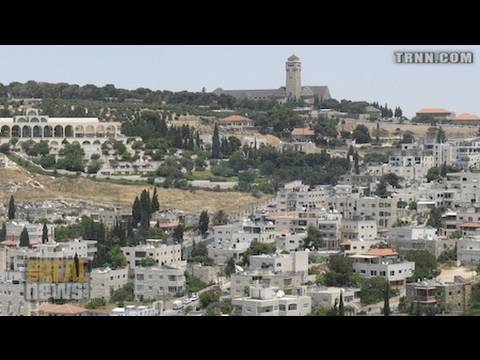 PAUL JAY, SENIOR EDITOR, TRNN: Welcome to The Real News Network. I’m Paul Jay. We’re in Jerusalem. Michel Warschawski has been a political activist for more than 45 years. He’s the author of the book On the Border. He’s been described as one of the more powerful voices in defense of Palestinian rights, critiquing Zionist government policy. He’s also been called the "lover of Israel". He’s been called all kinds of things, including called "Get into jail". Thanks for joining us. You grew up in an Orthodox Jewish family, and you’ve become quite a critic of Israeli policy. How did you get there?

MICHEL WARSCHAWSKI, JOURNALIST AND WRITER: I was born just after the war, World War II, from parents who spent the war in occupied France. My mother was a Jewish student, one of the very few Jewish students in Paris, and my father in the armed resistance. So all my childhood was somehow framed by the memories of the occupation. This was the most used concept at home during lunch and dinner—occupation, occupation, occupation; during occupation we will do that and then do that. And suddenly—and I remember exactly the date; I even have a picture—I was in Hebron a couple of weeks after the occupation of the West Bank, leading a group of pilgrims that came from from Strasbourg, where I was born, and we are negotiating with a merchant who could be the age of my father, maybe my grandfather. I suddenly looked at myself, speaking from above, and he was under. Now, this is a position which I never knew. On the contrary, all my history, my personal history, my memories or the memories of my family, that we were the one who were excluded, the one were victims, the one who were persecuted, and suddenly I was powerful. And it was simply unbearable. It has nothing to do with ideology.

JAY: The merchant was Palestinian.

WARSCHAWSKI: The merchant was Palestinian. And I remember I went to my father on the way back, and I said, "Daddy, but you know that there is an occupation, but this time we are the occupiers?" And my father say, "Yes, and it’s terrible, and let’s go and pray that it will finish very soon." And we went praying.

JAY: What year was this?

WARSCHAWSKI: Nineteen sixty-seven. It was at the end of June 1967, maybe at the beginning of July, a few weeks after the beginning of the occupation. So we pray that it will stop very quick. And now 45 years have passed, almost, and it’s still going on.

JAY: In terms of your religious orthodoxy of your family, did it take on a political conservatism? Or was there always a kind of complementary between the religious views and the antifascist views?

WARSCHAWSKI: I don’t think there is something called Judaism. There are many faces and many interpretation of Judaism. The kind of Judaism I was educated in included—we’ll call it the values of the French Revolution. It was part of our education—very strongly antiracist. Racism was something—because maybe Jews have been victims of racism, it was something we—since we were very, very young—. I remember one of the few slaps I got from my father was because one day at table I said "negro", and immediately, without thinking, [slapping gesture]. This was absolutely taboo, this kind of racist language and racist attitudes. So it was part of our education. There was no break between the education I got at home and my future political commitment—on the contrary. And many years later I was arrested, and there was a trial which was quite famous, and my father, still chief rabbi of Strasbourg, was interviewed by the local newspaper about how he relate to a son who is accused of being a terrorist or supporting terrorism.

WARSCHAWSKI: In Israel. And he said, "I’m very proud of my son and the values he’s fighting for. I regret only one thing, that he doesn’t do it with a kippah on his head."

JAY: What were you charged with and why?

WARSCHAWSKI: The Alternative Information Center, which I was the director of at that time, used to, and still today, to have strong relationship and political and personal relationship with Palestinian activists, mainly from the Palestinian left organizations, the PFLP in particular, the Popular Front for Liberation of Palestine. We were charged of providing services, printing services, to an illegal organization, which was the PFLP, by printing for them, for their women organization and their student organization, their small newspaper.

JAY: What year was that?

JAY: So what happened in the trial?

WARSCHAWSKI: I was arrested in February ’87. Most of the trial went on during ’88-’89, the years of the intifada. And, in fact, the trial became the trial of the intifada, which gave it a lot of publicity, because what we were doing, what we were accused of doing, became completely obsolete: thousands of Israelis started to cross the border—not as radical as we were—and these mainstream peace movement Israelis were looking for partners, for people to speak with, to exchange, to be active with. And suddenly what we were charged of looked completely banal, completely normal. And, in fact, it became every peace activist here in Jerusalem [inaudible] directly concerned, because what was on trial was what they were doing at the same moment.

JAY: The solidarity with Palestinians itself was on trial.

WARSCHAWSKI: Yeah, exactly. It was a trial of solidarity and a trial of crossing the border, refusing to be, as the chief interrogator of the Israeli secret services that was in charge of my file—and I was interrogated for a couple of weeks—said the following, and it’s a very important statement, in my opinion: "You have been active for decades now with extremely radical position, anti-Zionist and so on, and we left you alone. You never suffered any kind of harassment, except small harassment, really not very serious." "Yes, it’s true." "And you know why?" he asked me. "Because you are a Jew, and our role as Israeli ["sha-BAK"], Israeli secret services, is to protect any Jew to be free, to express his opinion, to organize demonstrations. This is our duty as—. But there," and then he pointed (I believe there was no window on the eastern direction) towards East Jerusalem, "there is no democracy. This is occupation. And we have a problem with you guys. What are you? Israelis or Palestinians? If you are Israelis, you will be protected by Israeli democracy. If you are Palestinians, you will be treated as any Palestinian, and there is no democracy, no freedom of expression, no freedom of publication, nothing." I said, "But we are both. What do you want? What can we do? We are both. And we sit exactly on the border, physically on the border." And as a joint Palestinian-Israeli organization, we say we don’t like gray areas. We know how to handle black and white. But no man’s land is a very dangerous place. Don’t stay there.

WARSCHAWSKI: He said. And I—this is why our trial was named often in the Israeli media "the trial of the border". And this is why later on I wrote this book On the Border.

WARSCHAWSKI: They changed the charges after—this was at the beginning, when they arrested me, when they submitted the charge sheet—it was not anymore supporting terrorist organizations (this was the original), but providing services to illegal organization, which was a little bit softer. But, still, it was up to 20 years prison, and I must confess that for a while I thought I will stay many, many years in prison, because we never denied the facts. We claimed that these facts are not illegal, and based on a Talmudic conception of the law, I said in the interrogation and in the trial, for me, what is not 100 forbidden is kosher. If it is clearly illegal—. But if you say no, this is borderline, borderline for me is what I should use, and to push the border of the law as much as possible—try not to cross the law, the border of the law. We didn’t make the choice to have illegal underground activities—this was our choice—but not to try to be far away from the border of the law, but the closest possible, and even, if possible, to push it. I was convicted for closing eyes, which was the lowest level of knowledge in the Israeli law, in international law. It is true that we didn’t collaborate with the PFLP, but we didn’t try to know too much who were these people, which was fine—it was exactly our claim. We are not the police. We are not the secret services. These organization have open activities. They even have an office, the women organization.

WARSCHAWSKI: Exactly. It was not the PFLP as such, but these kind of front organizations. And for us, [because] they have opened offices in East Jerusalem, they have legal demonstrations, they are kosher.

JAY: So what year were you convicted and go to jail?

WARSCHAWSKI: The trial started in ’87, and it ended in ’89. I was sentenced to 20 months in prison, which was something shocking. A friend of my wife was my lawyer, because they study law together. Was shocked. He didn’t expect it. We never expect it. We thought there will be a fine, no more. But the judges—and it was part of the verdict—say, "We have to warn everyone inside the Israeli peace movement who may be motivated"—it’s a quote—"by wonderful values, like the defendant; to warn them not to be too close to the border."