Musician and activist Serj Tankian continues his discussion with TRNN's Ben Norton, explaining how "rock music is the perfect form" to "push back against injustice." "I've always been a political person," Tankian says, "so for me music has always been an extension of that."

Musician and activist Serj Tankian continues his discussion with TRNN's Ben Norton, explaining how "rock music is the perfect form" to "push back against injustice." "I've always been a political person," Tankian says, "so for me music has always been an extension of that." 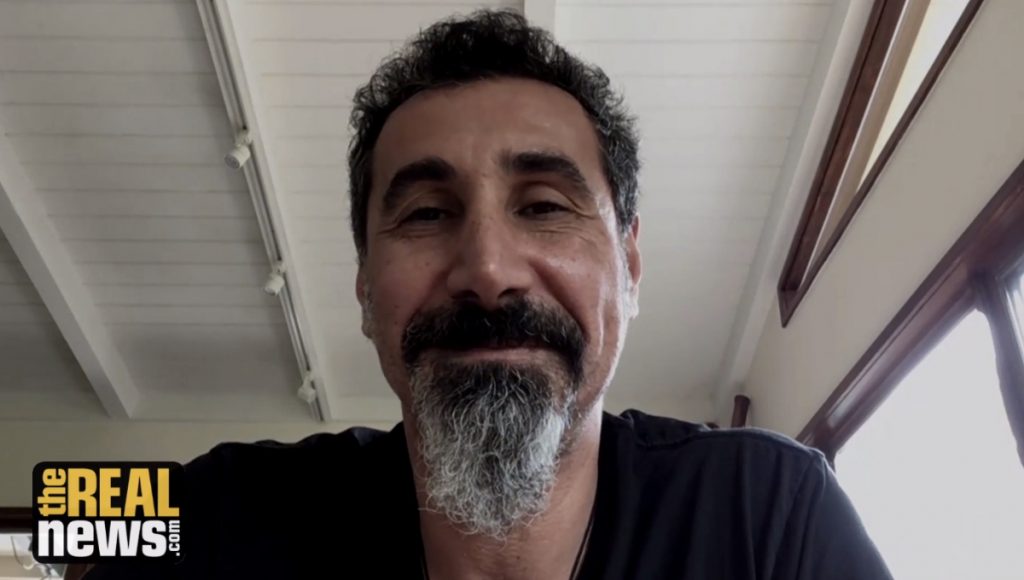 BEN NORTON: It’s The Real News, I’m Ben Norton. We are joined in the second part of our discussion here with Serj Tankian. Serj is an award-winning musician and composer. He is the vocalist of the band System of a Down and has released numerous solo albums as an artist under his name. In this second part, we are going to discuss Serj’s views on music and the role of the arts in politics. In part one, we discussed the protest movement in Armenia and Serj’s view of the massive social movement going on there. In this part, we’re going to be discussing the role that his music has played, as a solo artist and System of a Down, in other social movements, here in the U.S. and internationally.

I also want to talk a bit more about your music and the relationship of your music to politics — both your music as a solo artist and also in your band, System of a Down. You have been very politically outspoken for years, and not just involved in Armenian but also U.S. politics. You have written numerous antiwar songs, like “Boom!” and “B.Y.O.B.” You have songs about mass incarceration, like “Prison Song.” What inspires you to make such political music, and what do you think the relationship is between your music and politics?

SERJ TANKIAN: Right. I’ve always said that a good love song can be more powerful than a good political song in the world, if it brings people together. You know, music has many incredible purposes, to entertain, to educate, so many different things. But personally, I’ve always been an activist at heart; I’ve always been a political person; I’ve always studied geopolitics. So for me, music has always been an extension of that thing. And to me, rock music is a perfect form for that kind of contentious pushback against injustice that you can have. And so I kind of lucked out in an industry where that’s what I was supposed to do, is speak my mind and, I guess, be loved for it, which is incredible. So I’m very grateful for that.

Now, obviously we have songs, both in System and on my own solo records, that are not political, but there’s something about speaking the truth to power through the arts that is effective, and it’s intuitive. It doesn’t only apply to our rational mind, but also to our intuitive senses, and that connects everyone. People feel it when they- you know, first time I heard Rage Against the Machine, for example, I didn’t understand the lyrics, but I could feel the depth of the rage. I could feel the depth of the fighting against injustice within the music. I could feel that, it’s a feeling. And so, that intuition about music and the arts, in terms of translating into political change, progressive change, is a beautiful thing. And I’m happy to be in that world.

SERJ TANKIAN: Yeah, I think earlier I said, regarding the Armenian revolution, I said it takes a cultural evolution to have a peaceful revolution. The same applies. In other words, I think what we’re lacking in the world is less culture, and you know, people with guns in schools, that’s a lack of culture. There’s a lot of problems that can be bettered with better education and culture. And I think that the arts can be instrumental in that world. Someone wants to play guitar and sing a beautiful song is not going to take a gun and kill someone. I could be wrong. So- or paint. Do beautiful painting and then, you know, that’s what we’re lacking in the world.

We have a lot of technology, and we haven’t evolved to meet that technology, in a way, because we still act with the fear and flight instincts of humanity, of our forebears. So, as a civilization, I’d like to see a civilized, as Gandhi would say, when they asked them what he thought of Western civilization, saying it’s a good idea. I think we’re lacking that. I think we need to expand upon that.

You hear music today, it’s quite shit. A lot of it is quite commercial and boring and monochromatic, unemotional, and quite pathetic. Not just music, but a lot of the arts, films. Every film is you know whatever could be sold most, comic book heroes, which is, I love comic books and comic book heroes, but if every film has to be that because it makes money, then again, you are creating this saturated market for art, and it’s dangerous. We have to watch out, the level of commerciality that that impinges upon art, artistic real estate, if you will.

BEN NORTON: Yeah, and then finally, concluding here, what can we look forward to in the future? What are you working on these days, in terms of your politics and your art, and what do you think is in store for the future for Serj Tankian?

SERJ TANKIAN: Going back to Armenia within a month. I want to be a part of this beautiful nation-building that’s going on, this openness that’s happening. So that’s one thing. And in the immediate future, for myself, I’ve been scoring a lot of films. And I’m going to be continuing doing that this year and going forward. We have some tour dates with System, southern California and basically Southern United States, Western United States for a week or so in October.

What else do I have on my — I’ve got a film that I’m putting together from stuff that I’ve shot over the years, and the ending is going to be me going to Armenia and seeing the people and talking and stuff. So, I’m quite excited about that. I’ve got EP that could possibly go along with that, of some rock songs that I want to put out. So, lots of fun projects- a coffee line that I’m doing, an Armenian coffee line, with some friends, which is fun. Just a lot of fun things to do, yeah.

BEN NORTON: Great, well we all look forward to seeing the amazing things you’re doing; you’re extremely prolific. We were joined by Serj Tankian, who is an award-winning musician and composer. He is the vocalist of the band System of a Down, and has released several albums under his name, as a solo artist. Thanks so much.

Haiti: Four Killed as Authorities Crack Down on Anti-Government Protests