In the Home of the Richest Man in Palestine 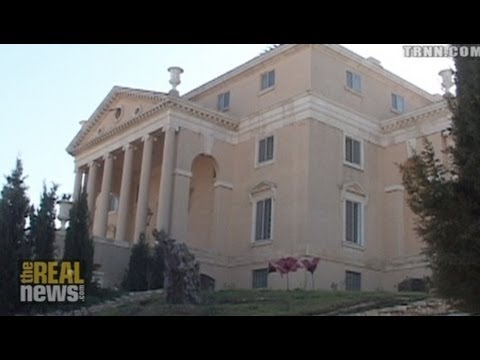 LIA TARACHANSKY, PRODUCER: On January 6, U.S. Secretary of State John Kerry left Israel-Palestine for the tenth time since the beginning of the current round of negotiations. Before he left, he held a press conference where he reasserted his belief in the need for hope.

JOHN KERRY, U.S. SECRETARY OF STATE: History’s adversaries can actually become partners for a new day, and history’s challenges can become opportunities for a new age.

TEXT ON SCREEN: “In essence, all these months we didn’t negotiate with the Palestinians, we negotiated with the Americans”

“Only our continued presence in Judea and Samaria [West Bank] and along the Jordan River will guarantee our central cities and airport don’t turn into targets of rocket fire.”

TARACHANSKY: The remarks sparked condemnation from the State Department, politicians, and commentators and led to the minister apologizing.

But while the controversy focused on Ya’alon’s defiance of the Americans, little attention was paid to what he actually said. The headlines focused on Ya’alon calling Kerry determined and messianic. However, the minister’s lack of faith in the American-mediated negotiations is not new. In fact, it’s the dominant attitude towards the 20-year process that hasn’t led to peace but to the mass expansion of Israel’s settlement project in the West Bank and the outsourcing of the cost of the occupation to the Palestinians themselves.

One of the process’s main failures is that the negotiations exclude the vast majority of the Palestinians, as they’re either refugees, citizens of Israel, or living in Gaza under the Hamas government, which is not invited to the negotiations table. Even the Palestinian Authority, which has semi-autonomy in the West Bank, is hardly present. In October its chief negotiators resigned, citing the lack of serious commitment from the Israelis and an inability to actually implement any deal that may be signed.

However, one man has not lost hope. Munib al-Masri is the richest man in Palestine. His efforts alongside other Palestinian and Israeli businessmen are largely responsible for this negotiations round even taking place.

Earlier, The Real News was joined by journalist Max Blumenthal as we visited al-Masri’s mansion situated above the Balata Refugee Camp in the West Bank city of Nablus.

MAX BLUMENTHAL, PRODUCER: Apparently, Mr. Masri has a taste for Italia, and I’m wondering if, like, the four tenors are just going to start being piped through speakers in the ground.

We actually can’t find where he is right now.

[SUBTITLED TRANSL.] Yes, hello. Good morning. [ENGLISH] This is Lia and Max. We’re calling–we’re just here at your estate. We were trying to find you.

MUNIB AL-MASRI, CHAIRMAN, PEDICO HOLDINGS: Hercules is what I call [incompr.] Palestinian [incompr.] nice to meet him and you to meet him to tell you that I’m Palestinian and I represent the perseverance, the strength, the longing, and modesty.

That’s me with Yasser Arafat and with the prime minister of Israel [incompr.]

BLUMENTHAL: I look out your window and I see Brakha and I see E1 being authorized, you know, the settlements right out there. There’s a whole–Nablus is surrounded with settlements. The peace process has been going on since Madrid. And they keep building more and more settlements. They say they are going to keep the major settlements. And they’re expanding them, you know, E1, to cut the West Bank in half.

So my question is: what is your vision of how a two-state solution can be implemented?

I have some friends from the Israeli side. They believe like I do believe. And we hope that they will wake up, Israel will wake up to say enough is enough.

I think Mr. Mahmoud Abbas is doing his best to make real peace and he’s honest about what he’s talking about peace. And let’s do it.

BLUMENTHAL: And this is an incredible tapestry here.

AL-MASRI: Yeah. This is 17th century tapestry showing the two women claiming the same child, and Suleiman, of prophet Suleiman.

BLUMENTHAL: Sort of metaphor for the two-state solution.

TARACHANSKY: As is custom with journalists and political delegations, al-Masri invited us to join him for breakfast.

AL-MASRI: I represent–I am the chairman of the biggest company in the West Bank and Gaza. We came here after Oslo to make the political process.

TARACHANSKY: Al-Masri is a geologist who made most of his fortune discovering oil in Libya. He then returned to the occupied territories, and together with other Palestinian billionaires in the diaspora formed PEDICO, the biggest Palestinian holding firm. Together, the new Palestinian oligarchs helped shape the West Bank’s neoliberal economy.

Ibrahim Shikaki is an economist in Ramallah and a researcher for the Palestinian Economic Policy Research Institute.

IBRAHIM SHIKAKI, PALESTINIAN ECONOMIC POLICY RESEARCH INSTITUTE: Since Oslo, in the early years of the ’90s, so let’s say ’93, ’94, there was a huge blockade. So a large number of Palestinians lost their job in Israel.

The PA came to the rescue with public sector. That’s why we have something like 160,000, 170,000 Palestinians working in the public sector.

BLUMENTHAL: What kind of resistance activities or resistance posture could the business community in Palestine take in the West Bank specifically?

SHIKAKI: Well, the main thing that businessmen, the economic resistance, if you want to call it, can focus on is definitely boycott. That is one of the main targets that Palestinians should focus on.

TARACHANSKY: But al-Masri believes in dialog. In May he spoke at the World Economic Forum alongside Israeli billionaires, urging for more negotiations.

BLUMENTHAL: But people say that you meeting with Rami Levy is a form of normalization.

TARACHANSKY: Earlier you said the culture of resistance in Palestine has been replaced with the culture of the paycheck. Can you explain the thought?

AL-MASRI: Yeah. Well, I mean, we have resisted since the Nakba with the checkpoints, with the borders, with the blockade of Gaza, with the separation, with these thing. They succeeded in making us believe or making us change the resistance into the check culture.

BLUMENTHAL: Do you think these jobs and the kind of economy that’s behind them, this new economy is sustainable?

AL-MASRI: As long as there is no freedom of movements of goods and services, it’s very difficult for an economy to thrive. We export maybe less than $100 million to Israel, and we import–maybe it’s two and a half or three billion dollars of goods and service from Israel. So it’s not balanced at all. We are subsidizing the occupation.