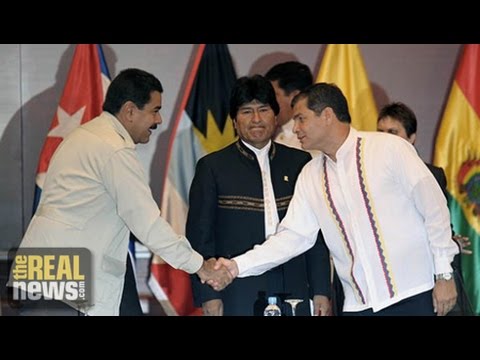 President Obama has issued an executive order placing sanctions on seven Venezuelan officials for alleged human rights violations and political prosecution of opposition protesters since February 2014. The statement, which opens by describing, quote, “the unusual and extraordinary threat to the national security and foreign policy of the United States posed by the situation in Venezuela.” Obama will order the freezing of the officials’ assets and block their entry to the U.S.

It has been denounced by several Latin American leaders. Bolivian President Evo Morales said, “We condemn, we repudiate, in the 21st century we won’t accept this kind of intervention by the United States”. Well, Ecuadorian President Rafael Correa said, “It must be a bad joke, which reminds us of the darkest hours of our America, when we received invasions and dictatorships imposed by imperialism.”

The Cuban government also issued a statement, which said, “How does Venezuela threaten the United States? Thousands of kilometers away, without strategic weapons and without employing resources nor officials to plot against U.S constitutional order, the statement is unbelievable, and lays bare the intentions of those who have come up with it.”

Well, now joining us to talk about all of this from Claremont, California, is Miguel Tinker Salas. He’s a professor of Latin American history at Pomona College, author of The Enduring Legacy: Oil, Culture, and Society in Venezuela, and a forthcoming book is Venezuela: What Everyone Needs to Know.

MIGUEL TINKER SALAS, AUTHOR, VENEZUELA: WHAT EVERYONE NEEDS TO KNOW: Thank you very much.

JAY: So what do you make of this statement? [crosstalk]

TINKER SALAS: [crosstalk] the differences that exist within Venezuela, and it’s been part of a tit-for-tat struggle that has erupted since Obama purportedly attempted to restore relations with Cuba. The very same day in which the U.S. administration indicated that they were going to normalize relations with Cuba, they also said that Venezuela would now receive sanctions. So this is a continuation of that process of escalation, so that while on the one hand they can argue that they’re trying to open up relations with Cuba, on the other hand they’re trying to have Venezuela replace Cuba in the U.S. political discourse between the right and the left.

JAY: Now, on the face of it, the hypocrisy is so ridiculous I think a school child would be able to point it out, that the United States says nothing about human rights violations in a place like Saudi Arabia, and now targets for sanctions Venezuela. So, given that the optics of this, at least outside the United States–I think the whole world must find this kind of a bad joke, as I said in the opening–why now? Why do you think the United States is upping the ante here?

TINKER SALAS: Well, there’s two possible scenarios. One is that the opposition in Venezuela has proven incapable or have not been able to pressure the Maduro government, and they want to expedite the process of regime change in Venezuela. So that may be a real possibility, that they hope that these kind of decisions will exacerbate internal conditions within the country. But the other one is also the relationship that it has with the Summit of the Americas. On April 10 and 11, there is an upcoming Summit of the Americas, and there is an argument for those in Venezuela that they don’t want Maduro present at that meeting and they hope to bog him down in internal problems in Venezuela.

I think this in fact will backfire for the U.S., because rather than expecting to separate Venezuela and Cuba as they were hoping to do initially in normalizing with Cuba while at the same time targeting Venezuela, they may in fact have begun to unify the various countries of Latin America around Venezuela. And Obama may in fact confront a repeat of the 2012 Summit of the Americas in Cartagena, Colombia, where he was completely isolated on the question of the drug war and on the question of Cuba. So this issue may in fact backfire.

JAY: Yeah. It seems very strange timing to do it so publicly. I mean, the truth is the Venezuelan economy’s in terrible shape, especially given the price of oil, and Maduro is polling very low. You’d think the Americans would be smart enough to stay the heck out of this and not allow this to become an American-centric issue. But to step right into it, as you say, it’s going to–it’s the foreshadowing of a 2002 coup again. And all of Latin America, whatever they think of Venezuela–most of Latin America’s very sympathetic to Venezuela–they will be outraged at any other attempt at a coup.

TINKER SALAS: I think that’s obvious. And I think the larger issue is that they’re actually playing, therefore, this card, this notion that they can cause real divisions between Latin America and Venezuela, and they’re hoping to isolate it. Again, that’s why, in other words, they attempted to normalize with Cuba while at the same time attempting to condemn Venezuela. So I think it plays into that argument.

I think the other part of it that’s important is that they’re also fishing in troubled waters. They’re trying to see if by doing this action against largely military individuals they can see if there’s other fissures within the military or within the judicial system, ’cause this sends a strong message to the Venezuelan military: we’re watching you, we’re targeting you. And much like they did in Chile, they’re trying to find different gaps, spaces, fissures within the military, particularly if there’s differences within the current government, that they can–able to exploit, particularly around a potential coup.

JAY: Now, what do you make of Maduro throwing–what is it?–like, 100 people out of the U.S. embassy, reducing it down to 17 people? It seems to me–I mean, I don’t quite get that. If you think the U.S. embassy was directly involved in the coup attempt that the Venezuelan government has described, then why don’t you throw them all out. And if you don’t think they’re directly involved, then don’t throw anybody out. But Obama in some sense does have to respond to that kind of throwing out of all his people.

TINKER SALAS: Except that Venezuela isn’t responding to the fact that there are only 17 Venezuelans in the U.S. intersection in Washington. So what they’re saying is, we want parity. If we’re only allowed to have 17, then you should only be allowed to have 17. Why do you need such a large diplomatic mission at a time when you don’t have an embassy here or an ambassador here? That’s the larger question they’re asking.

The same thing in terms of the visas, because the U.S. requires Venezuelans to have a visa and go through a long intricate process and pay large sums of money in order to get a visa. So there Venezuelans are doing what exactly the Brazilians did, which is obligate U.S. residents to go to the consulate, pay their fee, and get a visa so they can control access into their own countries and at the same time have, essentially, parity. So I think that the reduction of the embassy staff and the question of the visas go hand-in-hand in this tit-for-tat back-and-forth between Washington and Caracas.

JAY: Now, there’s elections by the end of 2015 for the National Assembly. How do you think all this relates to that?

TINKER SALAS: Well, I think that, as I suggested, that this is an ongoing effort to destabilize Venezuela. Venezuela has been targeted for regime change in Latin America by the Bush administration, by the Obama administration. Bush attempted to inoculate Latin America against Venezuela. Obama’s been trying to isolate Venezuela, and particularly in light of this new Cuba strategy. So I think it’s a part of a continuum of that process.

I think that, unfortunately for the U.S., what they’ve done is essentially stepped right into the middle of the electoral divide and the electoral process and essentially [so show (?)] their cards that they are interested in regime change and essentially are taking very direct actions and aiding and abetting the Venezuelan opposition in this process. And I think in many ways it legitimates efforts at coups in Venezuela, which is a very unfortunate message for the U.S. to be sending toward Latin America in 2015.

JAY: I mean, like most U.S. foreign policy, it often has more to do with U.S. domestic politics than it has to do with any thoughtful assessment of what is going on in the world. I mean, how much of this Venezuelan posturing–’cause the sanctions themselves targeting seven guys is not going to make much of a difference to Venezuela–how much of this is just throwing some red meat to some of the Republicans that hate the Cuba policy?

TINKER SALAS: There’s no doubt it could be a factor, particularly in light of the fact that Bob Menendez, senator from New Jersey, may in fact be indicted, and as a result has been one of the strongest advocates on behalf of sanctions against Venezuela. This could be part of a dynamic in terms of U.S. internal policy, and particularly throwing, as you said, red meat to the right wing sectors.

JAY: Alright. Thanks very much for joining us, Miguel.

TINKER SALAS: Thank you very much.

Just a note before we end the interview, for full transparency’s sake, we’d like you to know that The Real News Network is associated with a company called “The Baltimore Studios” and Baltimore Studios does things like rent out the studio in the building that we’re in. It also does some productions for third parties, includes other broadcasters at times, and one of those is a show called “The Global African”. That show is produced for TeleSUR and TeleSUR’s owned by a few latin american countries including Venezuela, Bolivia, Cuba, Ecuador, Argentina, Nicaragua, and Uruguay. So, we don’t think that affects our coverage but it’s up to you to judge. So, we thought you should know. Thanks for joining us on The Real News Network.

Miguel Tinker Salas is a professor of History and Latin American studies at Pomona College in Claremont, California. He is co-author of Venezuela: Hugo Chavez and the Decline of an Exceptional Democracy and author of Under the Shadow of the Eagles and The Enduring Legacy: Oil, Culture, and Society in Venezuela. His latest book is…