Most Iraqis want US troops out now

Paul Jay speaks to Mike Tharp, Executive Editor of the Merced Sun-Star who's currently based at the McClatchy Newspapers' Baghdad Bureau. Tharp says that most Iraqis "want the "US out totally as soon as possible." They've seen the last six years as an occupation, not as bringing freedom and democracy to Iraq, but instead the loss of tens of thousands of Iraqi lives as well as over 4300 American troop losses, a Trillion dollars spent by the US. I don't know what estimates are being put on the damage done to the Iraqi society and economy, but it's incalculable."

Paul Jay speaks to Mike Tharp, Executive Editor of the Merced Sun-Star who's currently based at the McClatchy Newspapers' Baghdad Bureau. Tharp says that most Iraqis "want the "US out totally as soon as possible." They've seen the last six years as an occupation, not as bringing freedom and democracy to Iraq, but instead the loss of tens of thousands of Iraqi lives as well as over 4300 American troop losses, a Trillion dollars spent by the US. I don't know what estimates are being put on the damage done to the Iraqi society and economy, but it's incalculable." 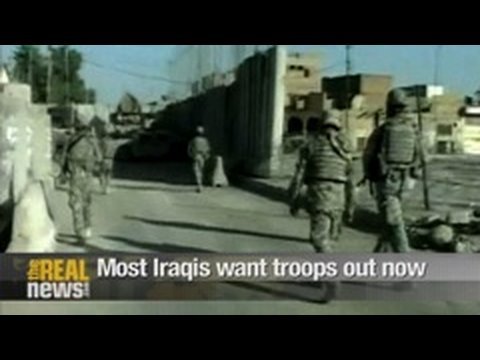 PAUL JAY, SENIOR EDITOR, TRNN: Hi. Welcome to The Real News Network. I’m Paul Jay, coming to you from Washington, DC. And joining us now from Baghdad is Mike Tharp. He’s the executive editor of The Merced Sun-Star, a McClatchy paper in California. He’s now in the McClatchy bureau in Baghdad. Thanks for joining us, Mike.

MIKE THARP, EXECUTIVE EDITOR, MERCED SUN-STAR: Glad to be on, Paul. Thanks for having me.

THARP: Well, it’s that old Creedence Clearwater song [that] goes, in "Who’ll Stop The Rain": "Clouds of mystery pouring confusion on the ground." Both sides are still trying to figure out how it’s going to actually work in terms of who does what, when, and where. It started off a little inauspiciously, because the Americans thought that June 30 meant that when the clock tick past midnight on June 30 to July 1—. Iraqis thought when it ticked past midnight on July 29. So they were about 24 hours off. They realized it. The Americans just adjusted their schedule and moved it up 24 hours. So there were no major hitches as a result of that. Yesterday the Baghdad operations center for the Iraqi army sent out a message prohibiting all American patrols in Baghdad. That caused some consternation because it was not expected. It was clarified later by Baghdad operations that American convoys could go out at night. So it’s still a work in progress. There are bound to be some glitches and misses and—.

JAY: Now, we saw lots of cheering crowds celebrating it. The Iraqis called it National Sovereignty Day. People were seemed rather ebullient, rather joyous at the fact that US troops were leaving, which is a bit contrary, you would say, to some of the narrative that we’re hearing here. Here we’re hearing that Iraqis are afraid that if US troops pull out, the sectarian warfare would start again. But we saw lots of cheering Iraqis. What seems to be the case?

THARP: Well, both are true. We’re still seen as occupiers by the majority of the Iraqi civilian population. But they also recognize that the American security blanket has been pulled back a bit from where it covered them before. Now Americans will be on call, like an OnStar arrangement, whenever the Iraqi Army or national police need them. But those two entities, the Army and the national police, are now mainly responsible for Iraqi military sovereignty and control.

JAY: But there seems to be, at least amongst the Iraqi population, a sort of confidence that they can deal with this themselves. And there were a lot of signs and politicians and others saying they actually wanted the American troops to get completely out now. What is it? In terms of the people that you’ve had contact with, what’s the sense of it?

THARP: I don’t know the exact percentage, but I’m sure it’s well over 70 percent want the US out totally or as soon as possible. They’ve seen the last six years as an occupation, not as a liberation, not as bringing freedom and democracy to Iraq, but instead the loss of tens of thousands of Iraqi lives, as well as over 4,300 American troop losses, $1 trillion spent by the US. I don’t know what estimates you put on the damage done to the Iraqi society and economy, but it’s incalculable. So they would want us out. And I think they are willing to take their chances on the Iraqi Army and the Iraqi national police.

JAY: And what sense you get from the American soldiers you were with? Are they ready to go? We’re hearing here that the soldiers want to stay and not lose what’s been gained and so on.

THARP: Charlie Mike—continue to march. That’s what the soldiers’ mantra is over here in general. I think they are still figuring out, as I mentioned, how things are going to work on the ground. But they intend to keep their morale up by serious training missions, by maintenance on their equipment and vehicles. As you know, by 2011, all US troops have to be out of here, and probably by the summer of 2010 combat troops will be gone, leaving a residual force of 50,000 to 60,000 support troops. So they’ve got a lot to get ready to depart with whenever they leave. The unit I was with is heading out in November, for example, after a one-year tour.

JAY: There’s some drumbeats taking place here in Washington about slowing down the withdrawal, renegotiating the status of forces agreement, so that troops, combat troops, can stay later than 2012. There’s a piece in the Council on Foreign Affairs [sic] today. One of their senior writers, a defensive specialist, Stephen Biddle, goes through all the various things that can go wrong in Iraq. He says the only real safeguard is to keep combat troops past 2012. Do you hear any of that there? And how do you think Iraqis and American soldiers would react to that kind of policy?

THARP: The only people I hear that from in Iraq are Americans. I think Iraqi people would not want the American combat forces to stay beyond 2010, wouldn’t want any forces to stay beyond 2011. Iraqi politicians, parliamentarians, they probably will listen to their constituents and at least give lip service to total withdrawal by 2011. There is some confidence—guarded conference—by the US military, at least the ones I’ve met here and embedded with, in the ability of the Iraqi Army and national police to handle things from now on. There’s some guarded confidence.

JAY: Now, some people think that the national police and the Iraqi army is more or less a kind of militia for Maliki. And there’s a lot of talk here and in other places—I mean here meaning Washington—that Maliki is consolidating a great deal of power. And even to, like, I mean, Biddle’s piece in the Council of Foreign Affairs, he talks about is Maliki actually preparing for a kind of dictatorship there and will that reignite sectarian warfare. Do you get any sense of this?

THARP: I think he’s got to listen to the other parties in the government. Maliki is certainly powerful. I don’t think he’s anywhere near a strongman yet. I wouldn’t be surprised if wanted to be one. He’s a politician, after all. But I don’t think he’ll be allowed to. They have serious problems up north in Kurdistan that have to be resolved. They haven’t been able to amend their constitution because of infighting and intra-party, intra-ethnic, intra-religious bickering. I just don’t see him as emerging as that powerful of a leader anytime soon.

JAY: Okay. Just finally, there’s supposed to be a referendum in August to confirm the status of forces agreement. Is that referendum actually going to happen?

THARP: Yeah, it’ll still be legal. They’ll just put it off. It was a pipe dream to think they could do it this summer in any event.

JAY: And to what extent is that going to ignite any kind of more popular resistance to the status of forces agreement? Or do you think most of the political players have accepted it?

THARP: I think most of the political players have accepted it.

THARP: Because there—because there’s an end game to it, there’s an exit strategy. In fact, the exit is mandated. So that makes Iraqi politicians and ordinary citizens satisfied.

JAY: Thanks very much for joining us, Mike.

THARP: Thanks for having me, Paul.

Mike Tharp is the Executive Editor of the Merced Sun-Star. His column, “Copy!