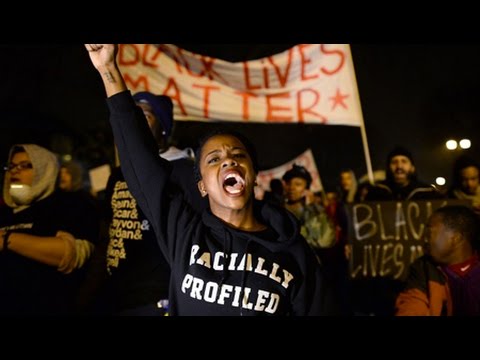 Just days after the conclusion of the Democratic National Convention, the movement for black lives released a detailed political agenda. Some of the demands focused on ending the war on black people, reparations for slavery, investing into black communities and away from corporations, and finally community control and political power. Now the coalition was made up of over 50 different grassroots organizations representing thousands of black lives matter activists from across the country. In the upcoming weeks, the Real News will host in depth debates and discussions about each demand and we look forward to having those conversations.

But now joining me to discuss today’s released are two guests who played an integral part in creating this political agenda. Our first guest is Janae Bonsu, the national public policy chair of BYP100. She is a black feminist, activist, organizer, and scholar based in Chicago. Our second guest is Montague Simmons. He’s with the organization for black struggle who is heavily involved in the Ferguson uprisings and the movement for black lives policy table.

Thank you both, Janae and Montague for joining us. Janae I kind of wanted to start with you. Why now? Why release this policy just days after the democratic nomination?

JANAE BONSU: Well we feel like it is very important to intervene in this political moment because neither the Democratic National Convention nor the Republican National Convention address the root causes or necessary solutions to the ongoing war in black communities. And so it is up to us to be our own advocates and really take on the onus of putting forth the vision that really is reflective of black lives actually mattering in practice and really taking it upon ourselves to introduce policy that is transformative and not incremental and reactionary.

ROSE: Montague, this goes beyond—you’re from St. Louis, Missouri. This political agenda, it’s kind of different for I guess mainstream to associate black lives matter with something other than police violence. What other challenges are more important that police violence that this political agenda addresses? Which ones are on the forefront and need to be addressed sooner than others?

MONTAGUE SIMMONS: Well I don’t necessarily think we’re weighing them one versus the other in terms of priority. But when we have a conversation about what safety in our community is and what community violence looks like, it does go beyond that discrete expression of violence in terms of how police show up. It’s violence when you’re actually living in a community when you can’t find good quality food. It’s violence when public policies divest in resources from a community where you can’t get access to good healthcare. For us the platform, it combines those to show not only are we talking about the explicit war in terms of criminalization, mass incarceration, police violence. But also when you’re divesting both resources and people in the community through criminalization. When you can’t find quality jobs or means to support it. Or when communities really deny the opportunity to have real political control, community control of the policy making vehicles in its community. So these things we’re not prioritizing one versus the other. But the feeling was the slate of demands are all interrelated.

ROSE: And Montague, I just want to briefly just ask you, recently President Obama has hosted several discussions with black lives matter activists. These were smaller discussions than the list of 50 different grassroots organizations who are signed on as endorsers of this political agenda, the movement for black lives. What do those meetings, those small meetings with President Obama and those activists–what role did they have to play in creating this political agenda and has President Obama accepted this agenda?

SIMMONS: Well we haven’t heard any responses from the White House. I mean we haven’t formally presented. It’s just been publicly released today. I will say that I think a few of the folks that may have been involved in those conversations have been in some way or at least their organizations have been involved in the process. This process began with a convening that was held in July last year. The event itself drew more than 3,000 people. And the assembly process, the people’s assembly that actually began this between somewhere of 200-300 people. So for us it was important to make certain, one, the platform reflected the work that was already happening on the ground and not necessarily the policy experts to say no lets intervene in this way. Let’s look at the work that’s already happening. But also, to make certain that as we begin to develop the platform that it wasn’t just a few people doing this and presenting this and saying hey here’s a remedy. This actually included hundreds of folks from a variety of organizations around the country that represent thousands of folks that go across the spectrum of black folks across America.

ROSE: Now Janae you are from Chicago where in November Chicago police released the video of the shooting, police involved shooting of Laquan McDonald and BYP100 was one of the groups in Chicago on the ground protesting. How realistic is it that lawmakers, that political figures will accept this policy, will implement parts of the policy, if not the whole policy?

BONSU: I think it’s very likely so long as they are put under pressure. I mean we can’t and nor do we intend to just put this platform out here and expect it to pass itself. I mean we see policy as one means to getting to what we want right? So this will be in conjunction with policy advocacy, lobbying, direct action, and grassroots campaigns that are built around these ideas. So we will continue to put pressure on the ground directly to elected officials so that they have no choice but to adopt the agenda. And really putting hard stances on elected officials who are supposed to be accountable to us. They work for us and this platform is serving as a tool for organizations, organizers, activists, individuals on the ground, to really have something tangible to actually advocate around. So long as the pressure stays on and we’re very intentional about how we’re engaging with these folks, I think it’s very likely.

BONSU: I don’t really differential much between the Democratic and the Republican National Convention or parties in general. It’s about the actually policies and platforms that will lead to transformative change and we haven’t seen those transformative solutions from either party. It’s about shifting power and reallocating resources to our communities. So we will use this platform indiscriminately with both the Democratic and Republican parties in order to get what we’re calling for and for the war on black communities and investment in our communities, divestment from the systems that harm us. Again we haven’t seen those solutions from the Democratic Party so we’ll continue to push for them.

ROSE: And Janae you’ve served as the public policy chair for BYP100. I just wanted to get your grasp on how realistic is it to assume that some of these demands if not all will actually be accepted by elected officials, will actually be implemented into law through the legislative process. Is it too farfetched of an idea to think that would happen?

BONSU: I don’t think so. I mean I know that we understand that of the 39-40 comprehensive policy demands that we’ve put forth in this agenda, there’s not going to be one sweep of law passages or you know these laws aren’t going to be enacted in one sweep but it is going to be a process. Some of these policy solutions are short term. Some of them are intermediate, some of them are long term. But we do whole-heartedly believe in this entire platform and will continue to push it so that we can build the world that we want to build. So some of these solutions are again, they’re not in priority order but some of them will come to fruition before others. But we are wholeheartedly pushing the whole platform absolutely.

ROSE: Montague, just briefly as we’re running out of time. We have seen a political agenda presented before through campaign zero which was presented by a smaller group of activists. Just briefly if you can point on what differentiates this platform put out by the movement for black lives versus the campaign zero coalition?

SIMMONS: Quickly, 1 the process. The platform is the product of over a year of conversations, engagements, convenings, feedback with organizations from out of the country. Its being launched by United Front and it address more than just police violence. Provides resource organizations and the document’s just wider in scope. It was born from a very different process. It was a document that was meant to challenge existing systems while offering transformational policy.

ROSE: Alright, well thank you both for joining us. Montague Simmons and Janae Bonsu from the movement for black lives matter coalition who presented this very detailed political agenda today and thank you all our viewers for tuning into the Real News. I’m Kwame Rose for the Real News Network in Baltimore.