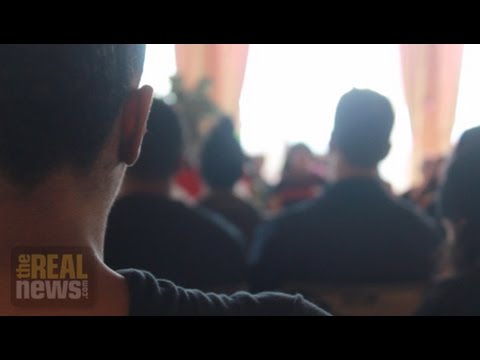 MEGAN SHERMAN, TRNN: With the prospect for a new $210 million juvenile jail looming in Seattle, a coalition of activists group held what’s known as a people’s tribunal to formulate strategies to fight it.

Ariel Hart, a youth organizer with YUIR, Youth Undoing Institutional Racism, talks about the purpose of the tribunal.

ARIEL HART, YOUTH ORGANIZER, YUIR: It is important that as we’re organizing, as we’re trying to talk to the politicians and dismantle the system that we’re building and we’re healing and we’re growing our community.

SHERMAN: The struggle to block the jail comes as troubling statistics show African-American youth are disproportionately ensnared in the city’s juvenile justice system. Census figures show that while African-American teens make up 10% of the youth population, they represent 40% of the population who enter the system.

LAURA HALDANE, YOUTH ORGANIZER, YUIR: We know that the prison-industrial complex has historically disproportionate rates for locking up black and brown bodies, and we know that this move to build a new youth jail is essentially going to be a direct perpetuation of racism, racism as a system.

SHERMAN: Michael Moynihan, also known as Renaissance the Poet, says it’s difficult to break down the criminalizing stereotypes that are too often attributed to youth of color.

MICHAEL MOYNIHAN, ACTIVIST/POET: They see black people selling drugs and stuff like that, but there is way more drugs getting pumped through white homes in rich, wealthy, middle-class areas like that. And so talking to the people and the public and shattering those misconceptions is sometimes difficult, because it becomes a part of their identity.

SHERMAN: The detention center is slated for completion in 2019. But the tribunal participants gathered to formulate strategies to block the replacement of the aging 210-bed facility that was last renovated in 1972. Opponents of the new facility struggle with the fact that 55% of Seattle voters approved the project in a referendum vote in 2012. They contend voters didn’t really understand they were in fact voting for a new juvenile jail.

SHERMAN: J Wesley St. Clair, a chief judge for the King County Court Juvenile Department, who was present during the tribunal, says that a detention center is necessary, and that the majority of the building would be used to provide rehabilitative services.

J WESLEY ST. CLAIR, CHIEF JUDGE, KING COUNTY JUVENILE COURT: The one thing that we’re really looking forward to developing is restorative justice principles. Implementing those both in the schools and in the courts, in our detention facilities. Even among our staff. Because it teaches you how to be–changes the lens with which you see the people. You know, no longer defendants. They’re people. These are our kids.

SHERMAN: Gabriel Teodros, a musician who was raised in Seattle, says that instead of resources for juvenile jails money needs to be spent on better options for recreation for young people.

GABRIEL TEODROS, MUSICIAN/WRITER: Tons of resources being dumped into that, and nothing being dumped into like, well what can, what can really give these youth better, you know, alternatives for the things that they can do with their lives? Like, it’s important that we’re talking about the prison-industrial complex. It’s important that we’re organizing against this youth jail. But we also have to be organizing probably doubly and triply, like, it’s more important for us to be, to building the alternatives that we want to see.

SHERMAN: The Real News will continue to follow up with this story as these Seattle community members fight for a more equitable justice system.

This is Megan Sherman, reporting with The Real News Network.