What Happened to Making Steel in Baltimore? – Mark Reutter on Reality Asserts Itself (3/3)

Mark Reutter, author of Making Steel: Sparrows Point and the Rise and Ruin of American Industrial Might, talks about why steel production collapsed across America

Mark Reutter, author of Making Steel: Sparrows Point and the Rise and Ruin of American Industrial Might, talks about why steel production collapsed across America 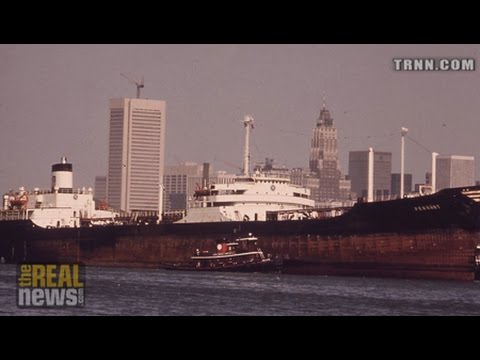 Sparrows Point is an industrial location just outside of Baltimore City. In the late 1950s, Bethlehem Steel had 30,000 people working there. By 2012, there was nobody.

To help tell us the story of why and how that happened and could public policy have made a difference, joining us in the studio is Mark Reutter. Mark has been reporting and writing on Baltimore since 1970, when he started as a 19-year-old summer intern covering cops for The Evening Sun. He later moved on to The Baltimore Sun, where he was a reporter for eight years. In addition to his writings on Baltimore, he’s edited the historical magazine Railroad History and is the author of Making Steel: Sparrows Point and the Rise and Ruin of American Industrial Might. And he’s the senior writer at the Baltimore Brew, which is doing the best investigative journalism in the City of Baltimore. Thanks for joining us.

JAY: One of the things that surprises me, new to Baltimore, is how little I hear anyone ever talk about the harbor. I mean, it’s, like, the economic fact about the place, other than Johns Hopkins, and I never hear anybody talk about it.

REUTTER: It’s fascinating. Do you know they hardly ever–20 years ago there, no one would talk about it, even though there was much more of a traditional harbor. You would still see big boats in Fell’s Point that would unload stuff.

And the fascinating thing is, back in the 1950s, The Baltimore Sun would have some [incompr.] [reviewer (?)] sections, full sections on Baltimore’s place in world trade, with photography lovingly depicting the coal piers that were exporting and all of this. And so it was a real mind-change. And if you want politicians to lead folks, the ones in Baltimore were not doing it, including the mayor, William Donald Schaefer–in many ways quite a progressive guy, but in this one he was deaf. And they were basically going along with this idea that steel and others, oh, they’re just going to go and go overseas.

JAY: Is there–just to back up to this question–we’ve just touched on it–is, going forward, do you think there’s a role for public ownership? If private ownership doesn’t seem very interested in developing manufacturing here, is there a role for public–not just public policy, but even public ownership? I’m not saying it’s politically possible in today’s world, but would it make sense?

REUTTER: Well, I used to think that there were some real possibilities there, and I wrote a certain amount about it. My last few years of intensely covering the details of Baltimore government and peripherally other state government, and even the federal government, is I’ve really–think that the government is very different than it was during the Roosevelt era and the Great Depression, where they did pull off great and wondrous, almost remarkable public works that were both–helped the public enormously with dams and other things. Yes, there were some problems eventually, but some–and had very astute people. The private sector now is getting really bright people. And the plan of Kamenetz, I think, is the most practical one, of turning this over.

There’s been some really somewhat exciting developments that are really positive. I talked about the bankruptcy that the state and the steelworkers and the business community of Baltimore sort of just lost track that here was this 3,000 acres of prime land, with a deepwater port built in there, all there. That’s 20 times the size of the Inner Harbor, to give you some dimensions. It’s a huge area. If you go out there, you’d be really amazed. And they gave it over, through neglect and lack of forethought, to these two Midwest liquidators.

But things have changed in the last six months. A very successful businessman, very low profile, named Jim Davis–Davis is most known as the quiet partner to Steve Bisciotti of the Baltimore Ravens. The two men were childhood partners. They were in their 20s and developed what has become an international staffing, temporary staffing agency. They’ve made hundreds of millions off this. Mr. Davis has gone into a retirement home business and other things, a savvy businessman, and lives in Anne Arundel County. And his investment vehicle, Redwood Investments, bought Sparrows Point from the two liquidators. And that was just consummated.

JAY: How much did he pay?

REUTTER: Around $100 million, or a little over. And so the liquidators did very well. They got a lot of steel and sold a lot of stuff, so they made quite a bit, and then they only paid around 70,000 for Sparrows Point, which on the books was worth over $1 billion. So he is following Kamenetz’s, and they definitely are working together. So there is a public component, but it’s private. And there’s another putting together advanced manufacturing.

Now, the other group here which would interest you is the Maryland Port Administration. They are faced with the super-large Post-Panamax, which will have a number of problems getting closer into Baltimore. But Sparrows Point is far out. It’s out farther than even the Key Bridge, which is a slight stumbling block, despite its height. They want to have advanced facilities there (they haven’t decided) at a place in Sparrows Point called Coke Point, the very end of this.

So they have the Port Authority, which has the money and deep pockets to put a lot of money into pollution control. You have a private investment that has, unlike the liquidators, reached an agreement with the EPA to clean up the plant. That needs to be monitored, but that’s a good sign, because all the previous owners fought it, and they spent more money on lawyers than ever cleaning it up.

And the eventual plan–and Kamenetz has said this in the group who he’s worked with–is, okay, you have these international companies, Japan, China, even. Why not bring a lot of their components by boat here, and then manufacture advanced manufacturing here? And you have 3,000 acres. You have both Norfolk Southern and CSX with quite nice facilities that serve the steel mill could serve this. You’re in a great location, ’cause you’re very close to the Midwest compared to Philly or New York.

So, on paper he has some very interesting ideas, and it in effect is a private-public partnership. It’s not being done with a great deal of public input, which might be a cause of concern, but so far the quality of people–and Redwood has done all the right moves so far. They had a ceremony honoring the tradition of Sparrows Point recently, which was a very good community move. And the whole idea is you have thousands of families in eastern Baltimore County, as well as in the city, who are out of this blue-collar past. And you’ve got skilled workers there.

JAY: Okay. Well, we’ll see whether it works. Quickly, what’s the timeline on that?

REUTTER: Oh, it’s probably, you know, five years off in terms of doing this. It’s a long time. But it is actually moving forward.

REUTTER: Well, thank you. I enjoyed it.

Mark Reutter has been reporting and writing on Baltimore since 1970, when he started as a 19-year-old summer intern covering cops for The Evening Sun. He worked on a wide range of beats for the Sunpapers, including inner-city housing and downtown development, and exposed (with colleague Steve Luxenberg) the corrupt practices of the Pallottine Fathers,…

Artificial Intelligence and the Future of Socialism – RAI with A. Buzgalin (12/12)