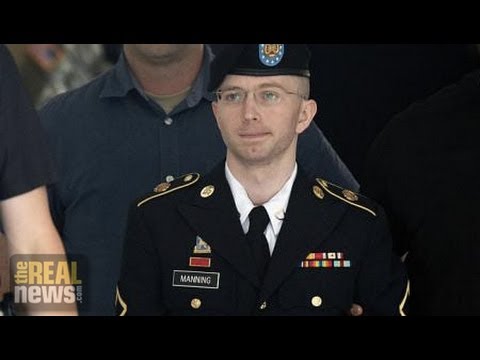 MICHAEL RATNER, PRESIDENT EMERITUS, CENTER FOR CONSTITUTIONAL RIGHTS: It’s good to be with you, Jaisal.

NOOR: So, Michael, we had you on a day before the judge ruled in the Bradley Manning trial. Bradley Manning was acquitted of the most serious charge of aiding the enemy, but he was convicted of more than 20 counts, and he could face up to 130 years or 136 years in prison. What are your thoughts about this, about the ruling and what lies ahead for Bradley Manning?

RATNER: You know, there’s been a lot of ink spilled on it. I’ve done a lot of interviews about what does this mean.

Obviously, I’m sure Bradley Manning is relieved. We’re relieved that he was not convicted of the aiding the enemy charge. He should have never been charged with it. It was life imprisonment, possibly death penalty, although they had said they wouldn’t do it. But it was just so off the wall. It’s the equivalent of saying, let’s just put him up against the wall and shoot him; let’s forget the trial. It was that outrageous a charge.

As we’re speaking, there is a sentencing hearing going on at Fort Meade. It will continue for two to three weeks. What happens in that hearing is the prosecutor puts in evidence as to why Bradley Manning should be sentenced to the sky, probably 136 years. And the defense puts on evidence as to why he should not get such a high sentence, such as he was acting idealistically; what he said, what he exposed was very important publicly. They bring in his background, most likely, and they try and mitigate the sentence as much as they can.

We don’t know what will happen here. I do know that [incompr.] the judge found him guilty of 20 counts is completely off the wall, particularly finding a whistleblower guilty of six counts of espionage. There has never been a conviction for espionage of a whistleblower in the entire 100-year history of the espionage statute. So that’s the new world we are living in. We’ll talk about that a bit in a minute. But that’s the new world of repression of whistleblowers and journalists we’re living in.

I want to bring out a couple of points about an issue that I’ve been debating a lot with people about whether he should be prosecuted at all or whether he was just overcharged, etc. My view is that there should never have been a prosecution of Bradley Manning. He is a whistleblower. He’s one who took important truthful revelations about the criminality of his own government, acted as an idealist and on conscience, and brought out that criminality. That should be a complete defense to any prosecution. It often is. Whistleblowers are often given political asylum, as people have been in the United States who come from China and whistleblower come from Central Asia. Julian Assange has been given political asylum as a journalist who printed the material of whistleblowers. So my view is there should not have been a prosecution at all.

Let’s think about the truths he’s revealed. I’ll just give some of those because I know we don’t want to spend all day on that, but it’s crucial, because most people don’t bring them out. Twenty thousand extra civilian deaths in Iraq. That caused an end, an end to the status of forces agreement that the U.S. had with Iraq, because that status of forces agreement gave immunity. That meant the U.S. was no longer willing to go in there without immunity, because Iraq said, no more, too many civilians are getting killed. Nothing’s happened. Of course, the Apache video, the “Collateral Murder” video which showed the murder of Reuters journalists, ten other people as well. The torture center that was run in Iraq in 2003, 2004 to the knowledge of U.S. officials, hundreds of Iraqis tortured in that torture center. The diplomatic cables which, of course, told us about the secret war in Yemen, which the Tunisian government, current government has given credit to for helping bring on the revolution in Tunisia as well as the Arab Spring.

I could go on and on with the good. But that’s why you don’t prosecute somebody, particularly in the face of a government that we now live in that is utterly secret, utterly unwilling to publicly demonstrate or show what it’s doing, unwilling to go after its own crimes. And you need whistleblowers to expose it. So that’s very clear to me.

What I hear in debates when I get it into them [snip] Michael, you know, you’re right, he shouldn’t have been put prosecuted for espionage, that sledgehammer, but he did violate his oath, he did release classified material, he knew when he was doing it that he was taking a risk. Shouldn’t something happen to him? Well, for the reasons I said, I don’t think so.

But the second thing that I refuse to accept here, absolutely refuse, is that a hair on Bradley Manning’s head ought to be touched as long as war criminals like George Bush, Dick Cheney, Condoleezza Rice, and others are running around scot-free, people who set up and were deeply involved in the torture program, people who supported an Iraq war that killed 100,000–hundreds of thousands of people in Iraq, utterly illegal war, spent trillions of dollars.

And now you see even liberal pundits saying, well, he did good good, yes, Bradley Manning did good, but, you know, it’s civil disobedience of a sort, so he has to suffer consequences. Unacceptable argument. You know, he should never be prosecuted for what he did. But I cannot stand the idea that liberals are still talking about this while ignoring the incredible crimes of this country. They should not touch Bradley Manning ever. But they certainly–people shouldn’t be talking about it and focusing on what’s right for Bradley Manning, what kind of sentence. He should be out. They should be focusing on when is George Bush going to be prosecuted and tried and convicted of the Iraq War, the aggressive war, and the war crimes of torture. It’s one, I think, crucial point.

A second crucial point, of course, is what’s happened in that trial to my client, Julian Assange and WikiLeaks. They attempted to drag Julian Assange and WikiLeaks through the mud, treat him as if he was a co-conspirator of Bradley Manning, trying to say that he was joined at the hip with Bradley Manning and that he too should be prosecuted, that he’s not–that it was not legitimate journalism, that WikiLeaks is an activist organization, doesn’t fit the model of journalism.

Unfortunately, in the context that we’re in in this country with the Obama administration and Holder, our attorney general, they’re trying to blur any kind of line between journalists and whistleblowers. So it was the James Rosen case on Fox, a Fox news reporter. They got a search warrant to look for his associations with the whistleblower who was giving him information on a theory that he was a co-conspirator with a whistleblower. James Risen, a New York Times reporter, is being forced to testify about his source. In the context of the opinion saying he had to testify, they say James Rosen was essentially a co-conspirator. What they said was this crime could not have been committed without James Rosen, the crime of whistleblowing.

So you’re seeing what’s happening in the context of a government that has not only prosecuted more whistleblowers in history, and more use of espionage than all other presidents combined, but is going after particularly my client, WikiLeaks and Julian Assange, of which it’s likely there is an indictment, unfortunately.

So as we look at the Bradley Manning case, we have to understand that liberal pundits are worthless. I debated recently P. J. Crowley, the State Department official who, to his credit, actually talked about what had happened to Bradley Manning when he was tortured, which is why he lost his job. But he was awful on this issue, saying, well, Bradley Manning has to pay a price for doing this.

You know, let’s think about it. Crowley was working for Hillary Clinton, a supporter of the Iraq War, one of the people who actually in the WikiLeaks Bradley Manning documents is exposed as spying on diplomats at the UN, trying to get their credit card numbers, trying to get their flight information, etc. He just can’t accept these liberal pundits and what they’re saying at all.

What we have here is a hero in Bradley Manning. Someday he’ll be walking the streets. I hope sooner than later. I’m hopeful that he’ll get, at worst, time served for this act of heroism, for this act of conscience. You want to see people in the military act consciously. That’s how we got My Lai exposed or should have. That’s how we would have gotten, hopefully, the German atrocities exposed. That’s what we rely on, especially in a government like this that’s utterly secret and utterly criminal.

A last word on this. WikiLeaks was set up in 2008. Bradley Manning started giving it documents in 2010. They were the beginning of opening the door on our most secret criminal–the most secret criminal acts of our government. And then they brought–that opened the door, really, for someone like Ed Snowden.

So we’re at a critical moment where people like Bradley Manning, Julian Assange, Ed Snowden–Barrett Brown, who gave a link to a Stratfor email website is in prison; Jeremy Hammond, who’s in for the Stratfor emails [incompr.] the government is hitting these important whistleblowers, journalists with a sledgehammer. They need all our support. And it’s just time, really, that we should send a message that these people should not be prosecuted. The real war criminals who are walking our streets–Bush, Cheney, and company–ought to be prosecuted.

NOOR: Michael Ratner, thank you so much for joining us.

RATNER: Thank you for having me, Real News.