What’s behind Kerry and Kissinger’s meeting?

Michael Ratner: Despite being from different parties, the meeting between Kerry and Kissinger highlights the consistency of an American foreign policy based on imperialism

Michael Ratner: Despite being from different parties, the meeting between Kerry and Kissinger highlights the consistency of an American foreign policy based on imperialism 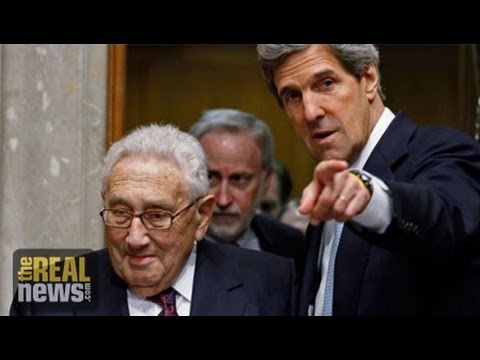 JESSICA DESVARIEUX, TRNN PRODUCER: Welcome to The Real News Network. I’m Jessica Desvarieux in Baltimore. And welcome to this edition of The Ratner Report.

Now joining us is Michael Ratner. He’s the president emeritus of the Center for Constitutional Rights in New York. And he’s also a board member for The Real News Network.

Thanks for being with us, Michael.

MICHAEL RATNER, PRESIDENT EMERITUS, CENTER FOR CONSTITUTIONAL RIGHTS: Good to be with you, Jessica, and The Real News.

DESVARIEUX: So, Michael, what are you working on this week?

RATNER: Well, as usual, there’s a million things going on this week, everything from the pullback in Syria to the 9/11, the anniversary of the 9/11 attacks, as well as the Chilean coup anniversary, 40th.

But what I’ve really been outraged by this week, even though there have been some victories, is a photograph I saw that actually was issued or published on 9/11. And what I call it is I call it the meeting of the KK–not the KKK, but the KK, on 9/11. And it was astounding, the photograph, because what it shows was a meeting of two people. And you can’t make this stuff up. And it’s a picture of our secretary of state, John Kerry, with a former secretary of state, and that’s Henry Kissinger, two Ks getting together.

And why are they getting together, on 9/11, no less? They’re getting together because Secretary of State Kerry, who is responsible now for negotiating with Russia about Syria, wanted some advice from Henry Kissinger about how we should be negotiating with Syria. And we should say that only happened, of course, because this week saw, I think, what I would consider the first military defeat of the United States post-9/11, which is the first time they were actually forced to pull back on their plans to bomb another country. That’s significant. We have to take a lot of credit for it. There was a lot of opposition to it. Important victory.

So what you get now is Kerry negotiating with the Russians and getting advice from Henry Kissinger, Henry Kissinger, who I consider to be a war criminal. This is the same man who while John Kerry in his antiwar days was protesting the Vietnam War as a soldier, Henry Kissinger was working for Nixon and carpet bombing and killing hundreds and thousands of Vietnamese.

You know, until I saw that picture, you know, I figured the most we’d ever get of Henry Kissinger again was whenever his funeral was going to be. I didn’t think you could actually breathe life back into someone who is essentially a walking dead. But here you saw it in this picture.

Of course, Kerry, with a small exception, has become more and more of a warrior, of a person who carries out the policies of the United States. And I think we all remember his speech at the convention when he was running for president. He starts his speech off standing up and saluting the audience and saying, I’m John Kerry and I’m reporting for duty–a truly disgusting moment in John Kerry’s history and the country’s. And, of course, like Colin Powell, who had sold us the Iraq War, Kerry has been, up until recently, up until a few days ago, selling us the war against Syria.

And one observation is striking about the photograph of Kerry and Kissinger, one who served Nixon, a Republican, and one who serves Obama, a Democrat. What does it say about U.S. foreign policy? What it says to me is something a lot of us have known for a long time is that U.S. foreign policy is more or less–and you would have to say more–consistent than you would ever think. It doesn’t make a lot of difference whether you get a Republican or a Democratic president or secretary of state. They both love the military. They brag about it as Obama has bragged about the military. They love to use it. And at their core, they’re imperialists through and through. Both Ks, both Ks believe in American exceptionalism. Obama mentioned that in his speech the other day on Syria. They believe it’s their mission to save the world. And, of course, save the world only applies when it’s saving the world for U.S. interests. So, for example, they get upset and angry over allegations that they believe that Syria used chemical weapons. But you saw 1,400 people killed in Gaza by Israeli forces, not a peep. Likewise, a couple of thousand at least killed in Egypt and not a peep. So you have this amazing thing of the coming together of this war criminal, Kissinger, with a recent new, newly minted, in a way, warrior.

I bring up this KK meeting also because of the day on which it occurred, 9/11. There seemed to be no shame in the fact that this 9/11, yes, it was the 9/11 of the attack on the World Trade Center, but it’s the 9/11 attack, of course, or the anniversary of the coup in Chile, a coup that overthrew a democratically elected government of Chile, the Allende government, that happened 40 years ago on 9/11. And it was backed by the United States, not openly, but secretly. And Pinochet was the dictator who took over, was supported by the United States, supported by Henry Kissinger, who became essentially a friend or a supporter of Pinochet. So on the very day of the anniversary of the coup, you have Kerry meeting with someone who was sued by my own office and by others for his involvement in the coup. And yet they have the nerve to put this together.

CCR was also (my office, the Center for Constitutional Rights) involved in this, because we represented the family of Charles Horman. Charles Hormon, many of our viewers may remember, was featured in the film Missing by Costa Gavras a number of years ago. He was the American reporter in Chile who was killed shortly after the coup. We sued Kissinger in a case called Horman v. Kissinger to try to get information about how he was killed. Ultimately, while we don’t have the answers, we do begin to understand why Charles Horman was killed. A few days before the coup, he was up in [dEnArdElpIn’Ar] up in northern Chile’s–north of the capital, and he saw American troops who admitted basically that they were going to be involved in the coup and were involved in the coup. He was a reporter, a journalist. He had that information. The Chileans did not want that information out, we believe, and we believe the Americans were complicit in that killing. So Charles Horman, we think, was killed as a journalist and a whistleblower exposing the U.S. role in that coup. After many years, documents came out indicating, not 100 percent but very strongly that the U.S. was complicit not only in the coup, which is well known by this time, but in Charles Horman’s murder as well.

You know, and I bring this up really as my final point to say, look it, here’s what happened in Chile, here’s how they’re resuscitating a war criminal like Kissinger. But it also tells us something about whistleblowing, truth, and journalism. Today, of course, I represent and the Center does WikiLeaks and Julian Assange. It shows that in 1973, this government really went all the way with Chile. And they actually killed a journalist or were complicit, it appears, in the killing of a journalist, Charles Horman, in Chile who was going to expose the truth about the U.S. role in Chile.

And today we see what they have done to whistleblowers. Julian Assange is an Ecuadorian embassy. Ed Snowden has been given refugee status in Russia. Bradley Manning is facing–has been sentenced to 35 years. Jeremy Hammond is facing ten years. Barrett Brown has been in jail for a year. And it wouldn’t surprise me at all, when you reflect on Charles Horman’s story, it wouldn’t surprise me at all if they have discussed plots or ideas or plans within our government to perhaps kill some of these whistleblowers who are exposing the truth about what Martin Luther King called the nation that is the greatest purveyor of violence in the world. Thank you.

DESVARIEUX: Thank you so much for joining us, Michael.