Michael Ratner: As Wikileaks Founder Nears 100 Days in Ecuadorian Embassy Sweden's refusal to interview Assange in London suggests they are working with US towards extradition

Michael Ratner: As Wikileaks Founder Nears 100 Days in Ecuadorian Embassy Sweden's refusal to interview Assange in London suggests they are working with US towards extradition 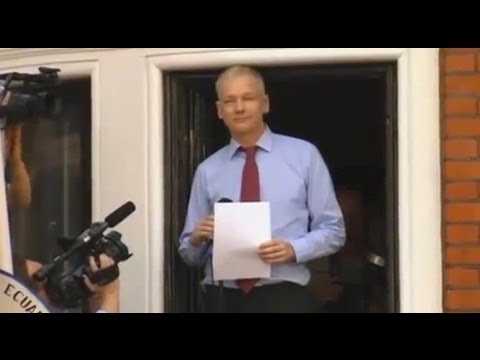 Julian Assange continues to reside in the embassy of Ecuador in London. Now joining us is his U.S. attorney, Michael Ratner. Michael is president emeritus at the Center for Constitutional Rights in New York, also a board member of The Real News. Thanks for joining us, Michael.

MICHAEL RATNER, PRESIDENT EMERITUS, CENTER FOR CONSTITUTIONAL RIGHTS: Good to be with you, Paul.

JAY: So where do things stand with Julian Assange, and what’s the situation in the U.S.?

RATNER: With Julian Assange, September 27, about ten days from now, Julian Assange will have been in the Ecuadorian Embassy for 100 days. That’s a long time, but I think he’s prepared to stay there much longer, until some kind of agreement can be reached.

This has to be solved politically. I mean, there’s all kinds of legal things going on, and we can talk about that briefly, but in the end I think the key thing to solve this is for Sweden to get over whatever is going on in terms of its pride or whatever else is going on in Sweden, and to come to London and question Julian Assange about the sexual misconduct allegations in Sweden. It’s unclear to me why they haven’t done that, becauseâ€”.

JAY: What is their answer to that? I’m sure they’ve been asked it a thousand times. What’s the official answer?

Now they’re sort of saying, well, who is he to dictate the terms? He’s the punitive person who’sâ€”the allegations are made against. So they’re sort of standing on pride. And what that does, it brings out two reactions in me. One is, look it, in a case that’s created such an incredible diplomatic standoff, where the U.K. threatened to go into the embassy, the Ecuadorian Embassyâ€”and of course has now retreatedâ€”but where it caused the Organization of American States to actually take the U.K. to task for that, where that’s happened, where there’s all of this, you know, $80,000 a day to guard the embassy by the U.K., you would think the Swedish prosecutor would get on a plane and go question Julian Assange at the Swedishâ€”at the Ecuadorian Embassy. So it makes you wonder: why haven’t they done it?

And what it makes me worried about is that reallyâ€”which is what I suspected all alongâ€”is that behind the Swedish allegations, behind the Swedish efforts to get Julian Assange so badly and not actually just go question him in London, is the hand of the United States. I believe the United States is manipulating all of this. I believe, and I have a legal basis, I believe, for saying it, that once Julian Assange gets to Sweden, he will be on a plane very rapidly to the United States and to prison conditions that are the equivalent of what Bradley Manning was held under.

JAY: And what is the legal basis for you thinking this?

RATNER: The legal basis is that for almost two years now, I and others have been following what we call the WikiLeaks grand jury. There’s a grand jury sitting in Alexandria, Virginia. Its number is 10-GJ-3-793â€”10 is the year it began, GJ is grand jury, 3 is the conspiracy statute, 793 is espionage. They’ve been looking at Julian Assange to indict him for espionage. They’ve called witnesses that have come public before that grand jury about it.

The U.S. wants to get its hands on him, and they know that’s not going to be so easy from the U.K. The U.K. has a very robust fight against extradition. There’s a man named McKinnon there who hacked into a Pentagon computer, supposedly, has already fought for eight years. Julian has a lot of support in the U.K.

Sweden, they have a very rapid possible extradition procedure that they could use, and he doesn’t have the kind of support. The U.S. understands that. If he goes to Sweden, he is imprisoned immediately. Sweden doesn’t have a bail system. So there’s every reason for him to be terrified, in my view, of the U.S. ever getting its hands on him.

JAY: And the legal point here, if they do try to proceed against Julian Assange, is that they’re claiming or will claim that he didn’t just receive information from Bradley Manning; he somehow induced it or collaborated with Manning to get it.

JAY: And what’s happening with Bradley Manning? ‘Cause you would think that’s the only way they could do it is to get Manning to, quote-unquote, roll over on Assange.

RATNER: Assuming Manning knows anything, which is not clear to any of us, that is exactly right, Paul. They would want him to testify or roll over against Julian. And it’s not me making that up. The lawyer for Bradley Manning, David Coombs, has said openly in court that they are going after Manning with so much toughness, with wanting a 40-year sentence or whatever he said in court, because they want him to testify against Julian Assange. A remarkable story here in some way is that Bradley Manningâ€”whether he knows something or not I have no idea, or [whether] there’s even something to knowâ€”has so far not buckled to incredible torture in prison and a potential of a life sentence from a U.S. court. And so that’s remarkable.

I mean, the Manning case is a complete charade. Let’s just be honest about it. I’ve been down there. I mean, you’re in Baltimore. We should actually go together one day to Fort Meade, Paul, because it’s beenâ€”it’s extraordinary. It’s such secrecy, even of public documents, that we in the Center for Constitutional Rights had to bring a lawsuit, which on October 10 will be heard at the Court of Appeals for the Armed Forces, because they’re not allowing even public documents out of the Bradley Manning case. It’s a completeâ€”really, it’s just a kangaroo court, a secret tribunal. It’s outrageous. But it’s all an effort to bend Bradley Manning to their will, because, yes, they’re going to try and nail Bradley Manning. And, yes, he mightâ€”I don’t know what kind of sentence he’d get, but in the end they’re really after Julian Assange.

JAY: And what is the next stage of the Manning process?

RATNER: They’re going through motions. But the next one is an interesting one. There’s three days or so every month of hearings down at Fort Meade, and the next one is going to be in October, and it’s about the torture of Bradley Manning in the underground prison or in the prison he was in when heâ€”at Quantico, and where he was stripped completely naked, forced to stand at attention naked, you know, the whole business of what happened to him that the UN rapporteur called tantamountâ€”equivalent to, certainly, cruel and inhuman treatment, and then possibly amounting to torture.

So that’sâ€”Manning’s hearing is going to be on that issue and whether the charges have to be dismissed because of the way he was treated in pretrial detention. Now, this judge has been very stiff and wouldn’tâ€”I don’t expect that she’s going to allow these charges to be dismissed. I do suspect, as the lawyer for Manning has said, is that any sentence he might get perhaps will be reduced because of the inhumane way he was treated at Quantico.

And, of course, when we look at that, as Julian Assange’s legal team looks at that, you have to say: wait until they get their hands on Julian Assange. It’ll makeâ€”it won’t make Bradleyâ€”he’ll be treated as bad or worse than Bradley Manning.

RATNER: Thank you for being here, Paul.

JAY: And thanks for joining us on The Real News Network. Don’t forget, if you want to see more interviews like this, there’s a "Donate" button over here. If you don’t do that, we can’t do this.