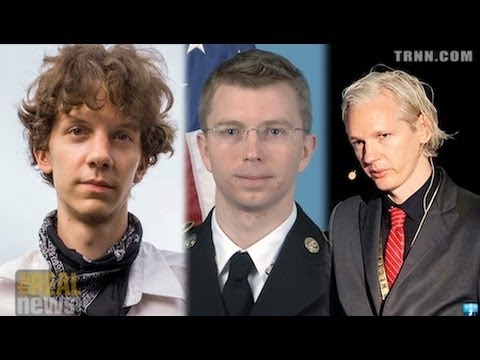 PAUL JAY, SENIOR EDITOR, TRNN: Welcome to The Real News Network. I’m Paul Jay. And welcome to this edition of The Ratner Report with Michael Ratner, who now joins us from New York City.

Michael is president emeritus of the Center for Constitutional Rights in New York. He’s the American attorney for Julian Assange and WikiLeaks. And he’s a board member of The Real News Network.

Thanks for joining us, Michael.

MICHAEL RATNER, PRESIDENT EMERITUS, CENTER FOR CONSTITUTIONAL RIGHTS: It’s always good to be with you, Paul.

JAY: So what have you been focusing on this week?

As I’m sure a lot of your listeners or viewers know, June 3, Monday, begins the actual trial of the Bradley Manning case, the young private first class accused of going into government computers and uploading 750,000 or so documents to my client, WikiLeaks. We’ll talk about that.

Last week, or actually this week as I speak to you, a couple of days ago I was in court as an observer of the guilty plea of Jeremy Hammond to hacking into a computer that’s a protected computer. It was that of a company called Stratfor, a private intelligence company, like a private CIA, that was engaged in corporate spying for corporate clients. It spied on activists having to do with Bhopal and trying to get Dow to pay for them and acknowledge the tragedy of Bhopal. It spied on PETA. It also came out in those emails, the 5 million emails of Stratfor, that there was a sealed indictment against my client, Julian Assange.

Well, Jeremy Hammond pleaded guilty in court to one count. He had a lot of supporters in court that day, 100 people there. He had a lot of dignity about doing it. [incompr.] ten-year count. The judge will sentence him on September 6. The demand is, by his supporters, that he be sentenced to time served and released. He’s a political activist. He’s a truth-teller.

But it’s what I call a week, both with Jeremy Hammond and, of course, Bradley Manning and Julian Assange, of our government’s engaging in what I call sledgehammer justice.

To stay for one more minute on Jeremy Hammond, Jeremy did read a statement, which I recommend to everybody. The heart of the statement really says openly and [incompr.] it wasn’t said in court, but it was released afterwards. “Now that I”–I’m reading from Jeremy’s–“Now that I have pleaded guilty it is a relief to be able to say that I did work with Anonymous to hack Stratfor, among other websites. Those others included military and police equipment suppliers, private intelligence and information security firms, and law enforcement agencies.” And then the key line in the statement: “I did this because I believe people have a right to know what governments and corporations are doing behind closed doors. I did what I believe is right.”

So can you get a more dramatic and important statement from someone who is facing ten years in prison and has already done 14 months? It’s great. It’s almost like an anthem for what we’re talking about with truth-tellers. So that’s that. And it was a very sad week in many ways for Jeremy. But as you said, he’s glad to get now to be able to speak about what he did. But it does again show a sledgehammer nature of justice.

JAY: Michael, there’s some kind of petition campaign going on?

RATNER: There is a petition campaign. You can go to Change.org or Jeremy Hammond’s support site and petition so that he gets time served. And what’s important about his case is the codefendants in his case, who were in the U.K., who were in Ireland, they received very small sentences compared to ten years. They got from zero to 32 months. And so that is what we’re looking at as a rule of comparison here. Jeremy Hammond ought to get time served. In my view he’s a heroic truth-teller and a heroic political activist.

And that brings us to a second aspect, which is the Bradley Manning trial which is coming up on June 3. Again, there we have Bradley Manning, who has now admitted to the reasons he went into the computers of the military that he was in and uploaded 750,000 documents to WikiLeaks, including what are known as the “Collateral Murder” video, the Iraq War Logs, the Afghan war logs, the State Department cables, and many other important documents. When he read his statement, he gave his political reasons for doing so, why each one bothered him in his conscience, and how he believed if the American people knew what their government was doing behind their backs and the killings and murders they were engaged in, they might not be as willing to support that government in carrying out those crimes.

Bradley Manning pleaded guilty to 20 years in prison a number of months ago. I was there, as I said, on that day. I’d hoped that that would be the end of the case against Bradley Manning. He’s 25 years old now. Think about it. He started doing this at 22. He pleaded guilty to 20 years. Get him out of jail when he’s 41 or 42 years old. You would think the government would say, we’ve taken our pound of flesh from this truth-teller, we’ve taken our pound of flesh from this whistleblower, from Bradley Manning; let’s get this case done with and be done with and accepted. But not this government right now.

JAY: Michael, what happens in Manning’s trial next week? He’s pleaded guilty to certain parts of this. What’s actually happening next week?

RATNER: The government now wants to convict him for life. And they’re going to go ahead with the more serious charges. And it’s an outrage to me, I mean, just a complete outrage.

Think about what it does to truth-telling. You think you’re ever going to get another Bradley Manning again? It’s hard enough. But think about facing the death penalty because somehow, even though you’re giving it to a media source, a media publisher, who could be you, Paul, [incompr.] it could be Times, you’re somehow aiding the enemy. And they’re going ahead with that charge. Every media person ought to be screaming.

So the whole thing is a charade in addition to the lawsuit the Center for Constitutional Rights, my office, has now on behalf of WikiLeaks, The Nation, Jeremy Scahill, Kevin Gosztola, and others to try and open up that proceeding so that even public documents which are now kept secret can be given to us.

Finishing with Bradley Manning, I mean, I would hope that everybody out there supports Bradley Manning, that they go to the demonstrations, visit his trial at Fort Meade, try and open that trial up, demand that the charges not go any further, demand actually that the people who should be tried here are the people who committed the crimes that both Jeremy Hammand and Bradley Manning exposed and that Julian Assange and WikiLeaks published. Think about it. They exposed huge torture scenes in Iraq, thousands [incompr.] civilians in Iraq, in Afghanistan, the “Collateral Murder” video. The people that should be held accountable here are not the people who were the truth-tellers and the publishers of truth but actually the people who were engaged in war crimes, criminality, and really incredible, incredible secret wars and corruption.

Julian Assange, a third part of this, was obviously, as–the publisher and the founder of WikiLeaks, is now in the embassy. We believe that the embassy in London–people say, well, he’s afraid to go to Sweden. In fact, he’s not afraid to go to Sweden to go with the allegations of sexual misconduct, but because that’s a one-way ticket to the United States, where he will be put into a prison and never, never be heard from again.

Our view about Julian Assange and Sweden is if the Swedish want to question him about what are allegations and not charges at this point, they ought to come to the embassy in London and do [incompr.] the United States. The fact they haven’t been willing to [incompr.] is an indication to me that they’re trying to get a hold of him to get him to the United States.

There’s a movie that’s come out [incompr.] Julian Assange [incompr.] We Steal Secrets: The Story of WikiLeaks, the story of WikiLeaks. It’s by Alex Gibney, who is a award-winning filmmaker. The movie does not do justice to Bradley Manning or Julian Assange. That movie is really not worth seeing. It’s not a fair movie. I can just give you one indication from the title itself, We Steal Secrets: The Story of WikiLeaks that’s [incompr.] that WikiLeaks, who’s a publisher, is actually stealing secrets, which of course goes right into the government’s theory that publishers are somehow, like their sources, involved in soliciting, baiting, fishing, coconspirators with their sources.

And there’s a current issue on that that’s come out, which is the story of James Rosen at Fox News. Fox News reported James Rosen recently had his phone records subpoenaed on the basis of the fact, as it says on the subpoena, that he was a coconspirator or an aider and abettor with his source of the information he was going to reveal–complete B.S., but that’s the way this government is moving. And so what I would say to Fox and others: stand up first–you should have been standing up for WikiLeaks when the government tried to claim that it was a coconspirator, and now you have to stand up for everyone. You [incompr.] standing up, major media, for Julian Assange and WikiLeaks. Now you have to stand up for all journalists and all whistleblowers who are trying to get the truth out of government that will do everything it can to make sure that we don’t know what it is doing behind closed doors.

JAY: Thanks very much for joining us, Michael.

RATNER: Thanks for having me, Paul. It’s always great to be on The Real News.

Irish Left Set to Win General Election, But Still Shut Out of Governing?