Ratner: NSA Surveillance Program Needs to be Torn Apart from Branch to Branch 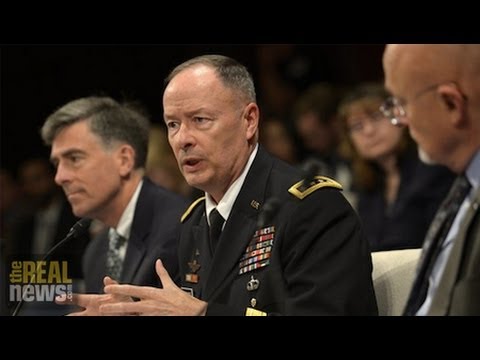 KAYLA RIVARA, TRNN PRODUCER: Welcome to The Real News Network. I’m Kayla Rivara in Baltimore. And welcome to another edition of The Ratner Report.

Now joining us is Michael Ratner. Michael Ratner is the president emeritus of the Center for Constitutional Rights in New York. He is also a board member and regular contributor for The Real News Network.

RIVARA: So there’s been a lot of attention surrounding the NSA lately. Can you give us an update as to what is transpiring around Washington right now?

RATNER: You know, it’s been a busy week, a busy ten days.

There’s four things that I want to talk about, but of course the most recent one is the White House review panel has issued a report on what it thinks ought to happen to the NSA. But let’s just go through four items that have happened, and then we’ll get to that as well.

One, we had a court decision out of the D.C. District Court, the federal court there, by a conservative judge, Judge Leon. It was a preliminary injunction, which means he didn’t make a final ruling, but he made a ruling that said it’s likely that the NSA mass spying on the metadata on Americans’ phone calls is unconstitutional and that it violates the Fourth Amendment. Now, it doesn’t take in all of what the NSA is doing. It doesn’t take in what the NSA is doing when it supposedly is spying on someone overseas and taking in and raking in, you know, tens of thousands, perhaps millions of American phone calls. But it does take in the metadata on American phone companies that has caused a huge amount of controversy.

And what the judge did is he said that the Fourth Amendment, the right to be free from searches and seizures, applies to the taking of metadata on our phone calls in respect to what the NSA is doing. And he ruled, basically saying, it’s likely unconstitutional and I want it stopped. He held the injunction until the court is–until the Court of Appeals gets it.

But it’s a huge, huge victory. It again demonstrates, of course, what the NSA is doing is crazy, what the 15 dozen or so judges on the secret court is completely, you know, outside of the Constitution. And, finally, we’ve got a courageous conservative district judge saying that. That’s one very important ruling.

The second thing that came out in a couple of articles about Edward Snowden: a National Security Agency official–in fact, I think the official who may lead the agency after the current head leaves–said that they would consider talking to Edward Snowden–or that he would–about giving him amnesty. He said that’s his personal opinion. And the reason he said that was not because of the good that Edward Snowden has done, but because what he fears is that Edward Snowden is holding on to hundreds of thousands or tens of thousands or at least much more, many more documents than certainly I or others know about, and that that can cause damage to the United States, and he might want to make a deal with Edward Snowden. Pretty interesting fact coming from the NSA. The Department of Justice and other officials oppose that, but who knows where that’s going to come out? That’s item number two.

Item number three is Edward Snowden wrote a letter to the people of Brazil about what was happening to them. It was an appeal for asylum as well. But to me the core of the letter was what he said to the people of Brazil is don’t kid yourself. The mass spying that is taking place in Brazil is not about stopping terrorism; it’s about the United States getting economic advantage, political advantage, and in the end it’s about power.

And that’s a very powerful statement. It’s one that every person who hears about NSA spying ought to understand. This is not about terrorism. This is about the U.S. empire, U.S. power, U.S. hegemony, probably an increase in the spying as the U.S. empire is on the decline and it has a different world to compete in than it did after the Second World War or after the collapse of the Soviet Union. So that’s the third point.

And the fourth is one that, of course, we’re dealing with this week, which is the White House review panel, some 300 pages long, gave 45 recommendations for reform of the NSA.

And I want to say, as I enter it–and I’ll close that discussion with this as well–is that we have to be very careful here about different organizations, different groups that suggest reform of the NSA, because in the end what we may see, unfortunately, is very superficial reform, leaving the heart of this massive spy structure in place. And I don’t want to hear people say, oh, this is a great report, you know, etc., etc., because it’s not that. We really have to get rid of the NSA root and branch. We have to get to its core. We have to stop what it’s doing.

But let’s go to the report for a second. The report was released earlier than it was, for–one reason that was given in the papers was that the internet companies were complaining that having all this massive spying and backdoors in internet companies, ways of getting into Google and all of the other companies, that was causing damage to the American economy, American businesses. People didn’t trust us. And therefore we have to show that we’re going to reform that system. That’s why they supposedly reached it early.

Another reason, in my view, they may have reached it early is there’s actually a piece of legislation pending in Congress called the U.S.A. Freedom Act. Now, that act is not perfect, but it’s better than the report that just came out. It goes farther. So it’s conceivable that this report came out as a way of undercutting what might be more serious legislation at really limiting the NSA.

Let’s go to the report for a second. Who made up the committee? A former CIA deputy director, a man named Cass Sunstein, whose partner, wife, Samantha Power, works for President Obama, the UN representative. Cass Sunstein did as well. The other people on the committee, you know, quite moderate to being government officials. So you don’t expect much from it. People seem to be happy that it did better than they thought, or at least some people do. I, for one, am not.

And the key thing that people have focused on–and we’ve heard gushing reports from people: oh, no more mass metadata surveillance, at least not by the NSA. What the report recommends is that metadata on all our phone calls be kept by the phone companies. So Verizon keeps it, T-Mobile keeps it, etc. They keep it. And then, when the NSA needs it, they ask for it.

Well, I don’t think that’s anything. That’s ridiculous. That’s still mass surveillance of all of our phone calls. That’s not a protection. It still risks civil liberties violations. It risks our privacy. No trust to it.

So the people who laud this report, I think, are just in dreamland, in dreamland somewhere.

The couple of other things that the report I want to bring up does: it says that world leaders before they’re surveilled should have a higher level of clearance, in other words, going higher up the chain of command before the NSA decides that it’ll spy on a world leader. You know, I can’t even–there’s no words for what that means. I mean, so it means that another bureaucrat is going to approve, you know, spying on Angela Merkel of Germany. It doesn’t make any sense.

A third point, though, is better, and other people, like the Electronic Frontier Foundation, who I respect, have actually lauded this part of it, saying the U.S. should not undermine efforts for encryption and should not make commercial security software vulnerable. What that means is when a company is building security software, the NSA should not require a backdoor into that security software where they can go into it.

On the other hand, they also rejected, as the president has, a civilian head of the NSA. A lot of your viewers may not know the NSA has to be, by law, headed by a military person, because it’s also combined with what’s called Cyber Command, which is a military wing. So rather than split those two jobs, they’re leaving it the same. I mean, I don’t think a civilian head would make a huge difference to us, but certainly it would be better than having a military head of the NSA.

So all of this positive reaction we’re getting, or a lot of it, about this report is just, in my view, misguided. I think one of the best people, the best groups that have talked about it is the Electronic Frontier Foundation, which has really openly said, as I said, that mass surveillance must end. In addition–again, the EFF have said this–is even under the putting over of the mass surveillance into the private phone companies, which is nonsensical, as I said, they’re still allowing the mass surveillance of my conversations overseas with all my clients, who are, I assume, all under surveillance by the government, whether it’s Julian Assange or Guantanamo families or others. So altogether the report is not great.

And as I said, I can’t stand the gushing about it. It’s important what Edward Snowden has done, that people are starting to react to it, that we’re starting to get some people talking about reforms. But the worst situation here would be to have superficial reforms, and then the country goes to sleep on the mass spying that’s still occurring.

As I said, the NSA has to be torn apart root and branch. It basically has to be gotten rid of. We have to start over and say, what’s necessary here? And what’s necessary can only be necessary in terms of surveillance with a court order, a warrant that allows such surveillance under the stringent standards of our Fourth Amendment. We can’t have this open and notorious mass spying.

So we’re moving along: a court decision, amnesty possible or at least talked about for Ed Snowden. But in terms of thinking of this review or this report as a panacea, let’s not go there.

RIVARA: Thank you so much for joining us, Michael Ratner.