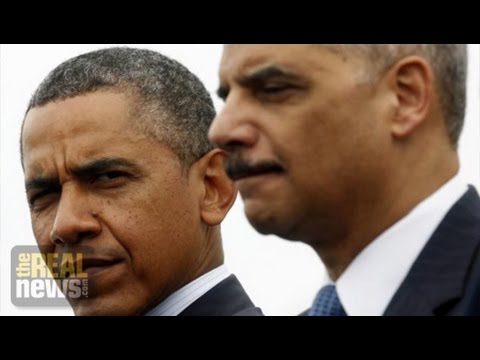 PAUL JAY, SENIOR EDITOR, TRNN: Welcome to The Real News Network. I’m Paul Jay in Baltimore. And welcome to the Ratner report. And now joining us from New York is Michael Ratner.

Michael is the president emeritus of the Center for Constitutional Rights in New York. He’s the U.S. attorney for Julian Assange. He’s also a board member of The Real News.

Thanks for joining us again, Michael.

MICHAEL RATNER, PRESIDENT EMERITUS, CENTER FOR CONSTITUTIONAL RIGHTS: Always good to be with you and The Real News, Paul.

JAY: So let me just start you off with a question. We know what the Ferguson grand jury decided: they’re not going to indict. There’s demands the federal government should intervene, President Obama, obviously Attorney General Holder. The question is: do you think that Michael Brown’s civil rights were violated? Should the federal government intervene?

RATNER: You know, I have no doubt that should intervene. I mean, if people listen to that press confidence by the prosecutor and the analyses that have been done by some lawyers of what was presented to the grand jury, it seemed like I one of the more biased presentations that I can recall. Of course, we don’t often see what happens in the grand jury.

But apparently the officer, Officer Wilson, was barely questioned, very easygoing, his story allowed to unfold before the grand jury. The people who, quote, contradicted his story were severely questioned, made to look like they might not be truth-telling in front of the grand jury. And then we come out with a no-indictment. I think that you could say that the prosecutor was aiming for that. His presentation certainly to the public made it seem that way.

In that case, there’s federal law that says when your civil rights are violated, essentially, when you’re murdered like that by a police department, that there is a federal crime. And you can investigate and indict people for that. That’s what was done throughout the South as the southern movement, as the Southern sheriffs–justice system refused to go after people: you had several federal civil rights complaints to the extent you could get the Justice Department to move. We’re in that situation today.

We see Holder and Obama still there. We don’t see any indication that they’re planning to start a federal investigation, federal grand jury. And so I find that to be remarkable. Particularly, it’s not like what happened to Michael Brown was the only case in the country. That’s one. We’ve had a couple in New York, recently a chokehold case, another one of a young black man murdered in a hallway of an apartment building. We have the 12-year-old killed in Cleveland. We’re talking about a national epidemic of the killing of black people. And it seems to me it’s absolutely imperative that the federal government step in here and start to tell these local police departments, you can’t kill with impunity the way you’re killing.

And certainly the people in the country are saying that. I mean, there was a demonstration in New York last night, which was the second night after, thousands of people everywhere in the city. Every street, even with traffic on it, was just closed down by people. They took over the streets, closed all the access to Manhattan. And that took place in 170 cities in this country. So the people in this country, particularly black people, are saying to this government, do something about this epidemic, this racial, racist police killing.

JAY: Right. Now, if you look at the Obama administration and Holder’s role, what’s their record on these kinds of issues?

RATNER: Well, the record I’ve been looking at lately in the last couple of weeks, Paul, is Obama and issues I work on having to do with national security. And it’s awful. It’s Obama basically being incredibly weak, bowing to national security establishment, the military, law enforcement, etc.

And there’s three examples that have come to my attention in the last ten days. One is National Security Agency spying. That’s the collecting of all of our metadata from our telephones that’s been going on now and going on for years, but to our knowledge since Snowden did the revelations a year and a half ago about the massive metadata spying. Obama gave speeches on it. He talks about it. He even said in the recent movie on Snowden, well, we were doing something about it. But in fact he hasn’t done anything and that what we had was the defeat last week of the USA Freedom Act, which was an attempt by Congress to begin to rein in some of the government spying, particularly this NSA program about massive metadata. It failed by two votes. They got 58 votes. They needed 60 in the Senate. It was a weak bill. This very administration, the Obama administration, had weakened it on privacy matters, on transparency. It failed by two votes. And therefore we have no law and we have a continuation of massive NSA spying.

Now, Obama and others blame Congress. Well, let’s not blame Congress here. While this may be authorized by the law according to the Foreign Intelligence Surveillance Court, it doesn’t mean the NSA has to do it. Today, tomorrow, last month, last year, next year, Obama could ban that NSA mass data surveillance immediately. It’s up to him. Let’s not let him put it off on Congress. Let Obama do something on it. So that’s one example.

A second example is what’s going on with the torture report now. Your viewers may be familiar with the torture report–6,300 pages issued by a Senate committee who investigated the CIA’s role in black sites and torture, 6,300 pages, apparently incredibly damning to the CIA, names names, names who did it, where they did it, how they authorized torture under Bush.

Have we seen a word of it, Paul? We haven’t seen a word. The 500-page summary was supposed to be released last month, the month before, the month before. Where is it being held up? The 500-page summary is at the White House. The White House is insisting on more and more redactions in the report. Senator Feinstein says, we’re not going to go along with that. You’re basically disabling that report from having any meaning. And so now we’re stuck again. But where is it being held up? Not even by Senator Feinstein, who’s very conservative on many of these surveillance issues. It’s being held up by Obama and the White House.

JAY: Yeah, I was going to say Feinstein has a reputation of being essentially the CIA’s representative on the Hill. They’ve had a fight recently over process. But the fact that Feinstein wants to let this stuff out and Obama doesn’t is kind of more damning.

RATNER: I agree with you. I mean, Senator Feinstein has been a sure thing for the CIA in Congress. And here she is, saying, get this report out. We’re only getting the executive summary, and Obama is holding it up. So that’s example two.

So we have NSA. We have a torture.

And the third one, of course, it’s close to me, because I brought the original Guantanamo cases, are Obama’s promise to close Guantanamo in a year of taking office. That would have been 2010, made the promise in 2009. We’re still–despite the recent seven releases, we’re still sitting with 142 people in Guantanamo, half of them cleared for release. Obama blames Congress for it. But, of course, Obama could do tomorrow what he’s blaming Congress for stopping today.

So you have those three cases, and then on top of it, as we started this show, is Obama’s incredible weakness on what’s going on in Ferguson. I mean, it’s utterly, utterly shocking to me that this president hasn’t taken more forcefulness with regard to these fundamental issues.

RATNER: You know, I think part of it is when there’s an effort actually in that town to actually take on their own Police Departments and there’s a difficulty in doing so–recently happened in New Orleans, where there were many, many killings of people, and I guess they just couldn’t look aside in that case. It happened in Philadelphia, as I recall, under Rizzo when there was just so many police killings you couldn’t ignore it.

I mean, Ferguson is particularly egregious. If you look at the fact that there’s 53 policemen in Ferguson, in a town that’s three-quarters black, three-quarters, 53 policemen, three of whom are black–think about that, a city council that’s–only has one black member out of six. The place is like a southern plantation town 100 years ago. And that’s what’s going on.

That the federal government hasn’t intervened is amazing. But as I said, I wouldn’t just depend on Obama and Holder, partly because they have clay feet, and partly because even if they do, you don’t want attention diverted now from the massive, massive demonstrations we’re seeing that are trying to force–force police departments, not just in Ferguson but around the country, to stop killing young black people.

JAY: Yeah, I agree. I think the Department of Justice demand, while people have a right to demand it, to have any kind of some idea that they’re really going to intervene in any serious way, is kind of delusional. The Department of Justice, I think, doesn’t like the most extreme excesses. They don’t want to see what happened after Rodney King. But once things kind of normalize, the abuse normalizes, there needs to be some method where people get engaged, get organized, and, number one, insist on some kind of civilian review boards with real power that hire and fire the police chief, to exercise real discipline over the police force. And even if you have a really good piece of legislation–we’ve been talking about this on The Real News–if there isn’t a mass movement to insist on the execution of this legislation, it usually doesn’t get used either. And the community really needs to do more than just protest, which–the protests are critical, but there needs to be some organization to assert some power.

RATNER: You know, I think that’s completely right. And what always concerns me, even with these massive demonstrations we’re seeing, is that it can fizzle out because there’s not enough organization and leadership in it. Hopefully that won’t be the case, that we’re seeing lung young leaders emerging in Ferguson and in other places that will be able to take this somewhere else. And we have seen an incredible escalation since the murder in Ferguson of–since the murder of Brown in Ferguson. It’s been increasing. So perhaps we’re at the verge of really something historic, really something incredibly historic.

JAY: Alright. Thanks very much for joining us, Michael.

RATNER: Thank you for having me, Paul, on The Real News.

JAY: And thank you for joining us on The Real News.

Stir Crazy! Episode #42: “A Riot is the Language of the Unheard”