Michael Ratner: 12 years after Guantanamo's opening, the prison holds 166 people, 86 who are cleared for release, after President Obama and Congress has failed to close it.

Michael Ratner: 12 years after Guantanamo's opening, the prison holds 166 people, 86 who are cleared for release, after President Obama and Congress has failed to close it. 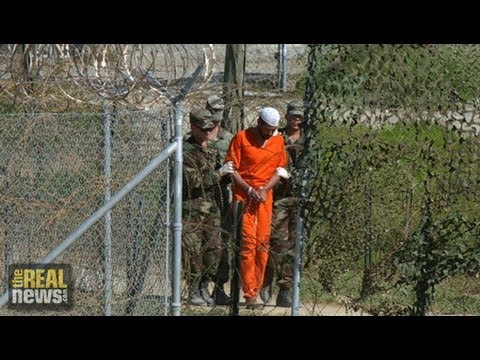 JAISAL NOOR, TRNN PRODUCER: Welcome to The Real News Network, and welcome to this latest edition of The Ratner Report.

MICHAEL RATNER, PRESIDENT EMERITUS, CENTER FOR CONSTITUTIONAL RIGHTS: Good to be with you again, Real News and Jaisal.

RATNER: You know, well, this week I’m sadly going to repeat an issue that we’ve been talking about now for some 12 years, not always on Real News, which didn’t exist back then. But it’s Guantanamo again. We just passed the 12th anniversary of the issuance of President Bush’s Military Order No. 1. That was November 13, 2001. And what’s extraordinary is that it’s still 12 years and it’s still open.

There’s 166 people still remaining there, 86 of whom have actually been cleared for release. Forty-six are serving what looks like a more or less at this point permanent indefinite detention, and the rest, some 34 or so, are possibly going to go to what I call rump or kangaroo trials.

I wanted to bring it up today, one, to remind people that Guantanamo is still open, and also because we have at least three events in the last week or so that are interesting with Guantanamo but not necessarily significant unless we actually get that place closed. I mean, obviously, Obama came into office, signed an order, said he would close it. Five years later, he hasn’t closed it yet. But we have had a couple of pieces of movement on some other issues.

The vote was 55 to 43. It doesn’t sound like a huge victory, but it actually is a victory in a Senate that has been a nasty piece of business for many years.

The House bill is far different. The House bill keeps the very heavy restrictions on moving people out of Guantanamo. And we’re going to have to see what happens in the next month or so when they try and reconcile those two bills.

So in some way there’s slight hope that the Senate’ll make it a little bit easier and give Obama some cover to help close Guantanamo. But in the end we have to say, this [incompr.] an Obama problem. This is a problem that he has been unwilling to have the courage to do what he could have done all along and could still do as I speak to you–close Guantanamo. He hasn’t done it.

So that was one important development this week.

A second one has Obama moving, again, a little bit, but so slowly, at such a snail’s pace, that it’s hard to imagine. You know, as I said, there are some 86 people that have been cleared for release. Those people should have been out of there yesterday. A majority are from Yemen. They could be sent to Yemen. Hasn’t done that. Forty-five have been in indefinite detention. And as I said, 25 to 32–some are already on trial, but 25 that are still being held for trial.

And what they finally set up or they’re in the process of setting up are periodic review boards that would actually–the detainee could go in front of them and say, well, I’m no–quote, no longer a danger, or your evidence isn’t sufficient. That was a promise made a number of years ago by Obama. Those review boards are finally being set up.

And then, of course, even if they rule favorably for a particular detainee, the question remains whether that person will be released. It’s still up to the president to find a place to send them.

So those are two of the issues. The third one is two people have appealed or tried to set aside guilty pleas that they made. One is David Hicks, an Australian. He was actually my and the Center for Constitutional Rights’s first client. The Center was the only civil liberties organization that had the nerve to take these cases on 12 years ago. David Hicks was the first client we had. He eventually pled guilty and did some time in Guantanamo and then got released to Australia.

He is now trying to set aside his conviction on the grounds that what he pled guilty to was not a crime under the laws of war. He has great precedent for that because recently a U.S. court held it–the crimes that he pled guilty to, along with another person, named Omar Khadr, who was the 15-year-old when he went into Guantanamo, again who was forced to plea rather than face life in prison there under abusive and torturous conditions, also pled to a crime that is not believed to be a military-commission crime, a war crime. So both David Hicks and Omar Khadr, two of the seven people convicted in these long 12 years at Guantanamo, are trying to set aside their convictions and very well may be able to do so.

I want to say in, really, closing that my fears are with Guantanamo that even if Obama gets up the nerve to try and transfer people out, many of them may go to Yemen, where I understand that the U.S. may be giving Yemen some money to build, essentially, a Guantanamo in Yemen, where people will be indefinitely detained, Guantanamo by another name. That’s not a closing of Guantanamo. Closing Guantanamo means closing and making unnormal or making abnormal the conditions and the principles that unfortunately are now the new normal. And those are that torture and abuse can be used in a camp. We know the U.S. has prosecuted no one for that, that you can have detention without trial–all those people in Guantanamo are there detained without trials; that when you decide to try someone, you can try them in a specially made up military tribunal or kangaroo court; and that people cleared can be kept forever.

Those principles, unfortunately, are the new normal. Underlying them is the key error that was made, that I and others criticized 12 years ago, which is treating alleged criminals–alleged terrorists, according to the government–outside of criminal law, but treating them under the laws of war and then picking and choosing the laws of war that you apply is completely illegal and has led to exactly what we have today on our hands, a Guantanamo that is very, very difficult–but shouldn’t be–but the president seems to be having difficulty in closing it.

Finally, to say there was a fight back, there is a fight back. There is still a hunger strike going on–obviously not the numbers that there were a few months ago, but still an important hunger strike. And I just urge all of the viewers of The Real News to take action to close Guantanamo. The Center for Constitutional Rights, among other places, has a website to visit. The Center lists all 166 prisoners remaining, who you can send mail to. You can also sign petitions, demonstrate, etc. So I just urge people to get in the act. Let’s finally close Guantanamo, and not just the physical prison, but the illegal, unconstitutional, immoral, and bankrupt principles that underlie.

NOOR: Michael Ratner, thank you so much for joining us.

RATNER: Thank you for having me at The Real News again.